A SMART(er) Way to Track Influenza

Brown University researchers have created a reliable and fast flu-detection test that can be carried in a first-aid kit. The novel prototype device isolates influenza RNA using a combination of magnetics and microfluidics, then amplifies and detects probes bound to the RNA. The technology could lead to real-time tracking of influenza. Results are published in the Journal of Molecular Diagnostics.

PROVIDENCE, R.I. [Brown University] — In April 2009, the world took notice as reports surfaced of a virus in Mexico that had mutated from pigs and was being passed from human to human. The H1N1 “swine flu,” as the virus was named, circulated worldwide, killing more than 18,000 people, according to the World Health Organization. The Centers for Disease Control and Prevention in the United States said it was the first global pandemic in more than four decades.

Swine flu will not be the last viral mutation to cause a worldwide stir. One way to contain the next outbreak is by administering tests at the infection’s source, pinpointing and tracking the pathogen’s spread in real time. But such efforts have been stymied by devices that are costly, unwieldy and unreliable. Now, biomedical engineers at Brown University and Memorial Hospital in Rhode Island have developed a biochip that can detect the presence of influenza by zeroing in on the specific RNA sequence and then using tiny magnets in a tube to separate the flu-ridden sequence from the rest of the RNA strand. The result: A reliable, fast prototype of a flu-detection test that potentially can be carried in a first-aid kit and used as easily as an iPhone. 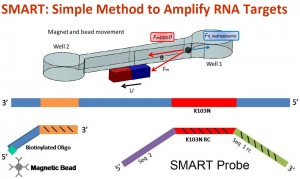 “We wanted to make something simple,” said Anubhav Tripathi, associate professor of engineering at Brown and the corresponding author on the paper, published in the Journal of Molecular Diagnostics. “It’s a low-cost device for active, on-site detection, whether it’s influenza, HIV, or TB (tuberculosis).”

The Brown assay is called SMART, which stands for “A Simple Method for Amplifying RNA Targets.” Physically, it is essentially a series of tubes, with bulbs on the ends of each, etched like channels into the biochip.

There are other pathogen-diagnostic detectors, notably the Polymerase Chain Reaction device (which targets DNA) and the Nucleic Acid Sequence Based Amplification (which also targets RNA). The SMART detector is unique in that the engineers use a DNA probe with base letters that match the code in the targeted sequence. This ensures the probe will latch on only to the specific RNA strand being assayed. The team inundates the sample with probes, to ensure that all RNA molecules bind to a probe.

“The device allows us to design probes that are both sensitive and specific,” Tripathi said.

This approach creates excess — that is, probes with no RNA partners. That’s OK, because the Brown-led team then attached the probes to 2.8 micron magnetic beads that carry the genetic sequence for the influenza RNA sequence. The engineers then use a magnet to slowly drag the RNA-probe pairs collected in the bulb through a tube that narrows to 50 microns and then deposit the probes at a bulb at the other end. This convergence of magnetism (the magnetized probes and the dragging magnets) and microfluidics (the probes’ movement through the narrowing channel and the bulbs) serves to separate the RNA-probe pairs from the surrounding biological debris, allowing clinicians to isolate the influenza strains readily and rapidly for analysis. The team reports that it tracks the RNA-probe beads flawlessly at speeds up to 0.75 millimeters per second.

“When we amplify the probes, we have disease detection,” Tripathi said. “If there is no influenza, there will be no probes (at the end bulb). This separation part is crucial.”

Once separated, or amplified, the RNA can be analyzed using conventional techniques, such as nucleic acid sequence-based amplification (NASBA).

The chips created in Tripathi’s lab are less than two inches across and can fit four tube-and-bulb channels. Tripathi said the chips could be commercially manufactured and made so more channels could be etched on each.

The team is working on separate technologies for biohazard detection. 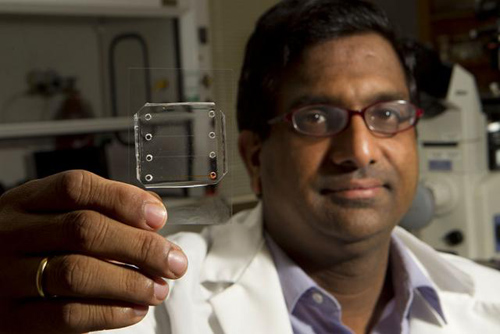 Anubhav Tripathi. “We wanted to make something simple. (This is) a low-cost device for active, on-site detection, whether it’s influenza, HIV, or TB.” Image Credit: Mike Cohea/Brown University

Stephanie McCalla, who earned her doctorate at Brown last year and is now at the California Institute of Technology, is the first author on the paper. Brown professors of medicine Steven Opal and Andrew Artenstein, with Carmichael Ong and Aartik Sarma, who earned their undergraduate degrees at Brown, are contributing authors.

The U.S. National Institutes of Health and the National Science Foundation funded the research.