A First Look at the Next Release of Windows Phone

REDMOND, Wash. – May 24, 2011 – Microsoft today provided the first official look at the next release of Windows Phone, code named “Mango.” The new release includes hundreds of new features that will deliver smarter and easier communications, apps and Internet experiences.

“When we looked ahead to the next release, we wanted to stay true to the principles of Windows Phone 7 – that software should get out of your way and quickly connect you to the things that matter most,” said Greg Sullivan, senior product manager of mobile communications at Microsoft. “Mango builds on the work that we did in Windows Phone 7 and extends a lot of key scenarios around communications, apps, and Internet experiences – with even more capability and a deeper level of integration.”

Mango will enable Windows Phone to expand into new markets and extend global reach and scale through support for a host of new languages and new partnerships with Acer, Fujitsu Limited and ZTE Corp. Microsoft said Mango will be available for free to all eligible Windows Phone customers when it’s available in the fall. 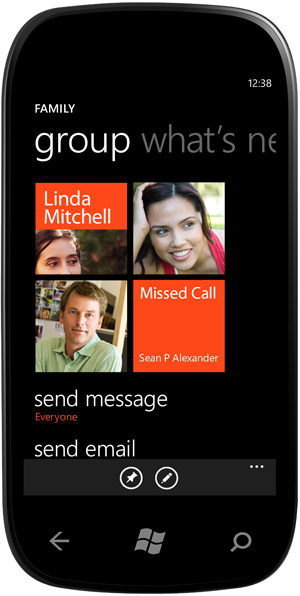 "Mango" will be available for free to all eligible Windows Phone customers when it’s available in the fall. Image credit: Microsoft

Sullivan said a key competitive differentiator for Mango lies in its smarter approach to apps. Today, he said, smartphones require that users rely solely on their brains to connect the dots between applications on their phones and any given scenario. Mango, however, relieves the burden on customers by assuming some of the burden itself. For example, the App Connect feature connects apps to search results and deepens their integration with Windows Phone Hubs – surfacing apps when and where they make sense.

For instance, if a user searches Bing for a movie, the search results, as you’d expect, provide information such as show times and theater locations. App Connect will take this further by anticipating the user’s need to buy a ticket and automatically surfaces the Fandango app to give him or her the option to buy a ticket right there.

“It’s like having a great butler or a valet that you’ve known for 30 years who can anticipate your every need instead you doing all the work yourself,” Sullivan said. “Windows Phone stitches all of this together for you and connects the applications you have on your phone, or that we have in the marketplace, to the rest of what you’re doing, in a way that’s much, much deeper than any other platform. So you can go from Binging to buying in seconds.”

The predictive nature of Mango signals a more intelligent era for the smartphone. This intelligence doesn’t simply benefit end users who need the right app in the right situation. Mango’s improved functionality also benefits companies and app developers looking for a unique way to reach consumers and on the “buy” end of the “Bing to Buy” scenario Sullivan noted.

“We’re really excited to be taking advantage the next release of Windows Phone and the new developer tools,” said Howard Gefen, director of marketing and business development for mobile at Amazon. “We can continue to incorporate features that our customers will enjoy and use, and continue to get the best experience out of the device and the platform.”

Other app features in Mango include:

“Our Friends Are People – They’re Not Apps

Microsoft said its next release of Windows Phone – available to consumers in early fall – was designed and organized around the person or group of people users want to communicate with rather than the various apps used to reach them.

Just like Windows Phone 7 was designed and organized to make communication easier, so too is its Mango update, Sullivan said. For example, Mango’s new People Hub will integrate all of the ways in which people interact. So, whether one is connected to a person on Facebook, Twitter, Outlook, LinkedIn, Windows Live Messenger or all of the above, these avenues to connectivity will be in one, easy-to-access location.

About the video: See some of the features users can expect to see in the next major release of Windows Phone, code-named “Mango.” Credit: Microsoft

Additionally, if a user wants to send a message to someone, Mango will automatically detect if that person is online so the user can select the best method of communication. If the intended recipient is signed into Windows Live, Mango will provide the option to send an instant message (IM). If not, a text is sent instead.

The next release of Windows Phone also allows users to group and categorize people based on how they fit into their lives. This enables users to send group texts or IM conversations to entire groups of family, friends, coworkers and so on.

“Our friends are people – they’re not apps,” Sullivan said. “Mango makes it super easy to put people first then lets users chose the way they want to communicate.”

Other communications features in Mango include:

In Mango, Microsoft has added hardware-accelerated graphics and Internet Explorer 9 with HTML5. This, the company says, will enable a faster mobile Web experience that mirrors the desktop.

Unlike competing platforms, Sullivan said Web content in Mango doesn’t return as a list of blue links the user must comb through. Rather, content is integrated, aggregated and presented in a more useful way.

“We take the Web beyond the browser,” Sullivan said. “So you’re not manually spelunking through websites to find what you’re looking for.”

Web browsing now also has an added layer that allows users to take advantage of functionality such as location awareness, the phone’s camera and its microphone.

The addition of augmented reality in Mango – a technology that integrates computer-generated images and sounds on a user’s screen to enhance their experience – is an excellent example of a better Internet experience. It has allowed some of Microsoft’s partners to make significant improvements to their apps.

For instance, by utilizing Mango’s new motion and camera API, developers at The History Channel were able to build History Here – an app that combines augmented reality, GPS, and The History Channel’s multimedia content to create an interactive mobile travel guide. By simply pointing the phone at ones surroundings, the app will display an overlay of historic points of interest close by.

“The new real-time augmented reality view brings historical content to life in a whole new way,” said Dan Suratt, executive vice president of digital media and business development at A+E Networks Digital (which owns The History Channel, Lifetime, Biography and other properties). “People can experience history in an exciting way, whether they’ve just stepped outside their home or travelled across the country.”

“For those who have seen the phone, you can see the light bulb go off,” Sullivan said. “It’s like they suddenly realize they should be expecting more from their smartphones. I think we’re set up to surprise a lot of folks with how big a leap we’ve taken with Mango.”