Be it through the Internet, Facebook, the local grapevine or the spread of disease, interaction networks influence nearly every part of our lives.

Scientists previously assumed that interaction networks without central control, known as self-directed networks, have universal properties that make them efficient at spreading information. Just think of the local grapevine: Let something slip, and it seems like no time at all before nearly everyone knows.

By observing interactions in ant colonies, University of Arizona researcher Anna Dornhaus and doctoral candidate Benjamin Blonder have uncovered new evidence that challenges the assumption that all interaction networks have the same properties that maximize their efficiency. The National Science Foundation-funded study was published in the Public Library of Science on May 20. 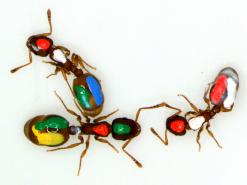 Singled out by unique color codes, ants provide evidence through their interactions that challenges previous assumptions about how social networks function. Photo courtesy of Benjamin Blonder

“Many people who have studied interaction networks in the past have found them to be very efficient at transferring resources,” said Blonder. “The dominant paradigm has been that most self-organized networks tend to have this universal structure and that one should look for this structure and make predictions based on this structure. Our study challenges that and demonstrates that there are some interaction networks that don’t have these properties yet are still clearly functional.”

“There are a huge number of systems that are comprised of interacting parts, and we really don’t have a good sense of how these systems are organized,” said Blonder. “Think of a city with many people or the Internet with many computers. You have all these parts doing their own thing and somehow achieving some greater function.”

The researchers chose to use ant colonies as models for self-directed networks because they are comprised of many individual components – the ants – with no apparent central organization and yet are able to function as a colony.

“We think no individual ant has a sense of purpose,” said Blonder. “It doesn’t go out one day and say: ‘I’m going to move this pebble for the greater good of the society.’ It has a behavioral program where if it sees a pebble, then it’s likely to move it. The reason that contributes to the good of the colony is an evolutionary argument where the ants’ behavior is shaped over thousands or millions of generations.” 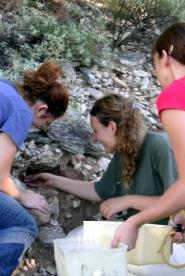 Dornhaus and Blonder studied colonies of Temnothorax rugatulus, an ant species that is common in southern Arizona.

“These ants like to live in little rock crevices such as underneath a rock or in a split in the rock,” said Blonder. “The trick is convincing them to go from their nice little home on Mount Lemmon to the lab.”

Which raises an interesting question: How does one collect an ant colony?

“It isn’t easy,” said Blonder. “You get an aspirator, which is a tube with a fine mesh on the end of it so you don’t inhale the ants, and you put the tube down in the colony and you suck. And the ants come up and you blow them out into a container to transport them to the lab.”

The queen, the mother ultimatum among ants, is the only member of the colony that reproduces. Without her, there would be no new ant workers and the colony would die.

“There is evidence that the queen secretes a chemical that makes the other workers recognize that she is the queen,” said Blonder. “But there’s not much evidence for the queen communicating with the workers in ways beyond that.”

Back in the lab, the ants were placed in artificial nests. “The nice thing about this species is that because they like to live in rock crevices, they’re also completely happy to live between glass slides. All we have to do is take two large glass slides, put a cardboard spacer in between them and the ants happily walk into that very nice thin space and live out their lives in this artificial nest,” said Blonder.

Having secured and relocated several ant colonies, the researchers tackled their second challenge: How to tell two ants apart.

“To understand an interaction network, you need to know who all the individuals are,” said Blonder. “You need to be able to tell any two individuals apart. We accomplished it by painting each ant with a unique color code.”

The researchers filmed the ants with high-definition video and recorded roughly 9,000 interactions between 300 to 400 individual ants. “We watched every single video repeatedly to make sure we didn’t miss any interactions and correctly identified every ant,” said Blonder.

While the ants do have limited vision, it’s thought that most of their sensory input comes through direct chemosensory touch.

Ants antennate, or touch each other with their antennae, for a variety of reasons such as to get another ant to move out of the way, to prod a particularly lazy individual into action or to solicit food. “Not all ants go out and forage for food,” said Blonder. “Often the ants that forage will have whatever they found in their guts and food is transferred from one ant’s stomach through mouth-to-mouth contact to the other ant. It’s called trophallaxis.” 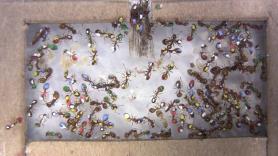 Ants pause in a video still of an ant colony filmed in the lab through a glass slide. "We want to understand how information can affect decision-making on the part of individuals," said Blonder. Image credit: University of Arizona

Contrary to predictions that ant networks would spread information efficiently in the same way as other self-directed networks, the researchers found that the ants actually are inefficient at spreading information.

This would represent a very efficient network, where it only takes six interactions for information to spread to all of the components. Ant interaction networks apparently function quite differently, indicating that other networks also might not be as efficient as previously thought.

“You could come up with a second simple expectation about how ants might behave,” said Blonder. “They could be just walking around completely randomly bumping into each other. We were able to show that the real ants consistently had rates of information flow that were lower than even that expectation. Not only are they not efficient, they’re also slower than random. They’re actually avoiding each other.”

“So this raises a big question: If you have this ant colony that is presumably very good at surviving and persisting, and there are a lot of good reasons to think it’s optimal to get messages from one part to the other, how come they don’t do it?” 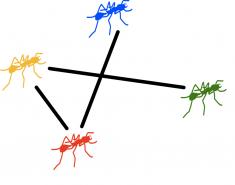 The study found that time is a crucial but often neglected factor in studying interactions between individuals. Blonder said: "We could imagine that if the yellow ant passed food on to the red ant, which could later give it to the blue ant. However, the blue ant has no option of giving anything to the yellow ant because that would require moving backward in time." Image credit: University of Arizona

One possible explanation is a concept most of us already are familiar with: “If you spend too much time interacting, then you’re not actually getting anything done,” said Blonder.

Another possibility is that individual ants are responsible for only their region and only need to communicate with other ants in that region.

The research also illustrates the importance of knowing when interactions occur. If two individuals interact and later one of them interacts with a third, then information from the first interaction could be passed to the third individual, but the third individual could not relay information back to the first. “That’s the ordering of events perspective that we’re bringing to this study and we’re hoping is going to catch on with other network studies. We think this is a real opportunity,” said Blonder.

Understanding how interaction networks function could have applications from allowing us to build self-directed networks to perform specific functions, such as unmanned drones to explore other planets, to preventing the spread of disease.

“Many of these ant species have been on the planet for millions of years, so clearly they’re doing something right,” said Blonder. “Perhaps we could learn from that.”