The Food and Drug Administration requires every drug they certify to be tested for certain poisons that damage patient health. The current gold standard for this is the limulus amoebocyte lysate (LAL) assay that involves using the blood of horseshoe crabs, which strangely enough is blue, to test for endotoxin, a substance commonly associated with many symptoms caused by bacterial infections.

But researchers at the Department of Chemical and Biological Engineering at the University of Wisconsin-Madison have found what may be a more effective way to test for endotoxin that involves liquid crystals, the same material used to make some flat screen computer monitors and televisions.

A May 19 article in Science Express describes the finding.

The surprise wasn’t that liquid crystals respond to the presence of endotoxin contamination, said Nick Abbott, the John T. and Magdalen L. Sobota professor of engineering at the University of Wisconsin, “but that they respond at such a low concentration–100,000 times lower than you would expect with adsorption. This makes the technology exquisitely sensitive to very low concentrations of endotoxin, and in this instance, very specific to bacterial endotoxin.” 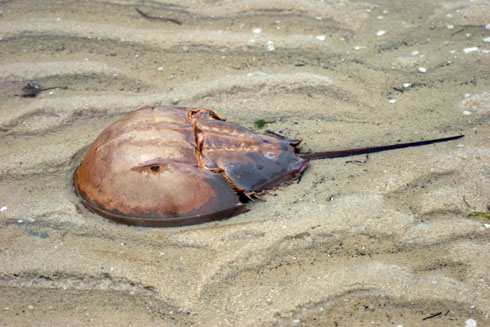 A recent discovery involving liquid crystals could lead to a replacement test for the presence of endotoxins. Current tests involve the use of horseshoe crab blood, which is blue due to a protein called hemocyanin, the oxygen-carrying pigment the blood contains. This image shows a horseshoe crab in sand at Monomoy National Wildlife Refuge, Mass. Image credit: Bill Perry, U.S. Fish and Wildlife Service

Currently, blood is taken from horseshoe crabs using a non-lethal method, but it can cost thousands of dollars per quart, making the test expensive. Due to the biological nature of the test, it is also subject to variations caused by the seasons and other factors that may interact with proteins in the blood.

But the new test gets around those problems. Here is how it works.

Liquid crystals have some of the properties of a liquid and some of a solid. The material can flow like a liquid, but the crystal molecules can line up in a structured way that resembles a solid. Researchers call this “ordering.” Ordering is influenced by the surfaces and contaminants the liquid crystals contact.

When studying how certain contaminants influence the ordering of liquid crystal droplets, UW researchers observed something unexpected: the ordering of the crystals is very sensitive to influence by bacterial endotoxin, meaning they could be used to detect the presence of endotoxin.

Additionally, one of the reasons liquid crystals are used in computer and television monitors is because changing their ordering also changes their optical properties. In this instance, that means the liquid crystals look different when endotoxin is present, making for an endotoxin test that is  very easy to read.

Researchers stress that this discovery is still in the early stages, and that it could be many years before a commercially available substitute for the LAL assay is fully developed.

“The tremendous gain in sensitivity makes this discovery very exciting,” said Mary Galvin of the National Science Foundation’s (NSF) Division of Materials Research about the new liquid crystal test. “The work also suggests new principles that may be used for the future design of high sensitivity, low cost sensors that can respond to biological substances.”

NSF provided support for this work via the Materials Research Science and Engineering Center (MRSEC) at the University of Wisconsin, which aims to address the science and engineering of nanostructured interfaces. One of three interdisciplinary research groups at this MRSEC, the Nanostructured Interfaces to Biology group is focused on the design and use of polymeric and liquid-crystalline materials.