A Country of Two Tales

China’s economy has undergone astounding growth during the past 60 years, with its gross domestic product (GDP) climbing from just under $18 billion in 1949 to almost $6 trillion in 2011. Most of that growth has occurred since 1980, when the country’s economic reform began.

The result? China has emerged from being known as “the world’s most populous country” to the “growth engine for the world’s economy.”

But the double-digit growth that China witnessed every year from 2003 to 2011 has slowed, leading to much debate about the seriousness of the downturn and how it will reverberate across the globe.

Jianguo Chen, director of the Confucius Institute at the University of Delaware, addressed these issues in a lecture, “Hard Landing? Soft Landing? A Country of Two Tales — China’s Economic Growth and Its Impact on the World,” at Jastak-Burgess Hall on Thursday, Nov. 15. 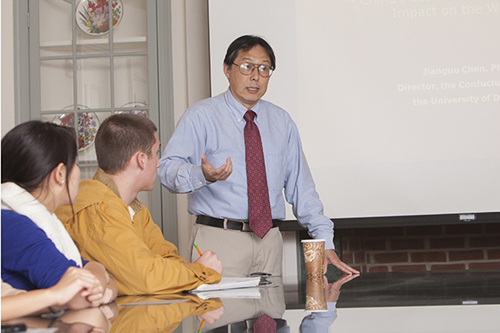 Jianguo Chen, director of the Confucius Institute at UD, delivers a lecture on China's economic growth and its impact on the world as part of International Education Week. Photo by Ambre Alexander

China’s economy surpassed Japan’s in 2010, becoming the second largest in the world after that of the United States. However, the country is characterized by stark demographic and topographic contrasts and plagued by territorial disputes, a weak housing market, and an income gap that Chen described as “almost intolerable.”

Despite these problems, Chen expressed confidence that China’s landing will be soft, with economic growth easing enough to control inflation and interest rates but remaining high enough to ward off a recession.

“A hard landing is not in the cards,” he said. “It will be a soft landing, but it will be bumpy.”

According to Chen, “state capitalism” is China’s ace in the hole. He explained that the term refers to an economic structure which lies somewhere between typical capitalism and a socialist planned economy. In state capitalism, the government functions like a huge corporation, and the economy is driven by policy rather than by the market.

Additional factors that will soften the landing include China’s large cash reserve, focused fiscal stimulus, and significant national assets in the form of state-owned enterprises, known as SOEs. These factors will also position China to overtake the U.S. economically sometime within the next decade. But that success won’t occur if the rural areas in the country’s western half aren’t developed and the income gap isn’t closed.

“China’s leaders will need to have the political wisdom and the moral courage to handle the situation in the right way,” Chen said.

The lecture was part of International Education Week (IEW), an annual celebration of international programs that was started by the U.S. Department of State and the Department of Education. IEW is observed across the United States and in more than 100 countries. The slate of activities at UD included panel discussions, films, lectures, galleries, ethnic foods, and an international fashion and talent show.

IEW at UD is a collaboration between the Office of Residence Life, the English Language Institute, the Confucius Institute and the Institute for Global Studies, with additional contributions from other offices and departments throughout campus. It was held from Nov. 12-16.