Revisiting Sex and Intimacy after Cancer

Two Yale doctors are using herbs, prescriptions, counseling and lifestyle advice to treat problems many women have been embarrassed to talk about—and improving their quality of life.

Noa Benjamini’s natural optimism didn’t flag when she was diagnosed with uterine cancer. “I knew it was treatable,” she recalls. She was recovering from surgery when she got her first hot flash. “That’s when I cried,” she says. Suddenly Benjamini saw herself careening toward old age. “I thought I’d shrivel up,” she says.

Three years later, Benjamini, 48, describes herself as “in a good place,” as a combination of herbs, prescriptions, and diet and exercise have tamed her menopausal symptoms. She attributes that turnaround to the Sexuality Intimacy and Menopause Clinic at Smilow Cancer Hospital at Yale-New Haven. 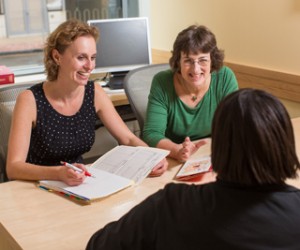 Drs. Elena Ratner and Mary Jane Minkin provide a patient with options that can range from medical prescriptions to lifestyle changes. Photo by Robert Lisak

After a thorough evaluation, the specialists offer women a wide array of services, including acupuncture, individual or couples counseling, medical and herbal remedies, Reiki, and even a Zumba class designed for cancer survivors.

More than 6 million American women are cancer survivors, according to the Centers for Disease Control. The treatments that saved them can cause life-altering symptoms. The problems can be embarrassing for women to discuss with their doctors, or they can be dwarfed by concerns about the cancer.

“I think many cancer specialists are of the belief that the patients sort of adopt: You’re a survivor; you should be happy,” says Dr. Minkin.

But Dr. Ratner recalls a woman she’d been seeing for years following treatment for cervical cancer. The patient was going through her second divorce, and with some gentle questioning, revealed that she hadn’t had sex in eight years. “I thought that this is how things are after this kind of surgery,” the patient told her.

Dr. Ratner helped her find solutions to the physical pain intercourse brought on as a result of the surgery and connected the woman to a therapist to address the fear of recurrence that hung over relationships.

Medical, behavioral specialists are a team

The medical and behavioral health providers work together, explains Fehon, to develop a suggested course of treatment. Women may see a psychologist for a brief course of cognitive behavioral therapy or couples counseling. The cancer experience can also bring up past traumas that need to be addressed through longer-term treatment, says Fehon. In those cases, patients can be connected to community providers. 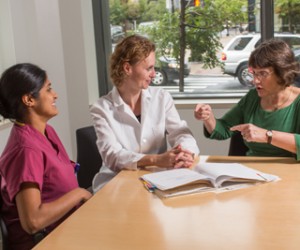 “As a provider, it’s very rewarding, because you’re able to help someone who’s in a very vulnerable part of their lives,” says Dr. Fehon. His goal is to help cancer survivors realize they can “still lead a meaningful, good life.”

Increasingly, the clinic serves women who have mastectomies and oophorectomies in their twenties or thirties because of a genetic predisposition to cancer. Counseling these women ahead of their treatment about the menopausal symptoms they’ll experience is critical, says Dr. Ratner.

Dr. Minkin adds that many of these patients can be helped by estrogen, a remedy she says is underused because of fears not borne out by research. “There are definitely people who shouldn’t be taking it, but there are people who can take it with very good effect,” she says.

Benjamini, who now lives in Massachusetts, makes regular trips back to New Haven to visit the clinic. The clinic helped her address a number of menopausal symptoms, often through lifestyle changes. Before her cancer diagnosis, Benjamini had lost 40 pounds. After surgery, hormonal changes led to weight gain. Losing weight, despite strict dieting, was a slow process. Her doctors encouraged her to increase her physical activity, and used prescription medicines and herbal remedies to address her hormonal issues.

Benjamini is now shopping for smaller sized clothes. Much of her weight loss is her own doing—three strength training classes and two cardio classes a week, plus she just signed up for tai chi. But she says her doctors played a huge role. “They helped me stay young,” she says. “They helped me not to feel defeated.”