A Better Route to Xylan

After cellulose, xylan is the most abundant biomass material on Earth, and therefore represents an enormous potential source of stored solar energy for the production of advance biofuels. A major roadblock, however, has been extracting xylan from plant cell walls. Researchers with the U.S. Department of Energy (DOE)’s Joint BioEnergy Institute (JBEI) have taken a significant step towards removing this roadblock by identifying a gene in rice plants whose suppression improves both the extraction of xylan and the overall release of the sugars needed to make biofuels.

The newly identified gene – dubbed XAX1 – acts to make xylan less extractable from plant cell walls. JBEI researchers, working with a mutant variety of rice plant – dubbed xax1 – in which the XAX1 gene has been “knocked-out” found that not only was xylan more extractable, but saccharification – the breakdown of carbohydrates into releasable sugars – also improved by better than 60-percent. Increased saccharification is key to more efficient production of advanced biofuels.

“In identifying XAX1 as a xylan biosynthetic protein, the first enzyme known to be specific to grass xylan synthesis, we’ve shown that xylan can be modified so as to increase saccharification,” says Henrik Scheller, who heads JBEI’s Feedstocks Division and directs its Cell Wall Biosynthesis group, and also holds an appointment with Lawrence Berkeley National Laboratory (Berkeley Lab). “Our findings provide us with new insights into xylan synthesis and how xylan substitutions may be modified for increased biofuel generation.” 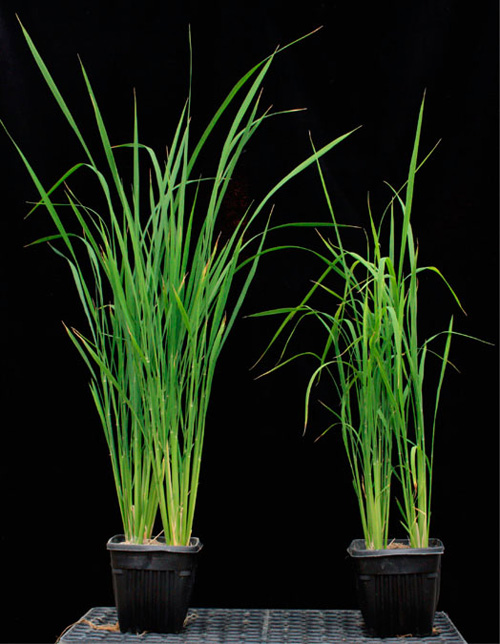 Wild type (left) and xax1 rice plants at five weeks show the dwarfed phenotype of the mutant. Xax1 may be short of stature, but it is long on potential for biofuels thanks to more extractable xylan and increased saccharification. Image credit: Berkeley Lab

Scheller is a co-author of a paper describing this work that has been published by the Proceedings of the National Academy of Sciences (PNAS). The paper is titled “XAX1 from glycosyltransferase family 61 mediates Xylosyl transfer to rice xylan.” The corresponding author is Pamela Ronald, who holds joint appointments with JBEI and the University of California (UC) Davis. Other authors were Dawn Chiniquy, Vaishali Sharma, Alex Schultink, Edward Baidoo, Carsten Rautengarten, Kun Cheng, Andrew Carroll, Peter Ulvskov, Jesper Harholt, Jay Keasling and Markus Pauly.

As a source of transportation energy, advanced biofuels synthesized from lignocellulosic biomass in grasses and other non-food plants have the potential to replace fossil fuels that are responsible for the annual release of nearly 9 billion metric tons of excess carbon into the atmosphere. Unlike ethanol made from corn or sugarcane, advanced biofuels can be dropped into today’s vehicles with no impact on performance, and used in today’s infrastructures with no modifications required. Advanced biofuels are renewable and carbon-neutral, meaning their use does not add excess carbon to the atmosphere.

Xylan, like cellulose, is a major component of plant cell walls that serves as a valuable source of human and animal nutrition. Despite its importance, few of the enzymes that can synthesize xylan-type polysaccharides have been identified. It is believed that xylan plays an essential structural role in plant cell walls through cross-linking interactions with cellulose and other cell wall components.

“Xylan is of particular interest for the improvement of feedstocks for the generation of cellulosic biofuels, a currently expensive and inefficient process,” says Ronald.

“Xylan inhibits access of the enzymes that break down cellulose into sugars and is an additional substrate for cross-linking to lignin, all of which contributes to the recalcitrance of plant cell walls.” 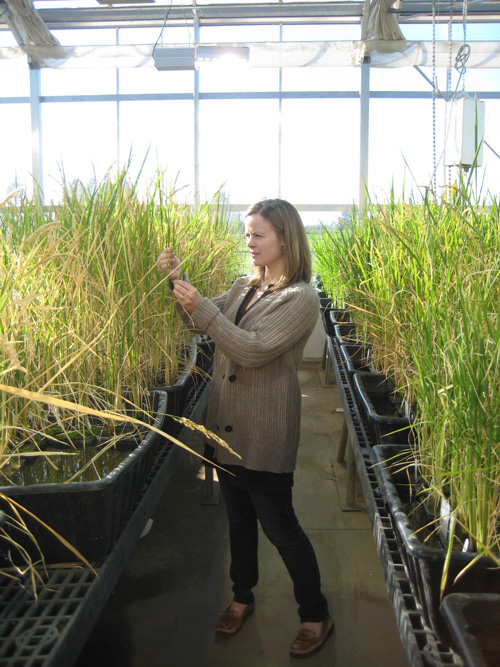 Dawn Chiniquy was part of a research team that identified XAX1 as the first enzyme known to be specific to xylan synthesis in grasses. Image credit: Berkeley Lab

To find genes important for grass xylan biosynthesis, Ronald, Scheller and their co-authors focused on the GT61 family of glycosyltransferases. GT61 enzymes have been identified through bioinformatics as being expanded in grasses and containing grass-specific subgroups. Working with rice plants, the standard plant model for studying grasses, they conducted a reverse genetics screen of 14 genes with insertional rice mutants that are highly expressed members of the GT61 family. This led them to the identification of a mutant plant they named xax1 because its mutation resulted in the function of the XAX1 being knocked-out.

“XAX1 adds a specific xylose sugar to the arabinose substitutions on the xylan chain that creates more cross-links between xylan and lignin, making the plant cell walls less amenable to the production of biofuels,” says Dawn Chiniquy, first author of the paper who is now with the Energy Biosciences Institute. “Without a functioning XAX1 gene, there were fewer cross-links with lignin, which made the xylan more extractable and also increased saccharification.”

Subsequent assays showed the rice xax1 mutant plants to be deficient in ferulic and coumaric acid, aromatic compounds whose residues on arabinose are known to promote cross-linking between xylan chains the lignin. On the down-side, the xax1 mutant did yield a dwarf phenotype, but Scheller says he and his colleagues have already found a way to avoid the dwarf phenotype.

“We can apply the same principle used to make rice plants more easily saccharified to bioenergy crops,” Scheller says. “With the ability to modify cross-linking between xylan and lignin by targeting a glycosyltransferase, we also now have a potentially important new biotechnological tool for grass biofuel feedstocks.”

This research was primarily funded by the DOE Office of Science.