A new study published online in the journal Human Reproduction finds that the greater the inconsistency in the length of sperm, particularly in the tail (flagellum), the lower the concentration of sperm that can swim well. The finding offers fertility clinicians a potential new marker for fertility trouble that might trace back to how a patient’s sperm are being made.

PROVIDENCE, R.I. [Brown University] — Perhaps variety is the very spice of life, but as a matter of producing human life, it could be the bane of existence. That’s the indication of a new study in the journal Human Reproduction that found men with wider variation in sperm length, particularly in the flagellum, had lower concentrations of sperm that could swim well. Those with more consistently made sperm seemed to have more capable ones.

“Our study reveals that men who produce higher concentrations of competent swimming sperm also demonstrate less variation in the size and shape of those sperm,” said Jim Mossman, a postdoctoral scholar at Brown University and lead author of the paper published in advance online Oct. 28. “It suggests that in some cases, testes are working more optimally to produce high numbers of consistently manufactured sperm, and vice versa.”

At the University of Sheffield, where Mossman did his doctoral studies, he and his co-authors measured the heads, midpieces, and flagella of 30 sperm per man, from 103 men randomly selected from a pool of about 500 who were recruited for a larger fertility study. They also measured other characteristics of each man’s semen, such as sperm concentration and motility, that the World Health Organization recognizes as important markers of fertility.

“The WHO suggests that measurements should be made on multiple components of sperm, but generally it’s only the sperm head that is considered,” Mossman said. “No one’s ever looked at this before across sperm components. What we show is that measurements on other sperm parts, such as the flagellum that propels the sperm, can provide additional information about the quality and consistency of sperm manufacture.” 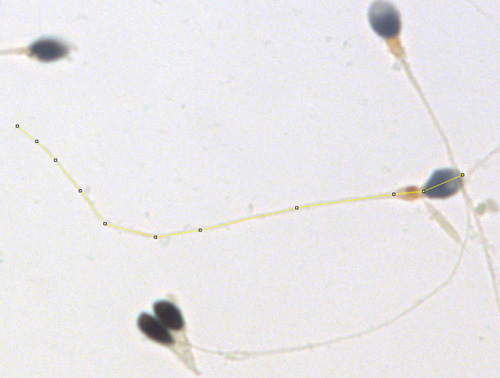 Good swimmers of uniform size Variations in sperm length, particularly in the tail (flagellum), indicate a lower concentration of sperm that swim well. Researchers apply the segmented line to measure the length of the sperm. Image credit: Jim Mossman/Brown University

The result of the novel analysis yielded two overall findings. One was that men who had higher mean flagellum length, total sperm length, and flagellum-to-head length ratios had higher concentrations of motile sperm. But perhaps the more interesting finding was that the greater the inconsistency of length in the sperm a man manufactures, particularly with regard to the flagellum, the lower his concentration of sperm that could swim well.

“The finding could give clinicians new insight into the diagnosis and treatment of male fertility problems, which accounts for up to 50 percent of the cases where couples struggle to conceive,” Mossman said. The research suggests that at least in some men, measurable inconsistency in sperm length may be a sign of trouble with his process of making sperm, a process known as spermatogenesis. That trouble, akin to a manufacturing line with poor quality control, could result in a lower concentration of good swimmers.

“This could be an indirect marker of testis function,” Mossman said.

Mossman acknowledged that there is nothing in the study that suggests what might cause spermatogenesis problems that would result in either inconsistent lengths or low concentrations of motile sperm.

“There are so many factors that govern sperm production, including environmental factors, genetic factors, and their interaction,” Mossman said. “As an andrologist and evolutionary biologist, I am very interested in what causes this variation and how that affects the phenotype of the sperm and its fertility potential.” 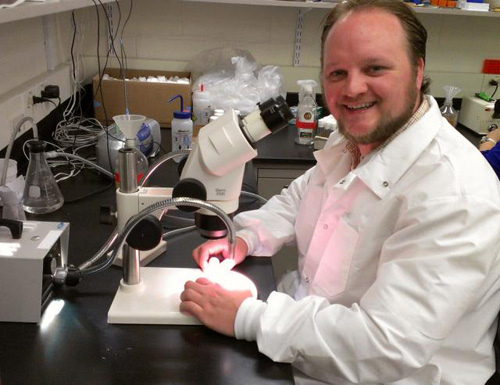 Jim Mossman. “No one’s ever looked at this before across sperm components. What we show is that measurements on other sperm parts, such as the flagellum that propels the sperm, can provide additional information about the quality and consistency of sperm manufacture.” Image credit: David Orenstein/Brown University

At Brown since earning his Ph.D. at Sheffield, Mossman has been working in the lab of David Rand, professor of biology in the Department of Ecology and Evolutionary Biolog, using fruit flies to study the influence of genetics on male fertility.

In addition to Mossman, the paper’s other authors are Jack Pearson, Harry Moore, and Allan Pacey, all of the University of Sheffield, which funded the research.