The University of Delaware ranks third in study abroad participation among U.S. public doctoral institutions, according to the 2012 Open Doors report released Nov. 13 by the Institute of International Education (IIE).

During the 2010–11 academic year, more than one out of every three UD students (34.7 percent) studied abroad. Most pursued “short term” programs of eight weeks or less.

In study abroad participation overall, among public and private institutions, UD ranked 30th compared to 29th last year, but moved up a slot, from fourth to third when compared to other public doctoral universities, exceeded only by the College of William and Mary and by Miami University.

Participation in study abroad at UD historically has been strong. The University is said to have “invented” the concept, taking the first class of students to Paris in 1923. The University will celebrate the program’s 90th anniversary in 2013.

According to Nancy Guerra, UD’s associate provost for international programs and director of the Institute for Global Studies (IGS), the University is continuing to develop and enhance its study abroad programs by engaging students in research, service and internship activities overseas, as well as domestically.

“Through programs in Africa to India to Washington, D.C., our students have the opportunity to put their knowledge and talent to work, as they learn firsthand about other cultures,” Guerra said. “It’s a powerful combination that connects students to communities and gives students a deeper understanding of the world — a perspective increasingly important to future careers.” 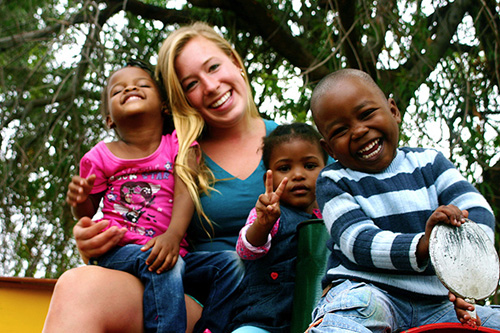 This winter, UD faculty will be leading 50 programs, on every continent but Antarctica, according to Lisa Chieffo, IGS associate director of study abroad.

“The students going on these programs have some great experiences ahead of them, from helping to deliver babies in South Africa as part of a program targeted at nursing students, to learning the Spanish language through an intensive immersion program in Panama,” Chieffo said.

Overseas study continues to be popular among UD students, and increasing numbers of international students also want to come to UD.

The release of Open Doors marks the beginning of International Education Week, which is being celebrated at UD through a variety of special events and activities. Visit the website for the full schedule.

Open Doors is published by the Institute of International Education, which has conducted an annual statistical survey of the international students in the United States since 1919, and in partnership with the U.S. Department of State’s Bureau of Educational and Cultural Affairs since 1972. The report also covers numbers of international scholars at U.S. universities; international students enrolled in pre-academic Intensive English Programs; and U.S. students studying abroad.