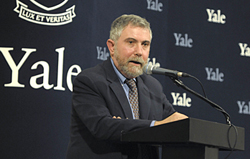 Nobel Prize-winning economist and New York Times columnist Paul Krugman had some generally dismal news for the near capacity audience that came to Sprague Hall on Tuesday for his Jackson Institute-sponsored town hall meeting.

The gathering, aimed at undergraduates, was held in conjunction with Krugman’s visit to Yale to receive the Henry E. Howland Memorial Prize, one of the highest honors that the University bestows.

Krugman was introduced by President Richard C. Levin; the two were briefly colleagues in Yale’s Department of Economics in the 1970s. He kicked off the Q&A with background on the current economic situation.

It had long been an article of faith among economists, he noted, that a catastrophe like the Great Depression would never happen again. It was generally believed that, with the Federal Reserve regulating monetary policy and the federal government holding the fiscal reins, there might be fluctuations, but essentially the economy would stay on track. Most economists were sanguine about the floundering of the Japanese economy in the early 90s, figuring it would be short-lived, he added.

Krugman, though, was troubled. “I had a nightmare,” he said, paraphrasing Martin Luther King. As the Japanese slump dragged on, Krugman found himself part of a small cadre of colleagues, which he dubbed the “Japan worriers” (the group included then-Princeton professor of economics Ben Bernacke), who saw intractable Japanese deflation as a sign that America might experience a similar economic crisis.

In fact, Krugman lamented to the Yale audience, things are worse than they imagined. “The difference between us and Japan in 1995 is that we’re actually worse off, with much higher unemployment and much greater human misery,” he said. Unlike Japan, he pointed out, the United States lacks the social safety net of other developed countries to mitigate the suffering.

What he hadn’t predicted, he said, was the opposition both to fiscal measures by the federal government and attempts by the Federal Reserve to use monetary policy to rebalance the economy.

Krugman, who won the Nobel Prize in Economics in 2008, finds the doctrinaire call for a balanced budget misguided, citing advanced countries whose economies have thrived with enormous debt loads. “Belgium and Italy had 100% GDP [Gross Domestic Product] debt levels in the 90s without suffering an economic crisis,” he said.

He has famously criticized the Obama administration for not having created a much larger stimulus package when the president had the political capital to do so. The government could afford to spend $1.2 trillion on an ambitious Works Project Administration program to fix the nation’s infrastructure, he contends.

“I would like to see more Federal spending on highway construction projects and less on fixing the lights in railroad stations,” he said.

Yet despite his gloomy prediction that the American economy would be at best stagnant for the foreseeable future — and more likely caught in a downward spiral of deflation — Krugman still demonstrated a sense of humor.

“The economy is not in collapse,” he deadpanned to one of his questioners, “It is, rather, under a long siege.”

Referring to the trade imbalance of global markets, caused in large measure by China’s protectionist policies and “the biggest example of currency manipulation in the history of the world,” Krugman suggested that the U.S. increase NASA’s budget, “to find another planet to export to.”

Asked if the Obama administration or the Federal Reserve might have any strategies that might help the economist “sleep at night,” Krugman replied. “There’s so little they can do, so I watch old movies.”

While not exactly ending on a positive note, Krugman did say that, next to other planets, emerging markets are the closest thing the U.S. has as potential as future trading partners.

In response to one student who asked about the future on the microeconomic level, Krugman actually sounded hopeful. “There will be some successful businesses, and individuals can still do well.”

After a very brief pause, he added, “but it’s a good thing you’re a freshman.”