Researchers at Brown University have created an implant that appears to deter breast cancer cell regrowth. Made from a common federally approved polymer, the implant is the first to be modified at the nanoscale in a way that causes a reduction in the blood-vessel architecture that breast cancer tumors depend upon, while also attracting healthy breast cells. Results are published in Nanotechnology.

PROVIDENCE, R.I. [Brown University] — One in eight women in the United States will develop breast cancer. Of those, many will undergo surgery to remove the tumor and will require some kind of breast reconstruction afterward, often involving implants. Cancer is an elusive target, though, and malignant cells return for as many as one-fifth of women originally diagnosed, according to the American Cancer Society.

Would it be possible to engineer implant materials that might drive down that rate of relapse? Brown University biomedical scientists report some promising advances. The team has created an implant with a “bed-of-nails” surface at the nanoscale (dimensions one-billionth of a meter, or 1/50,000th the width of a human hair) that deters cancer cells from dwelling and thriving. Made out of a common federally approved polymer, the implant is the first of its kind, based on a review of the literature, with modifications at the nanoscale that cause a reduction in the blood-vessel architecture on which breast cancer tumors depend — while also attracting healthy breast cells.

“We’ve created an (implant) surface with features that can at least decrease (cancerous) cell functions without having to use chemotherapeutics, radiation, or other processes to kill cancer cells,” said Thomas Webster, associate professor of engineering and the corresponding author on the paper in Nanotechnology. “It’s a surface that’s hospitable to healthy breast cells and less so for cancerous breast cells.” 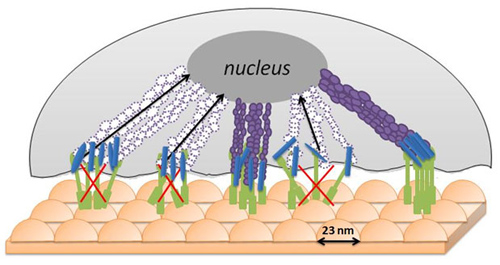 A selectively inhospitable surface. A bumpy “bed of nails” surface does not allow cancerous cells to gather the nutrients they need to thrive — possibly because cancerous cells are stiffer and less flexible than normal cells, which can manage the bumps and thrive. Image credit: Webster Lab/Brown University

Webster and his lab have been modifying various implant surfaces to promote the regeneration of bone, cartilage, skin, and other cells. In this work, he and Lijuan Zhang, a fourth-year graduate student in chemistry, sought to reshape an implant that could be used in breast reconstruction surgery that would not only attract healthy cells but also repel any lingering breast-cancer cells. The duo created a cast on a glass plate using 23-nanometer-diameter polystyrene beads and polylactic-co-glycolic acid (PLGA), a biodegradable polymer approved by the FDA and used widely in clinical settings, such as stitches. The result: An implant whose surface was covered with adjoining, 23-nanometer-high pimples. The pair also created PLGA implant surfaces with 300-nanometer and 400-nanometer peaks for comparison.

In lab tests after one day, the 23-nanometer-peak surfaces showed a 15-percent decrease in the production of a protein (VEGF) upon which endothelial breast-cancer cells depend, compared to an implant surface with no surface modification. The 23-nanometer surface showed greater reduction in VEGF concentration when compared to the 300-nanometer and 400-nanometer-modified implants as well.

It’s unclear why the 23-nanoneter surface appears to work best at deterring breast-cancer cells. Webster thinks it may have to do something with the stiffness of malignant breast cells. When they come into contact with the bumpy surface, they are unable to fully wrap themselves around the rounded contours, depriving them of the ability to ingest the life-sustaining nutrients that permeate the surface.

“This is like a bed-of-nails surface to them,” Webster said.

“I would guess that surface peaks less than 23 nanometers would be even better,” Webster added, although polystyrene beads with such dimensions don’t yet exist. “The more you can push up that cancerous cell, the more you keep it from interacting with the surface.”

Webster and Zhang next plan to investigate why the nanomodified surfaces deter malignant breast cells, to create surface features that yield greater results, and to determine whether other materials can be used.

The National Institutes of Health’s National Center for Research Resources and the Hermann Foundation funded the research. Michael Platek at the University of Rhode Island helped with the electron spectroscopy for chemical analysis.