Chickens can’t speak, but they can definitely make themselves heard. Most people who have visited a poultry farm will recall chicken vocalization – the technical term for clucking and squawking – as a memorable part of the experience.

Researchers now believe that such avian expressiveness may be more than idle chatter. A collaborative project being conducted by the Georgia Institute of Technology and the University of Georgia is investigating whether the birds’ volubility can provide clues to how healthy and comfortable they are.

And that could be valuable information. Economically, chickens rule the roost in Georgia, where poultry is the top agricultural product with an estimated annual impact of nearly $20 billion statewide. There is industry concern about the welfare of the animals they raise; anything that helps growers reap a maximum return on every flock – while maintaining an environment conducive to their well-being – can translate to important dividends for the state’s economy.

“Many poultry professionals swear they can walk into a grow-out house and tell whether a flock is happy or stressed just by listening to the birds vocalize,” said Wayne Daley, a Georgia Tech Research Institute (GTRI) principal research scientist who is leading the research. “The trouble is, it has proved hard for these pros to pinpoint for us exactly what it is that they’re hearing.”

Nevertheless, scientists are convinced that poultry farmers are detecting something real. Recent research at the University of Connecticut’s Department of Animal Science indicates that it is indeed possible to differentiate how the birds react to various conditions based on their vocalizations. 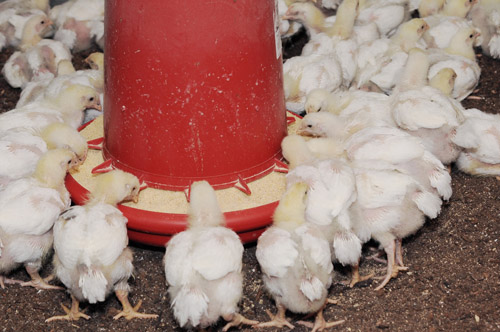 Poultry scientists are working with digital signal processing specialists and food processing experts from Georgia Tech in an effort to assess the condition of flocks from their collective vocalizations. (Image credit: Gary Meek)

“The behavior of chickens is one of the best and most immediate indicators of their well-being,” said Bruce Webster, a University of Georgia poultry science professor who is working on the project. “Chickens are vocal creatures and produce different types of vocalizations at different rates and loudness depending on their circumstances.”

So the Georgia Tech/University of Georgia team is working to identify and extract specific vocalization features that will bear out both the anecdotal observations and the previous scientific work. The researchers are performing stress-related experiments on small flocks, recording the birds’ reactions on audio and video and analyzing the results.

GTRI is providing expertise in control-systems development and image processing, while Georgia Tech’s School of Electrical and Computer Engineering is contributing audio signal-processing technology and the University of Georgia is providing research facilities as well as guidance in experimental design as they relate to animal behavior and welfare issues.

“If what experienced farmers hear and sense can be defined and quantified, sensors to detect cues from the birds themselves could really make a difference in providing real-time information on house environment, bird health, and comfort,” said Michael Lacy, head of the Department of Poultry Science at the University of Georgia. 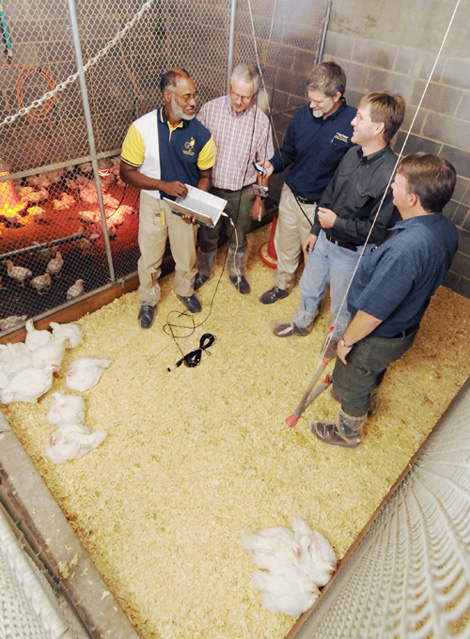 The work is funded by the Agricultural Technology Research Program, a state-supported effort to benefit the poultry and food-processing industries.

“That’s where being able to judge the flock’s behavior can be so important,” Daley said. “Your temperature sensors might say that things are fine, but the birds could be telling you that they think it’s a bit too warm or other changes have occurred to make the conditions less than ideal.”

From a poultry professional’s viewpoint, the flock’s opinion is probably the definitive one. Chickens take only six weeks to go from hatching to finished weight; stressful conditions can retard their growth, reducing their value when they go to market.

“Contract poultry producers are paid by the pound of birds sent to market. Improving the overall health and productivity of the birds will help to improve the bottom line for individual producers,” said Casey Ritz, a University of Georgia associate professor of poultry science who is involved in the research.

The research team has conducted several experiments in which they have exposed flocks to mildly stressful environmental changes. For example, temperature or ammonia levels might be increased from their initial settings for a few hours, then returned to the original level.

The researchers have recorded the flocks’ vocal reactions to the experiments, with video also collected in many instances. To date, more than four terabytes of bird-vocalization audio has been gathered.

Almost at once, the researchers encountered a knotty problem as they recorded bird sounds. They discovered that the large fans necessary for air circulation in a grow-out house can be considerably louder than the chickens, making it difficult to capture bird vocalizations effectively.

David Anderson, a professor in the Georgia Tech School of Electrical and Computer Engineering, has been working on the best methods for harvesting useable bird sounds from the noisy environment. It’s a classic audio signal-processing problem, he said, in which the signal of interest must separated from the noise that surrounds it.

“We have several approaches for extracting poultry voicing from the others noises, and we’ve been pretty successful in achieving that,” he said. “What makes this different from most other bird-song research is that we’re not listening to individuals, we’re listening to sounds in the aggregate. It’s like trying to understand what people are saying in a restaurant, when all you hear are the murmurings of a hundred diners.”

To decode mass poultry vocalizing, Anderson is extracting particular features of the sound, such as speed, volume, pitch and other qualities. Then he’s utilizing machine learning – in which computers recognize complex patterns in data and make decisions based on those patterns – to analyze the extracted features and determine which characteristics may convey specific meanings.

“These are initial experiments, and we’re going to have to test under a variety of conditions, but we’ve had considerable success already,” Anderson said. “By listening to the flock we can accurately tell when the birds are experiencing particular kinds of stress, such as significant temperature changes.”

In addition to ensuring high yield flocks, bird-vocalization analysis could save poultry growers money in equipment costs as well, Anderson suggested. For instance, he said, currently available ammonia sensors are both expensive and short-lived. If a system consisting of a few microphones and the right computer algorithms could take over ammonia-detection tasks, it would help reduce costs for the entire industry.

To date, video of the flocks hasn’t produced results as useful as the sound recordings, said GTRI’s Daley. But image processing of flock-reaction video continues, and could yield significant data down the road.

“This multi-disciplinary, multi-institution project highlights the different skills necessary to tackle current problems,” Daley said. “This approach will be valuable in years to come as we tackle a variety of problems to help the industry continue to be profitable and sustainable.”