Yale School of Medicine researchers have discovered that a variant of a gene linked to heart disease also increases the risk of deadly aneurysms of blood vessels in the brain. The discovery of this link raises hopes for new treatments for intracranial aneurysms, which affect more than a half million people worldwide annually.

“Existing drugs already target this common pathway and, in the future, could help treat or prevent aneurysms in people who are at risk,” said Murat Gunel, professor of neurosurgery, genetics and neurobiology and senior author of the study, published the week of Nov. 21 in the Proceedings of the National Academy of Sciences. 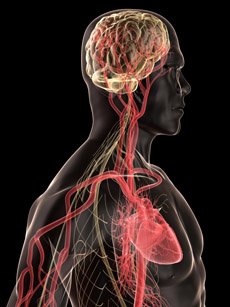 A variant of a gene linked to heart disease is linked with the risk of bursting blood vessels in the brain, Yale researchers have found. Image credit: Yale University

Intracranial aneurysms, or bursting blood vessels in the brain, often strike without warning in people 40 to 60 years of age. Under the leadership of Gunel and Richard Lifton, Sterling Professor and chair of the Department of Genetics at Yale and an investigator for the Howard Hughes Medical Institute (HHMI), an international team of scientists has conducted a massive analysis of the genes of tens of thousands of aneurysm patients and control subjects searching for variants that increase the risk of the condition.

The new survey of nearly 20,000 people conducted at the Yale Center for Genome Analysis is the third to identify genetic risk factors of aneurysms. The analysis identified three additional regions of DNA associated with the condition, bringing the number of variants associated with aneurysm risk to eight.

Most intriguing to researchers was that one of those variants was close to the endothelin receptor type A gene, which is important in the maintenance of the vasculature, determining vessel tone and elasticity. Problems with endothelin signaling have been associated with many cardiovascular disorders, including vessel spasm (vasospasm) after bleeding due to brain aneurysms, atherosclerosis, heart disease, and constriction of blood vessels in hypertension. This is the first study linking endothelins to brain aneurysm formation and possibly rupture.

Gunel said it is not clear whether the gene variant acts by decreasing repair activity in the endothelial walls and increasing the risk of hemorrhage or by being too active and spurring the creation of plaques that cause artherosclosis. Both would increase the risk of aneurysms. “Understanding the biological effects of this risk variant would potentially allow us to design smart therapies,” he added.

Katsuhito Yasuno is the first author from Yale. Other Yale authors include Mehmet Bakircioglu, Kaya Bilguvar, Ali Ozturk and Shrikant Mane. A total of 28 authors from 15 institutions in 8 countries contributed to this large-scale study, which was funded by Yale, the National Institutes of Health and HHMI.