On the Road to Plasmonics with Silver Polyhedral Nanocrystals

The question of how many polyhedral nanocrystals of silver can be packed into millimeter-sized supercrystals may not be burning on many lips but the answer holds importance for one of today’s hottest new high-tech fields – plasmonics! Researchers with the U.S. Department of Energy (DOE)’s Lawrence Berkeley National Laboratory (Berkeley Lab) may have opened the door to a simpler approach for the fabrication of plasmonic materials by inducing polyhedral-shaped silver nanocrystals to self-assemble into three-dimensional supercrystals of the highest possible density.

Plasmonics is the phenomenon by which a beam of light is confined in ultra-cramped spaces allowing it to be manipulated into doing things a beam of light in open space cannot. This phenomenon holds great promise for superfast computers, microscopes that can see nanoscale objects with visible light, and even the creation of invisibility carpets. A major challenge for developing plasmonic technology, however, is the difficulty of fabricating metamaterials with nano-sized interfaces between noble metals and dielectrics. 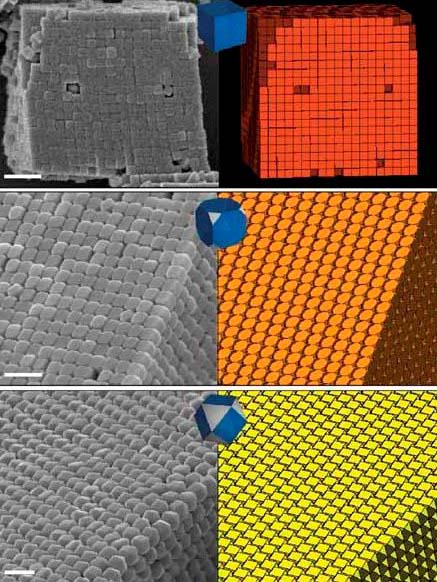 On the left are micrographs of supercrystals of silver polyderal nanocrystals and on the right the corresponding diagrams of their densest known packings for (from top-down) cubes, truncated cubes and cuboctahedra. (Image courtesy of Berkeley Lab)

Peidong Yang, a chemist with Berkeley Lab’s Materials Sciences Division, led a study in which silver nanocrystals of a variety of polyhedral shapes self-assembled into exotic millimeter-sized superstructures through a simple sedimentation technique based on gravity. This first ever demonstration of forming such large-scale silver supercrystals through sedimentation is described in a paper in the journal Nature Materials titled “Self-assembly of uniform polyhedral silver nanocrystals into densest packings and exotic superlattices.” Yang, who also holds appointments with the University of California Berkeley’s Chemistry Department and Department of Materials Science and Engineering, is the corresponding author.

“We have shown through experiment and computer simulation that a range of highly uniform, nanoscale silver polyhedral crystals can self-assemble into structures that have been calculated to be the densest packings of these shapes,” Yang says. “In addition, in the case of octahedra, we showed that controlling polymer concentration allows us to tune between a well-known lattice packing structure and a novel packing structure that featured complex helical motifs.” 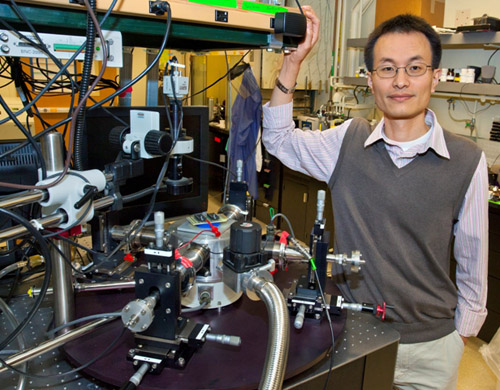 In the Nature Materials paper Yang and his co-authors describe a polyol synthesis technique that was used to generate silver nanocrystals in various shapes, including cubes, truncated cubes, cuboctahedra, truncated octahedra and octahedra over a range of sizes from 100 to 300 nanometers. These uniform polyhedral nanocrystals were then placed in solution where they assembled themselves into dense supercrystals some 25 square millimeters in size through gravitational sedimentation. While the assembly process could be carried out in bulk solution, having the assembly take place in the reservoirs of microarray channels provided Yang and his collaborators with precise control of the superlattice dimensions.

“In a typical experiment, a dilute solution of nanoparticles was loaded into a reservoir that was then tilted, causing the particles to gradually sediment and assemble at the bottom of the reservoir,” Yang says. “More concentrated solutions or higher angles of tilt caused the assemblies to form more quickly.” 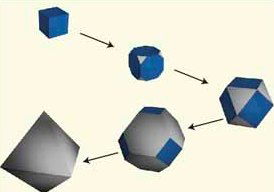 The assemblies generated by this sedimentation procedure exhibited both translational and rotational order over exceptional length scales. In the cases of cubes, truncated octahedra and octahedra, the structures of the dense supercrystals corresponded precisely to their densest lattice packings. Although sedimentation-driven assembly is not new, Yang says this is the first time the technique has been used to make large-scale assemblies of highly uniform polyhedral particles.

”The key factor in our experiments is particle shape, a feature we have found easier to control,” Yang says. “When compared with crystal structures of spherical particles, our dense packings of polyhedra are characterized by higher packing fractions, larger interfaces between particles, and different geometries of voids and gaps, which will determine the electrical and optical properties of these materials.”

The silver nanocrystals used by Yang and his colleagues are excellent plasmonic materials for surface-enhanced applications, such as sensing, nanophotonics and photocatalysis.   Packing the nanocrystals into three-dimensional supercrystals allows them to be used as metamaterials with the unique optical properties that make plasmonic technology so intriguing.

“Our self-assembly process for these silver polyhedral nanocrystals may give us access to a wide range of interesting, scalable nanostructured materials with dimensions that are comparable to those of bulk materials,” Yang says.

This research was supported in part by the Defense Advanced Research Projects Agency and DOE’s Office of Science.