EAST LANSING, Mich. — An inexpensive drug that treats Type-2 diabetes has been shown to prevent a number of natural and man-made chemicals from stimulating the growth of breast cancer cells, according to a newly published study by a Michigan State University researcher.

The research, led by pediatrics professor James Trosko and colleagues from South Korea’s Seoul National University, provides biological evidence for previously reported epidemiological surveys that long-term use of the drug metformin for Type-2 diabetes reduces the risk of diabetes-associated cancers, such as breast cancers.

The research appears in the current edition of PLoS One.

“People with Type-2 diabetes are known to be at high risk for several diabetes-associated cancers, such as breast, liver and pancreatic cancers,” said Trosko, a professor in the College of Human Medicine’s Department of Pediatrics and Human Development. “While metformin has been shown in population studies to reduce the risk of these cancers, there was no evidence of how it worked.” 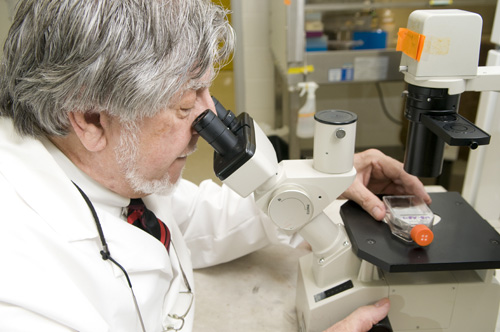 James Trosko, a professor of pediatrics and human development in the College of Human Medicine. Photo by G.L. Kohuth

For the study, Trosko and colleagues focused on the concept that cancers originate from adult human stem cells and that there are many natural and man-made chemicals that enhance the growth of breast cancer cells.

Using culture dishes, they grew miniature human breast tumors, or mammospheres, that activated a certain stem cell gene (Oct4A). Then the mammospheres were exposed to natural estrogen – a known growth factor and potential breast tumor promoter – and man-made chemicals that are known to promote tumors or disrupt the endocrine system.

“While future studies are needed to understand the exact mechanism by which metformin works to reduce the growth of breast cancers, this study reveals the need to determine if the drug might be used as a preventive drug and for individuals who have no indication of any existing cancers,” he said.

“Though we still do not know the exact molecular mechanism by which it works, metformin seems to dramatically affect how estrogen and endocrine-disrupting chemicals cause the pre-existing breast cancers to grow.”

In addition, further research needs to be done with human cultures to see if metformin can reduce the risk of pancreatic and liver cancers in Type-2 diabetics as well, he said.