*Three volunteers who make a difference*

A murmur runs through the audience as Bob Kriel withdraws his gloved hand from a darkened cage in the front of a small lecture room.

On the glove sits Bubo, a great horned owl. With his piercing eyes and imperial demeanor, this large bird with mottled gray feathers instantly dominates the room.

Kriel, a retired physician who still does clinical research at the University of Minnesota, volunteers weekly at the U’s Raptor Center, where sick and injured birds of prey receive treatment. 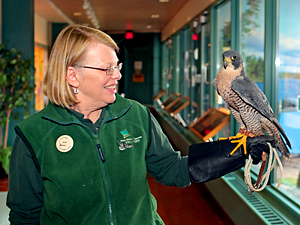 Kriel and fellow volunteer Sue McCarthy, a retired elementary teacher, help care for the birds. They also lead tours and educational programs on the natural history of birds of prey and how to conserve them.

“We get a lot of young owls that have fallen out of their nests,” Kriel tells the crowd (this one is mostly older adults). “We encourage people to leave the young ones alone.” Chances are, he explains, the owls aren’t orphans.

Suddenly, Bubo puffs out his throat and hoots. “That was a little bit of a mating call. It’s mating season,” Kriel says.

From another cage McCarthy takes Artemis, a peregrine falcon. Standing still on McCarthy’s arm, the bird gives little hint that her species has been clocked at up to 242 mph.

Kriel, McCarthy and other Raptor Center volunteers go through a several-months-long educational process, but they never stop learning. 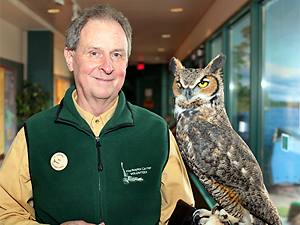 “I’ve discovered how birds have individual personalities. You learn to respect that,” McCarthy says. “And I’m amazed at how preschoolers identify so much with birds. I had one father tell me he had an autistic son. He told me, ‘My son reacted so well—I was worried about bringing him here to a new place.’

“But something clicked. That young child felt an emotional attachment to a bird.”

Over in an archaeology lab on the west bank of the Mississippi, Keith Manthie points out some breakages in the ribs of an ancient human skeleton.

“I’m mending them,” he says. And as a volunteer, he has no time pressure. So “if it takes two months to fix a skeleton, I have the time to do it right.”

Now a mainstay of the Department of Anthropology, Manthie is fulfilling a lifelong dream.

“All I want out of this is to call myself an archaeologist,” he says. 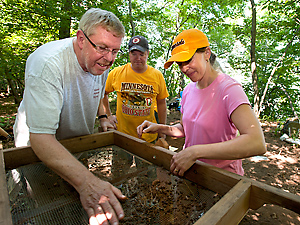 In his six years as a volunteer, Manthie, now retired, has taken part in four major excavations: a Roman cemetery in ancient Corinth, Greece (“Every day I walked by where the apostle Paul was,” he muses); a multilevel structure in County Roscommon, Ireland; a Neanderthal site in the Czech Republic; and Bremer Village in Minnesota. And he loves helping students.

“The department labs wouldn’t run without him,” says John Soderberg, managing director of the Evolutionary Anthropology Laboratory. “He helps us out in innumerable ways.”

For one, he worked with a graduate student studying the marks left on bones by various predators. They studied the remains of rabbits eaten by Raptor Center birds, including pellets of bone and other indigestible material spit out by owls.

“Once, we had a big pile of rabbit guts and such in the lab, and we tricked people we knew were squeamish into coming in and looking,” Manthie chuckles. “But really, the most exciting thing is that I’m helping out graduate students working on new projects. For example, the bone studies were to help us learn to determine if excavated bones were fractured by hominins or wild animals.” That, he says, gives a clue as to what those ancient humans were, or weren’t, eating.

“People think I’m rich because I don’t work [for money],” he notes. “But instead of a nice new car, I have experiences.”

And he gets to call himself an archaeologist.