Former secretary of state Henry A. Kissinger gave an address before Yale faculty, students and World Fellows during a ceremony to celebrate the establishment of the Kissinger archives and the Johnson Center for the Study of American Diplomacy.

The archives extend well beyond Kissinger’s years in the White House and span the nearly 40 years since he left public service. Kissinger’s papers will serve as the foundation for the newly created Johnson Center, made possible by generous contributions from Charles B. Johnson ’54 B.A. and Nicholas F. Brady ’52 B.A. The Center will be located within the Jackson Institute for Global Affairs at Yale. 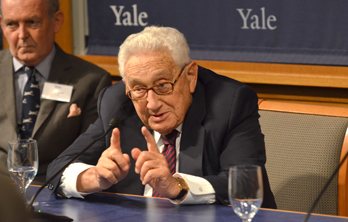 President Richard C. Levin along with James Levinhson, director of the Jackson Institute, and Professor John Lewis Gaddis, director of the Brady-Johnson Program in Grand Strategy, spoke at the ceremony, which took place at the Greenberg Conference Center.

“It is a great honor and privilege to have his work now affiliated with Yale,” said Levin of Kissinger. “His notes on conversations with world leaders, his own reflections and memoirs are an amazing source of commentary about the world situation over a long period of years by one of the most sophisticated thinkers of our time.”

“Dr. Kissinger’s long and illustrious career as a public servant and his prominent role in shaping key foreign policies that define our world today, will serve as a tremendous inspiration to our students,” said Levinhson, noting that the Johnson Center will bring to campus distinguished scholars who will prepare Yale students for global leadership.

According to Gaddis, Kissinger’s memoirs are filled with “timeless, transferrable aphorisms that will be passed down and cherished for years to come.”

Kissinger expressed his hope that his archives would shed insight into the inevitable issues facing the world and the future role of U.S. foreign policy.

He noted that he learned immensely from and was inspired by Gaddis and Yale Professors Paul Kennedy, Charles Hill, Jonathan Spence and Donald Kagan.

Before the ceremony, Kissinger participated in a discussion with Gaddis, Kennedy and Hill during the Grand Strategy seminar. Kissinger answered questions from the seminar students about his recently published book, “On China,” which was required reading for the course.

Read “Yale to receive Kissinger papers and establish the Johnson Center for the Study of American Diplomacy.“