*Scientists have endless ideas for extraterrestrial exploration. Some are feasible, some not. In a two-part series, we look at how UA engineer Roberto Furfaro gives the red or green light to space missions. First, searching for Delta-V, the complex factor that makes a space mission viable.*

Our solar system is becoming a familiar backyard, thanks to the University of Arizona’s Lunar and Planetary Laboratory, or LPL, a world leader in interplanetary exploration.

LPL’s Phoenix Mission to Mars scooped up the first evidence of water-ice on the Red Planet, and its HiRISE camera continues to beam stunning images of the Martian landscape back to Earth.

Today, LPL leads the billion-dollar OSIRIS-REx mission, which will launch in 2016 and bring back a pristine asteroid sample in 2023. 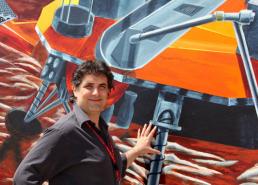 Assistant Professor Roberto Furfaro stands by the mural on the wall of LPL's OSIRIS-REx Science and Processing Operations Center in Tucson, Ariz., which is home to his Space Systems Engineering Laboratory. Image credit: University of Arizona

While science drives these missions, engineering expertise is essential to their success. Roberto Furfaro, an assistant professor for UA’s systems and industrial engineering department, is among those providing vital in-house support for LPL efforts.

The simulations can create multiple “what-if” mission scenarios, as well as operation readiness tests in which scientists conduct dry runs of daily operations to head off problems before the real mission starts.

Developing an optimized mission plan and designing spacecraft starts with the science goals, Furfaro explained. Then it’s a matter of finding an efficient trajectory that uses the least propellant to reach the target planet or asteroid.

“You have propulsion systems, attitude and control subsystems, structural considerations, power systems and communications needs,” Furfaro said. “This all translates into a delta-V budget, which determines how much propellant you need, which determines how big the fuel tanks need to be and whether that results in a viable spacecraft.”

Delta-V is change in velocity.

The total budget is determined by how many times the spacecraft needs to change course or velocity, and is influenced by the boost it can get from deep space maneuvers and gravity assists from the sun and planets.

And Delta-V budgets are complex, multivariable problems. When one parameter changes, the others change as well.

Meanwhile, the number of science experiments and their complexity is limited by the on-board power resources that support instruments, memory storage and communications data transfer.

The next step involves nuts-and-bolts structural calculations to produce a preliminary physical design that can be handed off to Lockheed-Martin or another contractor for final spacecraft design and construction.

Mike Cupples, a lead simulation engineer for Tucson’s Raytheon Missile Systems, is MDTOP’s primary author. He and Furfaro now are refining the tool to improve its performance in analyzing missions to asteroids.

“Mike is volunteering his own time to help me build the SSEL infrastructure and open the door to many space projects,” Furfaro said.

“Our collaboration is covered under an agreement that allows UA and Raytheon Missile Systems personnel to work closely together,” he also said. “And I want to emphasize that the ‘volunteer’ label shouldn’t downplay Mike’s role. He is a major player in all our activities, in working with students, and making connection with Raytheon and other entities in the space science community.”

“We use MDTOP to find the best trajectory to our intended destination, such as a planet, asteroid or comet,” Cupples explained.

Carl Hergenrother, an associate staff scientist on the OSIRIS-REx mission, has been collaborating with Furfaro and Cupples to work up mission scenarios for landing robots or humans on asteroids – one of NASA’s long-term goals.

“We have gone through a list of asteroids that will come close to Earth in the 2020 to 2040 era, and tried to figure out, based on their Delta-Vs, which objects are easiest to get to,” Hergenrother said.

The researchers have created profiles for missions that would send robotic landers to asteroids in the next five to ten years, using the smallest available rocket, lowest Delta-Vs and shortest flight times.

“What’s really nice about Roberto’s work is that it complements LPL’s mission planning and mission design, because we don’t have in-house facilities for doing mission profiles,” Hergenrother said.

“We have dozens of mission ideas, and we can quickly go to Roberto’s group, have them ground truth it, and hopefully have them say, ‘Hey, you really could launch at this time with this launch vehicle and with this mass,’ and tell us where our ideas are actually viable.”

Furfaro and SSEL also are part of UA’s Lunar Greenhouse Project, which is funded through LPL’s Arizona Space Grant Consortium. The greenhouse would support astronauts by growing food on site, while also providing fresh water and oxygen.

Furfaro and his students demonstrated that the greenhouse modules need to be buried underground to protect plants from cosmic rays. They also calculated how deep to bury the modules and the structural requirements to avoid collapsing under the weight of regolith above them.

The two are also working with Gene Giacomelli, also of agriculture and biosystems engineering, who is an expert in hydroponic agriculture. Together, the three serve as co-primary investigators on the project.

Extended plans, stemming from the research conducted by Furfaro and Kacira, call for creating a nearly autonomous greenhouse based on this computer model.

“The model can take real information about the temperature, amount of light, carbon dioxide, and the number of growth days and predict if we’re reaching our goal,” Giacomelli said.

“If not, it could automatically change the environment by raising the temperature or leaving the lights on longer, or whatever is required to produce the desired growth cycle,” he also said.

Giacomelli noted that Furfaro has been working on the greenhouse for several years and has been instrumental in helping the group acquire funding for another two years of development. Furfaro, who speaks fluent Italian, also has acted as the liaison between the UA group and its Italian partner, Thales Alenia Space, a large, European aerospace company.

The group also is working with Moon Express, a group of private investors and scientists who plan to send a lander to the moon in 2014.

In fact, Daniel Wibben, an SSEL master’s student, has been interning this summer at Moon Express. He and Furfaro are helping the company develop a guidance, navigation and control system that will produce the most accurate landing ever made on an extraterrestrial body – to within 10 meters or less of its intended target.

“You can see there’s a common thread to all of this,” Furfaro said. “We have different tools we can use for mission analysis, spacecraft design and GNC [guidance, navigation and control], but they’re all connected to optimizing and supporting space systems, whether they fly to asteroids or grow vegetables on the moon.”