While Hurricane Irene had officials along the East Coast preparing for mass evacuations, scientists at the Stroud Water Research Center and the University of Delaware were grabbing their best data collection tools and heading straight for the storm’s path.

It was a rare opportunity for the scientists to learn more about climate change and water quality, as Irene threatened to be the biggest hurricane to hit the Northeastern United States since 1985.

Center scientist Anthony Aufdenkampe explains, “It rains on average once per week, or 15 percent of the year, but streams and rivers move most of their annual loads on those days.

“The bigger the storm, the greater the disproportionate load, so you might have a single 100-year storm event move 25 percent of the material for an entire decade,” says Aufdenkampe.

“This is important because fresh waters and the carbon they transport play a major role in the global cycling of greenhouse gases.” 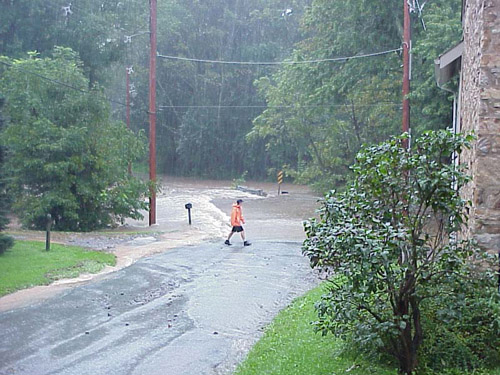 Irene could reveal much about how soil erosion into rivers might eventually bury carbon and sequester it from acting as a greenhouse gas in the atmosphere.

That’s a primary goal of the Christina River Basin Critical Zone Observatory (CRB-CZO), funded by a grant from the National Science Foundation (NSF). The Stroud Water Research Center and University of Delaware scientists are affiliated with the CRB-CZO.

The CRB-CZO is at the forefront of scientific research on integrating how human effects on the hydrologic, mineral and carbon cycles might have feedbacks to climate change.

“One of the motivations for NSF Critical Zone Observatories such as the CRB-CZO is to obtain time-continuous observations that would document and help us understand infrequent events,” says Jun Abrajano of NSF’s Earth Sciences Division.

“Some of these events are extreme enough to have major cumulative effects on the overall processes and fluxes in watershed systems. The track and magnitude of Hurricane Irene may prove it to be such an event.” 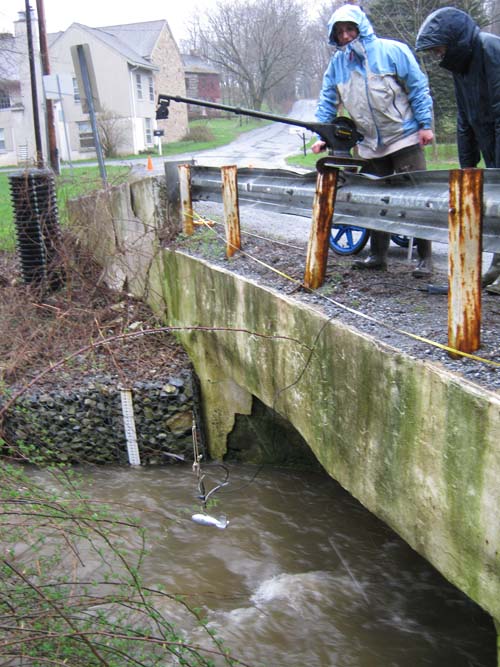 We’re hypothesizing, says Aufdenkampe, “that big storms are a major player in determining what happens to the carbon in a leaf, for example.

“Does it go back into the atmosphere or does it get buried for decades, centuries, or millennia? That’s the key to global warming and climate change.” 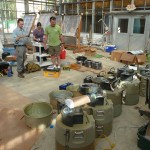 Aufdenkampe and colleagues visited sites along White Clay Creek and Brandywine Creek to set up equipment to collect floodwaters throughout the storm.

And with innovative tools developed with relatively inexpensive open-source electronic hardware, the researchers didn’t have to wait around.

Engineer Steve Hicks of the Stroud Water Research Center put together automatic water samplers that may be triggered remotely via cell phone. “By watching real-time sensor data streaming to the Internet, at precisely the right moment we fill the barrels of water we need for our analyses.”

“Had a storm like this hit five or ten years ago, we wouldn’t have been able to gather this type of data,” says Aufdenkampe.

“But now with open-source hardware and software, anything’s possible. We’re only limited by our imagination.”