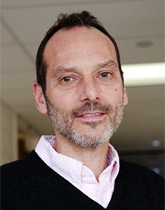 John Tanner, who also teaches chemistry in the College of Arts and Science, is studying Aspergillus fumigatus. Image credit: University of Missouri

COLUMBIA, Mo. – If finding the cure for a fungus and parasite that affects millions of people were the subject of a detective show, University of Missouri Chemistry Professor John Tanner would be the forensic expert in the lab, using high-tech equipment to make a model that could eventually solve the crime.

Tanner, who also teaches chemistry in the College of Arts and Science, has joined forces with Pablo Sobrado, an assistant professor of biochemistry at Virginia Tech, to study a unique enzyme found on two “crime scenes”: in Aspergillus fumigatus, a fungus that causes pulmonary diseases in immuno-compromised people; and in a blood-sucking insect prevalent in South America and now being found in the southwestern U.S., called the Chagas parasite, also known as the “kissing bug” for the red welts left on the victims’ faces after being bitten in his or her sleep.

“My job is to figure out what the enzyme looks like using X-ray diffraction,” Tanner said. “This enzyme makes a special sugar molecule that these organisms need to survive, so if we can find a way to stop the reaction that makes that sugar, then we might find a way to kill these pathogens.”

In Tanner’s lab at the University of Missouri, researcher Dale Karr is in the first stages of the process –growing tiny crystals of the enzyme. These crystals will eventually be used in X-ray crystallography, a technique in which diffraction patterns that are produced by bombarding crystals with intense X-ray beams are decoded to determine the atomic structure of the enzyme.  With this information, and Sobrado’s information on how the protein can be isolated and characterized, different drugs that may inhibit the enzyme can be designed and tested. 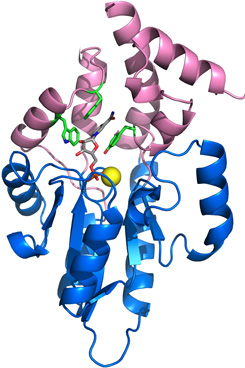 An example of the 3D models produced by Tanner's lab. Image credit: University of Missouri

“The enzyme is like a lock, and if we can see what the lock looks like, we can find a key to fit in the lock and prevent the enzyme from being active,” said Tanner. “This is interesting because it’s a new project for us, and the collaboration with Pablo has enabled my group to enter a different field with a focus on drug design. That’s exciting for me; hopefully the fruits of our labor will some day help people.”

The National Institutes of Health (NIH) has given a $1.5 million grant to support the five-year research project.