Scary Chupacabras Monster is as Much Victim as Villain

ANN ARBOR, Mich.— As Halloween approaches, tales of monsters and creepy crawlies abound. Among the most fearsome is the legendary beast known as the chupacabras.

But the real fiend is not the hairless, fanged animal purported to attack and drink the blood of livestock; it’s a tiny, eight-legged creature that turns a healthy, wild animal into a chupacabras, says University of Michigan biologist Barry OConnor. 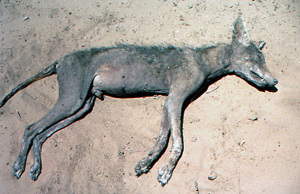 The existence of the chupacabras, also known as the goatsucker, was first surmised from livestock attacks in Puerto Rico, where dead sheep were discovered with puncture wounds, completely drained of blood. Similar reports began accumulating from other locations in Latin America and the U.S. Then came sightings of evil-looking animals, variously described as dog-like, rodent-like or reptile-like, with long snouts, large fangs, leathery or scaly greenish-gray skin and a nasty odor. Locals put two and two together and assumed the ugly varmints were responsible for the killings.

Scientists studied some of the chupacabras carcasses and concluded that the dreaded monsters actually were coyotes with extreme cases of mange — a skin condition caused by mites burrowing under the skin. OConnor, who studies the mites that cause mange, concurs and has an idea why the tiny assailants affect wild coyotes so severely, turning them into atrocities.

In a recent “Monster Talk” podcast posted on Skeptic magazine’s website, OConnor explained that the mite responsible for the extreme hair loss seen in “chupacabras syndrome” is Sarcoptes scabiei, which also causes the itchy rash known as scabies in people. Human scabies is an annoyance, but not usually a serious health or appearance problem, partly because our bodies are already virtually hairless and partly because the population of mites on a given person usually is relatively small — only 20 or 30 mites.

Evolutionary studies done by OConnor and his former graduate student Hans Klompen, now an associate professor at Ohio State University, suggest that the scabies mite has been with us throughout our evolutionary history, giving humans plenty of time to develop defenses. When humans began domesticating animals, Sarcoptes scabiei found a whole new realm of potential victims. Domestic dogs, like humans, have played host to the mites long enough to evolve the ability to fight off mange, but when the condition spreads to wild members of the dog family — foxes, wolves and coyotes — watch out.

“Whenever you have a new host-parasite association, it’s pretty nasty,” said OConnor, a professor of ecology and evolutionary biology and a curator in the U-M Museum of Zoology. “It does a lot of damage, and mortality can be relatively high because that host species has not had any evolutionary history with the parasite, so it has not been able to evolve any defenses like we have.”

In these unfortunate animals, large numbers of mites burrowing under the skin cause inflammation, which results in thickening of the skin. Blood supply to hair follicles is cut off, so the fur falls out. In especially bad cases, the animal’s weakened condition opens the door to bacteria that cause secondary skin infections, sometimes producing a foul odor. Put it all together, and you’ve got an ugly, naked, leathery, smelly monstrosity: the chupacabras.

Do mite infestations also alter the animals’ behavior, turning them into bloodthirsty killers? Not exactly, but there is an explanation for why they may be particularly likely to prey on small livestock such as sheep and goats.

“Because these animals are greatly weakened, they’re going to have a hard time hunting,” OConnor said. “So they may be forced into attacking livestock because it’s easier than running down a rabbit or a deer.”

While the chupacabras has achieved legendary status, other wild animals can suffer just as much from the effects of mange mites, OConnor said. In Australia, the mite is killing off wombats. “They presumably got the mites from dingoes, which got them from domestic dogs, which got them from us,” he said.

And a related mite, just as insidious, can drive squirrels to self-destruct. In his graduate school years at Cornell University, OConnor observed mange-weakened squirrels falling from trees. That observation led him to conduct an informal survey to see if mangy squirrels also were more likely than healthy squirrels to end up as road kill. They were, suggesting that being tortured by mites somehow made the squirrels less adept at dodging cars.