*By comparing theory with data from STAR, Berkeley Lab scientists and their colleagues map phase changes in the quark-gluon plasma*

In its infancy, when the universe was a few millionths of a second old, the elemental constituents of matter moved freely in a hot, dense soup of quarks and gluons. As the universe expanded, this quark–gluon plasma quickly cooled, and protons and neutrons and other forms of normal matter “froze out”: the quarks became bound together by the exchange of gluons, the carriers of the color force.

“The theory that describes the color force is called quantum chromodynamics, or QCD,” says Nu Xu of the U.S. Department of Energy’s Lawrence Berkeley National Laboratory (Berkeley Lab), the spokesperson for the STAR experiment at the Relativistic Heavy Ion Collider (RHIC) at DOE’s Brookhaven National Laboratory. “QCD has been extremely successful at explaining interactions of quarks and gluons at short distances, such as high-energy proton and antiproton collisions at Fermi National Accelerator Laboratory. But in bulk collections of matter – including the quark-gluon plasma – at longer distances or smaller momentum transfer, an approach called lattice gauge theory has to be used.”

Until recently, lattice QCD calculations of hot, dense, bulk matter could not be tested against experiment. Beginning in 2000, however, RHIC was able to recreate the extreme conditions of the early universe in miniature, by colliding massive gold nuclei (heavy ions) at high energies. 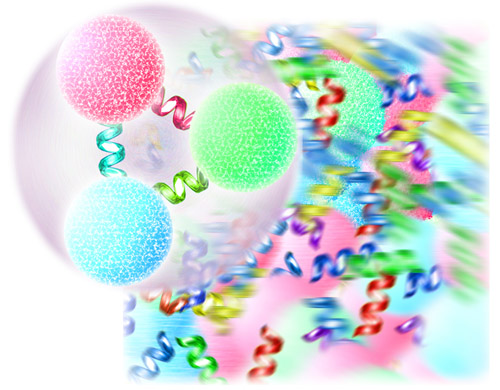 An ordinary proton or neutron (foreground) is formed of three quarks bound together by gluons, carriers of the color force. Above a critical temperature, protons and neutrons and other forms of hadronic matter “melt” into a hot, dense soup of free quarks and gluons (background), the quark-gluon plasma. Image credit: Lawrence Berkeley National Laboratory

Experimentalists at RHIC, working with theorist Sourendu Gupta of India’s Tata Institute of Fundamental Research, have recently compared lattice-theory predictions about the nature of the quark-gluon plasma with certain STAR experimental results for the first time. In so doing they have established the temperature boundary where ordinary matter and quark matter cross over and change phase. Their results appear in the journal Science.

The aim of both the theoretical and experimental work is to explore and fix key points in the phase diagram for quantum chromodynamics. Phase diagrams are maps, showing, for example, how changes in pressure and temperature determine the phases of water, whether ice, liquid, or vapor. A phase diagram of QCD would map the distribution of ordinary matter (known as hadronic matter), the quark-gluon plasma, and other possible phases of QCD such as color superconductivity.

“Plotting a QCD phase diagram requires both theory calculations and experimental effort with heavy-ion collisions,” says Xu, who is a member of Berkeley Lab’s Nuclear Science Division and an author of the Science paper. Experimental studies require powerful accelerators like RHIC on Long Island or the Large Hadron Collider at CERN in Geneva, while calculations of QCD using lattice gauge theory require the world’s biggest and fastest supercomputers. Direct comparisons can achieve more than either approach alone. 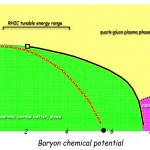 The “current conjecture” for the QCD phase diagram. The boundary between the normal (hadronic) low-temperature phase and the high-temperature quark-gluon plasma phase is marked in black. The square box on the solid line indicates the yet-to-be-found critical point where phases can co-exist; RHIC is the only heavy-ion collider whose energy can be tuned across the region where it is likely to lie. Neutrons and protons and other ordinary matter particles (including antimatter particles) are detected after they “freeze out” of fireballs caused by heavy-ion collisions like those at RHIC, indicated by the dotted line. To the right is a possible region of “color superconductivity.” Image credit: Gupta et al.

One of the basic requirements of any phase diagram is to establish its scale. A phase diagram of water might be based on the Celsius temperature scale, defined by the boiling point of water under normal pressure (i.e., at sea level). Although the boiling point changes with pressure – at higher altitudes water boils at lower temperatures – these changes are measured against a fixed value.

Through extensive calculations and actual data from the STAR experiment, the team was indeed able to establish the QCD transition temperature. Before they could do so, however, they first had to realize an equally significant result, showing that the highly dynamical systems of RHIC’s gold-gold collisions, in which the quark-gluon plasma winks in and out of existence, in fact achieve thermal equilibrium. Here’s where theory and experiment worked hand in hand.

“The fireballs that result when gold nuclei collide are all different, highly dynamic, and last an extremely short time,” says Hans Georg Ritter, head of the Relativistic Nuclear Collisions program in Berkeley Lab’s Nuclear Science Division and an author of the Science paper. Yet because differences in values of the kind observed by STAR are related to fluctuations in thermodynamic values predicted by lattice gauge theory, says Ritter, “by comparing our results to the predictions of theory, we have shown that what we measure is in fact consistent with the fireballs reaching thermal equilibrium. This is an important achievement.”

The scientists were now able to proceed with confidence in establishing the scale of the QCD phase diagram. After a careful comparison between experimental data and the results from the lattice gauge theory calculations, the scientists concluded that the transition temperature (expressed in units of energy) is 175 MeV (175 million electron volts).

Thus the team could develop a “conjectural” phase diagram that showed the boundary between the low-temperature hadronic phase of ordinary matter and the high-temperature quark-gluon phase.

In search of the critical point

Lattice QCD also predicts the existence of a “critical point.” In a QCD phase diagram the critical point marks the end of a line showing where the two phases cross over, one into the other. By changing the energy, for example, the baryon chemical potential (balance of matter and antimatter) can be adjusted.

Among the world’s heavy-ion colliders, only RHIC can tune the energy of the collisions through the region of the QCD phase diagram where the critical point is most likely to be found – from an energy of 200 billion electrons volts per pair of nucleons (protons or neutrons) down to 5 billion electron volts per nucleon pair.

Xu says, “In this paper, we compared experimental data with lattice calculations directly, something never done before. This is a real step forward and allows us to establish the scale of the QCD phase diagram. Thus begins an era of precision measurements for heavy-ion physics.”

“Scale for the phase diagram of quantum chromodynamics,” by Sourendu Gupta, Xiaofeng Luo, Bedangadas Mohanty, Hans Georg Ritter, and Nu Xu, appears in the 24 June 2011 issue of Science magazine. Gupta is with the Tata Institute of Fundamental Research in Mumbai, India, where the theoretical calculations for this paper were carried out. Mohanty is with the Variable Energy Cyclotron Centre in Kolkata, India, and was formerly a postdoctoral fellow at Berkeley Lab. Luo, Ritter, and Xu are with Berkeley Lab’s Nuclear Science Division. Luo is also with the University of Science and Technology of China in Hefei, and Xu is also with the Central China Normal University in Wuhan. This work was supported by the Indian Lattice Gauge Theory Initiative, by India’s Department of Atomic Energy-Board of Research in Nuclear Sciences, the National Science Foundation of China, the Chinese Ministry of Education, and by DOE’s Office of Science.