Rhythms in the brain that are associated with learning become stronger as the body moves faster, UCLA neurophysicists report in a new study.

The research team, led by professor Mayank Mehta, used specialized microelectrodes to monitor an electrical signal known as the gamma rhythm in the brains of mice. This signal is typically produced in a brain region called the hippocampus, which is critical for learning and memory, during periods of concentration and learning.

The researchers found that the strength of the gamma rhythm grew substantially as running speed increased, bringing scientists a step closer to understanding the brain functions essential for learning and navigation.

“The gamma rhythm is known to be controlled by attention and learning, but we find it is also governed by how fast you are running,” said Mehta, an associate professor of physics and astronomy, neurology, and neurobiology and the senior author of the study. “This research provides an interesting link between the world of learning and the world of speed.”

The study is published today in PLoS ONE, a peer-reviewed online publication of the Public Library of Science.

The ‘language of the brain’

How does the brain learn? The hippocampus is thought to rapidly and temporarily record facts and events as they are experienced, said Mehta, who also directs the Keck Center for Neurophysics at UCLA. During subsequent sleep, these temporary memories are thought to be consolidated to other brain regions for storage. If the hippocampus is damaged, it becomes very difficult to learn new things. 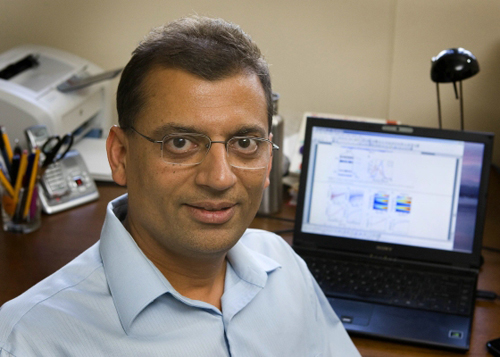 Understanding how the brain learns may one day help treat conditions such as Alzheimer’s disease, dementia, and epilepsy that specifically target the hippocampus, Mehta said.

“Deciphering the language of the brain is one of the biggest challenges that human beings face,” he said. “If we can learn to interpret these brain oscillations, it may be possible to successfully intervene in cases ranging from learning disorders to post-traumatic stress, or even to mitigate the effects of cognitive decline with aging.”

The brain contains billions of neurons, specialized cells that transmit electrical and chemical signals. Neurons in the hippocampus encode spatial position information — where one is in space — through spikes, the sharp pulses that constitute the “syllables” of their language, Mehta said.

“You can imagine the brain as a large orchestra; the gamma rhythm is a continuously playing violin, punctuated by neuronal spikes similar to the beats of a drum” said Zhiping Chen, a fourth-year UCLA physics graduate student in Mehta’s laboratory and lead author of the study.

The brain signals are a combination of multiple rhythms and neuron spikes from many different brain regions, each hinting at the language of the neurons, Mehta said. The challenge is to combine this vast amount of data to reveal the language of the brain and relate it to behavior.

“The biophysical laws that govern a single neuron are fairly well known,” Mehta said. “What is not known is how those billions of neurons interact with one another and form the mind.”

Tackling such interdisciplinary questions requires a diverse team of scientists and engineers. Members of Mehta’s group have backgrounds in physics, mathematics, engineering, neurobiology, psychology and medicine, among other disciplines.

“We hope to explore the connection between psychology and neuroscience. Studying how the individual brain cells interact can explain how consciousness arises,” said Chen.

“The hippocampus is critical for navigation,” Chen said. “Cells in the hippocampus encode position information, but to navigate, it is not enough to know where you are; you must also know how fast you are going. We concluded there must be a separate brain signal that encodes this speed information.”

The experiment was performed by measuring electrical signals from hundreds of neurons using microwires 20 times thinner than a human hair, Mehta said. Nearly a hundred gigabytes of data was collected every day, enough to fill the Library of Congress every two months.

Analysis of this vast and complex data yielded an unexpected result: The gamma rhythm, a fast signal that occurs while concentrating or learning, gradually grew stronger as the mice moved faster.

“It is rare to find a relationship that is so clear,” Chen said. “When we first saw the results, we were surprised and excited.”

Does this mean movement or exercise could influence the learning process? Mehta said it is too early to tell.

“With these new results, we are asking questions which we never imagined,” he said.

The study also verifies recent assertions that the gamma rhythm, which oscillates between 30 and 120 times every second, can be divided into slow and fast signals that originate from separate parts of the brain, Mehta said.

Additional co-authors of the study include Bert Sakmann, Nobel laureate and director of the Max Planck Florida Institute; Evgeny Resnik, a graduate student at the Max Planck Institute for Medical Research; and James McFarland, a postdoctoral researcher in the UCLA Department of Physics.

From outer to inner space

Mehta began his career as a theoretical physicist interested in probing the nature of space-time. He was challenging long accepted ideas in the field before even finishing graduate school at the Indian Institute of Science.

Grappling with the mathematical complexities of universes with more than six dimensions, Mehta became fascinated by how learning occurs and what things the brain will absorb or learn most readily.

Mehta’s previous research has shown that the hippocampal circuit rapidly evolves with learning and that brain rhythms are crucial for this process. The question now becomes: What is the relationship between activity in the hippocampus and behavior?

“It is amazing that we can understand things that are absolutely unnecessary for our survival,” Mehta said. “The brain is a very complex place, and our intuition about the mind is not enough to understand the brain. If we can first determine the rules of the brain, they will likely point in a direction that we have never imagined.”