Abhyudai Singh, assistant professor of electrical and computer engineering at the University of Delaware, describes a new method to understand sources of “noise” in gene-expression that create variability in protein levels in a paper published in Molecular Systems Biology, a publication of Nature, on Aug. 28.

This noise is expressed as variability in the levels of proteins/mRNAs in a cell.

Understanding which biochemical processes contribute to this variability is an important problem, since protein variability plays important roles such as driving genetically identical cells to different cell fates and buffering cell populations from unpredictable and hostile changes in their environment.

The paper, entitled “Dynamics of Protein Noise Can Distinguish Between Alternate Sources of Gene-Expression Variability” develops a new method that uses changes in protein levels inside single cells to pinpoint the primary source of gene-expression noise. 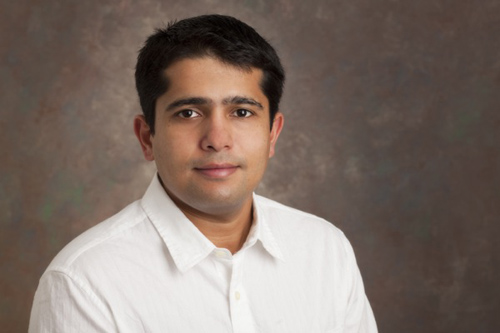 In collaboration with Prof. Leor Weinberger’s group at the Gladstone Institute of Virology and Immunology, San Francisco, Singh applied this method to the Human immunodeficiency virus (HIV) system, where gene-expression noise can drive the HIV virus into latency, a dormant drug-resistant state.

The results revealed that random bursts of mRNA production drive variability in the levels of key viral regulatory proteins during human cell infection.

“We believe that understanding the source of viral gene-expression noise will have important implications in designing therapies for preventing HIV entering latency,” Singh said.

Other co-authors on the paper include Brandon Razooky and Roy Dar from the Gladstone Institute of Virology and Immunology.

Abhyudai Singh joined the UD faculty in 2011 as an assistant professor in the Department of Electrical and Computer Engineering and the Biomedical Engineering Program. He is also an affiliated faculty member of the Center for Bioinformatics and Computational Biology (CBCB). His research interest lies in characterizing gene networks underlying disease systems, specifically pathogenic viruses such as HIV.