University of Utah researchers devised a way to watch newly forming AIDS virus particles emerging or “budding” from infected human cells without interfering with the process. The method shows a protein named ALIX gets involved during the final stages of virus replication, not earlier, as was believed previously.

“We watch one cell at a time” and use a digital camera and special microscope to make movies and photos of the budding process, says virologist Saveez Saffarian, an assistant professor of physics and astronomy and senior author of a new study of HIV budding published online on May 16, 2014, in the Public Library of Science journal PLOS ONE.

“We saw ALIX recruited into HIV budding for the first time,” he says. “Everybody knew ALIX is involved in HIV budding, but nobody could visualize the recruitment of ALIX into the process.”

The finding is “fundamental basic science” and has no immediate clinical significance for AIDS patients because ALIX is involved in too many critical functions like cell division to be a likely target for new medications, Saffarian says. 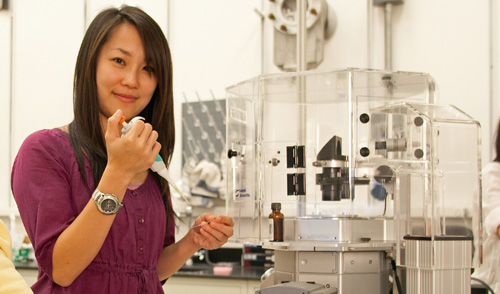 University of Utah physics doctoral student Pei-I Ku prepares a sample for the digital microscope she uses to make movies and photographs of the AIDS-causing human immunodeficiency virus budding from human cells in the laboratory. The microscope is in a glass chamber to keep the cells at body temperature so researchers can watch the process over time. Ku is the first author of a new study in which University of Utah researchers combined imaging technology and biochemistry to make such images. The method revealed that a protein named ALIX gets involved in the process later than believed previously. Photo Credit: Tom Bear (https://tombearphotography.com) for the University of Utah

“We know a lot about the proteins that help HIV get out of the cell, but we do not know how they come together to help the virus get out, and it will be in the next 10 to 20 years that we will know a lot more of about this mechanism,” he adds. “Would this be a drug target? Would this be a part of biochemistry used in a therapeutic or biotech industry later on? I can’t tell you now. But if it was not because of our curiosity as a species, we would not have the technology we have today.”

The new study “is nice work,” says HIV budding expert Wes Sundquist, who advised Saffarian and is professor and co-chair of biochemistry at the University of Utah School of Medicine. “It’s of genuine interest for those of us who study the mechanism of HIV assembly.”

Biochemical methods used for years involve collecting millions of viruses in lab glassware and doing different analyses to reveal the proteins that make up the virus – for example, by using antibodies that bind to certain proteins and using other proteins that make the first proteins fluoresce so they can be seen.

“You’re not doing it one virus at a time,” Saffarian says. “The problem with that is you don’t see the differences among similar viruses. And you do not see the timing of how various proteins come and go to help the virus get out of the cell.”

Other methods freeze or otherwise fix cells as new HIV particles emerge from them, and use an electron microscope to photograph those freeze-frame views of viral replication. Saffarian also uses technology known as “total internal reflection fluorescence microscopy,” which has been used to look at dynamic processes in cells.

The top row shows, left to right, red-labeled protein molecules named Gag (shown here in black and white) assembling to form a new HIV particle that buds from a human cell grown in the laboratory. The bottom row shows the same process but with proteins named ALIX labeled green (also in black and white). Together, the two sequences (minutes and seconds shown at top) show how ALIX gets involved late in the process as Gag assembles to form a new particle of HIV, which causes AIDS. That finding of a new University of Utah study contradicts earlier research that had suggested ALIX gets involved at an earlier stage in the HIV budding process. Photo Credit: Pei-I Ku, University of Utah

The method was used before to make images of the budding of HIV and a similar horse virus, EIAV. But Saffarian says that study didn’t show ALIX getting involved in HIV budding, and had flaws that wrongly indicated the ALIX protein got involved quite early in the EIAV budding process, suggesting it did the same in HIV budding.

Ku, Saffarian and colleagues combined that microscopy method with an improved way of genetically linking a green fluorescent “label” to ALIX proteins in cloned cells so they can see the proteins without harming their normal function. The researchers tried numerous so-called “linkers” and found the one that let them see the ALIX proteins as they got involved in HIV budding but without disturbing the process.

Neither the microscope technology nor labeling proteins with green fluorescence are new, but “what we did that is new is we linked these fluorescence proteins to ALIX using many different kinds of linkers” to find one that let the ALIX protein function properly, he adds.

The problem with earlier research – which indicated ALIX was involved early in the budding process – was that only one linker was used, and it impaired ALIX’ normal function, Saffarian says. 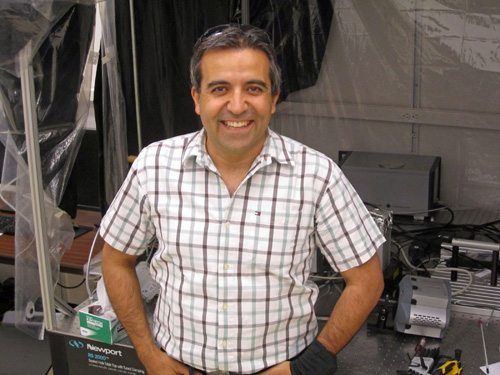 Virologist Saveez Saffarian, an assistant professor of physics and astronomy at the University of Utah, combined imaging technology and biochemistry so he could watch new HIV particles emerge or “bud” from human cells grown in the lab. In a new study in the journal PLOS ONE Saffarian and his colleagues showed that a protein named ALIX gets involved in the budding process later than once believed. Photo Credit: Lee J. Siegel, University of Utah

When HIV replicates inside a human cell, a protein named Gag makes up most of the new particles – there are 4,000 copies of the Gag protein in one HIV particle – although a bunch of other proteins get involved in the process, including ALIX, which stands for “alg-2 interacting protein x.” Experiments like those by Saffarian’s team use “virus-like particles,” which are HIV particles stripped of their genetic blueprint or genome so they don’t pose an infection risk in the lab.

During budding, Gag proteins assemble on the inside of a cell membrane – along with ALIX in the late stages – and form a new HIV particle that pushes its way out of the cell – the process by which AIDS in an infected person spreads from cell to cell.

To look at the budding process, Ku, Saffarian and colleagues place human HELA cells containing the particles in a small amount of liquid growth medium in a petri dish and put it under the microscope, which is in a glass chamber kept at body temperature so the cells can remain alive for more than 48 hours. A solid-state blue laser is aimed at the sample to make the green-labeled ALIX and red-labeled Gag proteins glow or fluoresce so they can be seen as they assemble into a virus particle.

With red-labeled Gag proteins and green-labeled ALIX proteins, “we could see ALIX come at the end of the assembly of the virus particle,” with some 100 ALIX proteins converging with the roughly 4,000 Gag molecules and assembling into a new HIV particle. ALIX then brings in two other proteins, which cut the budding virus particle off from the cell when it emerges. ALIX’ position during the pinching off of new particles hadn’t been recognized before, Saffarian says

The researchers watched the virus particles bud from one cell at a time: usually about 100 of them emerged during a two-hour period. Saffarian says most of the ALIX proteins left when HIV assembly was complete and returned to the liquid inside a cell.

He says the discovery that ALIX doesn’t get involved until the late stages of HIV budding suggests the existence of a previously unrecognized mechanism in the virus that regulates the timing of ALIX and other proteins in assembling new HIV particles.

“We discovered that the cellular components that help with the release of the virus actually arrive in a much more complex timing scheme than predicted based on the biochemical data,” Saffarian says. “The outcome of this study is promising because it uncovers a new regulatory mechanism for recruitment of cellular components to the HIV budding sites and opens the door to exciting future studies on the mechanism of HIV budding.”

Why are physicists studying viruses? First, biophysicists study physical mechanisms in biology, such as motors in cells. Saffarian earned a doctorate in biophysics, developing methods that used fluorescent light to look at cellular processes.

“I got very jealous because I felt every time I contributed to a project, the actual science was somebody else’s pursuit,” he says. “I was helping them with tools, but not asking fundamental questions myself.”

So Saffarian did a postdoctoral fellowship in cell biology at Harvard Medical School, then “decided I wanted to study viruses, how they get out of cells and replicate.” In addition to his position in physics, he is an adjunct assistant professor of biology.

A 10-second video showing HIV budding with ALIX is at:  https://youtu.be/wFSs1eumnXA

Final stages of HIV assembly: This 10-second movie shows the role of a protein named ALIX (labeled green with a fluorescent protein) as it is gets involved in the formation or “budding” of two new human immunodeficiency virus (HIV) particles out of a human cell. The new HIV particles are made mostly of a protein named Gag. The movie shows two places (red) where Gag is assembling to form HIV particles. It shows that green-labeled ALIX proteins get involved late in the process when they bind in a blaze of green color to newly forming virus particles (expanding red spots). That is the key finding of a new University of Utah study led by virologist Saveez Saffarian and physics doctoral student Pei-I Ku. Credit: Pei-I Ku, University of Utah.