The temperatures of North Atlantic Ocean water flowing north into the Arctic Ocean adjacent to Greenland — the warmest water in at least 2,000 years — are likely related to the amplification of global warming in the Arctic, says a new international study involving the University of Colorado at Boulder.

Led by Robert Spielhagen of the Academy of Sciences, Humanities and Literature in Mainz, Germany, the study showed that water from the Fram Strait that runs between Greenland and Svalbard — an archipelago constituting the northernmost part of Norway — has warmed roughly 3.5 degrees Fahrenheit in the past century. The Fram Strait water temperatures today are about 2.5 degrees F warmer than during the Medieval Warm Period, which heated the North Atlantic from roughly 900 to 1300 and affected the climate in Northern Europe and northern North America.

The team believes that the rapid warming of the Arctic and recent decrease in Arctic sea ice extent are tied to the enhanced heat transfer from the North Atlantic Ocean, said Spielhagen. According to CU-Boulder’s National Snow and Ice Data Center, the total loss of Arctic sea ice extent from 1979 to 2009 was an area larger than the state of Alaska, and some scientists there believe the Arctic will become ice-free during the summers within the next several decades.

“Such a warming of the Atlantic water in the Fram Strait is significantly different from all climate variations in the last 2,000 years,” said Spielhagen, also of the Leibniz Institute of Marine Sciences in Keil, Germany. 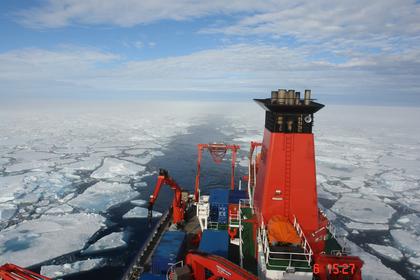 Photo of the German research vessel Maria S. Merian moving through sea ice in Fram Strait northwest of Svalbard. The research team discovered the water there was the warmest in at least 2,000 years, which has implications for a warming and melting Arctic. Image credit: Nicolas van Nieuwenhove (IFM-GEOMAR, Kiel)

According to study co-author Thomas Marchitto, a fellow at CU-Boulder’s Institute of Arctic and Alpine Research, the new observations are crucial for putting the current warming trend of the North Atlantic in the proper context.

“We know that the Arctic is the most sensitive region on the Earth when it comes to warming, but there has been some question about how unusual the current Arctic warming is compared to the natural variability of the last thousand years,” said Marchitto, also an associate professor in CU-Boulder’s geological sciences department. “We found that modern Fram Strait water temperatures are well outside the natural bounds.”

A paper on the study is published in the Jan. 28 issue of Science. The study was supported by the German Research Foundation; the Academy of Sciences, Humanities and Literature in Mainz, Germany; and the Norwegian Research Council.

Other study co-authors included Kirstin Werner and Evguenia Kandiano of the Leibniz Institute of Marine Sciences, Steffen Sorensen, Katarzyna Zamelczyk, Katrine Husum and Morten Hald from the University of Tromso in Norway and Gereon Budeus of the Alfred Wegener Institute of Polar and Marine Research in Bremerhaven, Germany.

Since continuous meteorological and oceanographic data for the Fram Strait reach back only 150 years, the team drilled ocean sediment cores dating back 2,000 years to determine past water temperatures. The researchers used microscopic, shelled protozoan organisms called foraminifera — which prefer specific water temperatures at depths of roughly 150 to 650 feet — as tiny thermometers.

In addition, the team used a second, independent method that involved analyzing the chemical composition of the foraminifera shells to reconstruct past water temperatures in the Fram Strait, said Marchitto.

“Cold seawater is critical for the formation of sea ice, which helps to cool the planet by reflecting sunlight back to space,” said Marchitto. “Sea ice also allows Arctic air temperatures to be very cold by forming an insulating blanket over the ocean. Warmer waters could lead to major sea ice loss and drastic changes for the Arctic.”

The rate of Arctic sea ice decline appears to be accelerating due to positive feedbacks between the ice, the Arctic Ocean and the atmosphere, Marchitto said. As Arctic temperatures rise, summer ice cover declines, more solar heat is absorbed by the ocean and additional ice melts. Warmer water may delay freezing in the fall, leading to thinner ice cover in winter and spring, making the sea ice more vulnerable to melting during the next summer.

Air temperatures in Greenland have risen roughly 7 degrees F in the past several decades, thought to be due primarily to an increase in Earth’s greenhouse gases, according to CU-Boulder scientists.

“We must assume that the accelerated decrease of the Arctic sea ice cover and the warming of the ocean and atmosphere of the Arctic measured in recent decades are in part related to an increased heat transfer from the Atlantic,” said Spielhagen.