Researchers at UCLA’s Jules Stein Eye Institute and colleagues who successfully transplanted specialized retinal cells derived from human embryonic stem cells into the eyes of two legally blind patients report that the transplants appear safe and that both patients have experienced modest improvement in their vision.

The preliminary findings, published online Jan. 23 in the journal The Lancet, represent a milestone in the therapeutic use of stem cells and may pave the way for a new therapy to treat eye diseases, the researchers said. Because this is the first time physicians have applied the power of regenerative medicine to eye disease, the clinical trials are being watched closely by scientists, stem-cell therapy advocates and the public.

The patients — a woman in her 50s with Stargardt’s macular dystrophy and a woman in her 70s with dry age-related macular degeneration — underwent outpatient transplantation surgeries last July, said principal investigator Dr. Steven Schwartz, chief of the retinal division at the Jules Stein Institute and the Ahmanson Professor of Ophthalmology at the David Geffen School of Medicine at UCLA.

Both patients received relatively low doses of stem cell–derived retinal pigment epithelial (RPE) cells, which were transplanted into the space under the retina. The patients then received low-dose immunosuppression therapy over a number of weeks. The researchers monitored the patients’ progress over four months and found no safety concerns, no signs of rejection and no abnormal cell growth. 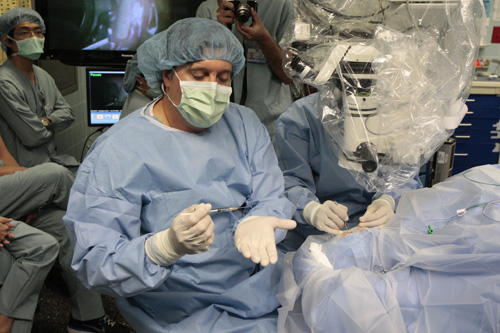 Stem cell trials. UCLA's Dr. Steven Schwartz holds a syringe with cells that were prepared in the lab of the biotechnology company that developed the therapy, Advanced Cell Technology. (Photo credit: Reed Hutchinson/UCLA)

In the Lancet, Schwartz and a team of doctors from UCLA and Advanced Cell Technology Inc., which manufactured the stem cells used in the surgery, report that standard vision tests suggested some improvement in the vision of both patients. The woman with Stargardt’s disease, for example, went from only being able to discern hand movements to seeing a single finger move, according to the Lancet article. On a visual acuity letter-chart, she went from being unable to read any letters prior to treatment to reading five letters.

The patient with macular degeneration also showed some improvement after the therapy. Where once she was only able to make out 21 letters on the chart, her reading level stabilized at 28 letters — after peaking at 33 letters just a couple of weeks after the transplantation. 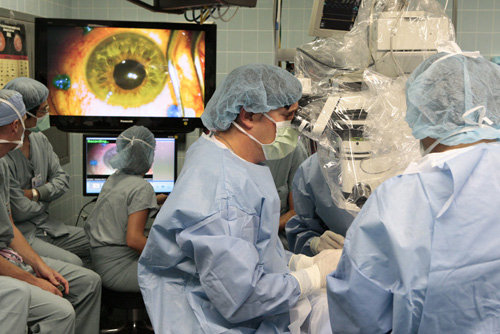 “The ultimate therapeutic goal will be to treat patients earlier in the disease processes, potentially increasing the likelihood of photoreceptor and central visual rescue,” the authors of the paper wrote.

The patients are part of two separate clinical trials, each of which will eventually include 12 patients, Schwartz said. The trials will aim to determine the safety of this particular use of stem cell therapy, as well as the patients’ ability to tolerate the treatment.

No standard treatments exist for either of these eye diseases. The dry form of macular degeneration, the most common form of the disease and the leading cause of blindness in the developed world, affects as many as 30 million people in the United States and Europe, especially those over age 55; the number of people affected is expected to double over the next 20 years as the population ages. Stargardt’s disease causes progressive vision loss, usually starting when patients are between 10 to 20 years old.

In both conditions, the layer of retinal pigment epithelial cells located beneath the retina deteriorates and atrophies. These cells support, protect and provide nutrition for light-sensitive photoreceptors in the eye. Over time, the death of these cells and the eventual loss of the photoreceptors can lead to blindness as central vision is gradually destroyed.

The preliminary report in Lancet is accomapnied by a commentary on the findings.