College students playing Japanese fighting video games often object to the unrealistic depictions of the characters, drawn with exaggerated and highly sexualized physiques, but they say the mechanics of the game itself are more important to them.

Those findings come from researcher Rachael Hutchinson, associate professor of Japanese studies in the University of Delaware’s Department of Languages, Literatures and Cultures, who conducted four years of surveys of students’ attitudes toward the games.

Her paper, “Gender Stereotypes in Japanese Fighting Games: Effects on Identification and Immersion,” was published in the September issue of the Journal of New Media and Culture.

“In these particular games, the characters — male and female — have very extreme, exaggerated physiques,” Hutchinson said. “These are very unrealistic body types. 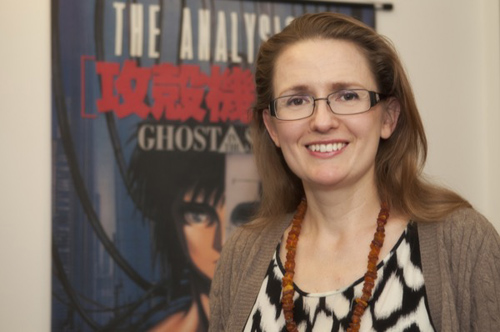 “My question was: Does this detract from a player’s ability to identify with a character [he or she is controlling during the game] or from their immersion in the game?”

She found that players noticed and had negative feelings about the exaggerated body types and that there were differences between the reactions of men and women, although both genders expressed worry about the influence on younger players.

Men, she said, were more concerned about the extreme body images of the male characters, drawn with such exaggerated muscles that even a student who was a bodybuilder called them unrealistic. In contrast, women were more likely to criticize the sexualized depiction of the female characters as an indication that men dominate the video game industry as designers and corporate executives.

Despite these objections to the images of characters, students told Hutchinson that other factors were much more important to their identification with characters and their immersion in a particular game.

“When I asked them what detracts from their identification with a character, the sexualized elements were ranked at No. 6,” she said. Much more important to the players were such factors as whether they were winning the game and whether they could easily direct a character’s actions.

“When you’re losing or feel like you can’t control your character, you get frustrated and lose that sense of identification,” Hutchinson said. “When you’re winning, you identify with the character no matter what it looks like. These are functions of the genre, not related to how the character appears.”

The research also shows the value in studying a particular type of game, rather than the industry as a whole, she said. Japanese fighting games give players a choice of dozens of characters and the ability to engage in short fighting sequences that last only a few minutes. After a fight, a player can change characters if she or he wants to.

In a different kind of game, where a player directs a single character through a narrative that might take hours to complete, the findings might be different, Hutchinson said.

“I think a lot has to do with choice, with whether a game gives you a choice of characters,” she said. “These fighting games are different from other genres, and the way people play them is different.”

A new, interdisciplinary minor in game studies is available this semester, largely because of the interest expressed by students, said Hutchinson, who is a co-founder of the UD Game Studies Research Group. That group was established with support from the College of Arts and Sciences’ Interdisciplinary Humanities Research Center.

A survey of undergraduates found that many students — with majors including computer science, art, communication, and languages, literatures and cultures — were interested in a game studies minor, Hutchinson said. Faculty from a variety of disciplines worked together to create the program and develop related courses.

The minor requires 18 credits in such subjects as game design, game reception and games and culture, and Hutchinson said it’s already proving to be popular with students.

“Most students have been playing these games for a long time,” she said. “Now, we can help them learn to think about them in a different way.”