Vegetable Oil Is Good for You, MU Researcher Says

COLUMBIA, Mo. — A typical American consumes approximately 3 or more tablespoons of vegetable oil each day. Vegetable oils, like those from soy, corn and canola, are a significant source of calories and are rich in linoleic acid (LA), which is an essential nutrient. Since the 1970s, researchers have known that LA helps reduce blood cholesterol levels, and for decades, scientists have known that consuming LA can help lower the risk of heart disease. However, some experts have been claiming recently that Americans might be getting too much of a good thing. A new study from the University of Missouri contradicts that claim.

In the study, “Effect of Dietary Linoleic Acid on Markers of Inflammation in Healthy Persons: A Systematic Review of Randomized Controlled Trials,” researchers at the University of Missouri and the University of Illinois found that no link exists between vegetable oil consumption and circulating indicators of inflammation that are often associated with diseases such as heart disease, cancer, asthma and arthritis. While earlier animal studies have shown that a diet rich in LA can promote inflammation, MU animal sciences researcher Kevin Fritsche says that humans respond to LA differently.

“In the field of nutrition and health, animals aren’t people,” said Fritsche, an MU professor of animal science and nutrition in the Division of Animal Sciences. “We’re not saying that you should just go out and consume vegetable oil freely. However, our evidence does suggest that you can achieve a heart-healthy diet by using soybean, canola, corn and sunflower oils instead of animal-based fats when cooking.” 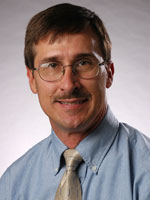 Kevin Fritsche. Fritsche found that individuals can achieve a heart-healthy diet by using soybean, canola, corn and sunflower oils instead of animal-based fats when cooking. Image credit: University of Missouri

Fritsche, along with Guy Johnson, an adjunct professor of food and human nutrition at the University of Illinois, conducted one of the most thorough studies on LA questioning whether this fatty acid promotes inflammation in humans. When the evidence from numerous clinical trials was gathered and examined, Fritsche said it was clear that LA consumption did not promote inflammation in healthy people.

Fritsche and Johnson reviewed 15 clinical trials that studied nearly 500 adults as they consumed various forms of fats, including vegetable oils. The researchers could find no evidence that a diet high in linoleic acid had any links to inflammation in the body. Due to this discovery, the researchers say that it is important to continue following the current recommendations from the Institute of Medicine and the American Heart Association to use vegetable oil when cooking and consume between two and four tablespoons of vegetable oil daily to reach the necessary amount of linoleic acid needed for a heart-healthy diet.

“Consumers are regularly bombarded with warnings about what foods they should avoid,” Fritsche said. “While limiting the overall fat intake is also part of the current nutrition recommendations, we hope people will feel comfortable cooking with vegetable oils.”

The study, “Effect of Dietary Linoleic Acid on Markers of Inflammation in Healthy Persons: A Systematic Review of Randomized Controlled Trials,” was published in the Journal of the Academy of Nutrition and Dietetics. The Division of Animal Sciences is housed within the College of Agriculture, Food and Natural Resources at MU.