Crystal Valdez selected to meet with 34 laureates at international conference

From the time she was a young girl, Crystal Valdez was fascinated by science. “When I first learned we are composed of cells and that cells are composed of molecules and atoms, I was amazed and wanted to understand how it all works,” the chemistry graduate student recalled.

That curiosity ultimately led her to the laboratory of Anastassia Alexandrova at UCLA, where Valdez has earned a reputation for her research on the design and function of enzymes.

“Crystal’s success is well-deserved,” said Alexandrova, an assistant professor in the department of chemistry and biochemistry and a member of UCLA’s California NanoSystems Institute. “Our researchers view Crystal as the No. 1 biochemistry expert in our lab.”

Now Valdez’s hard work and expertise have earned her further recognition. The Southern California native is among just 73 Americans — and 625 of the world’s premier chemistry students from 78 countries overall — selected to attend a prestigious weeklong meeting of 34 Nobel laureates in the medieval city of Lindau, Germany. 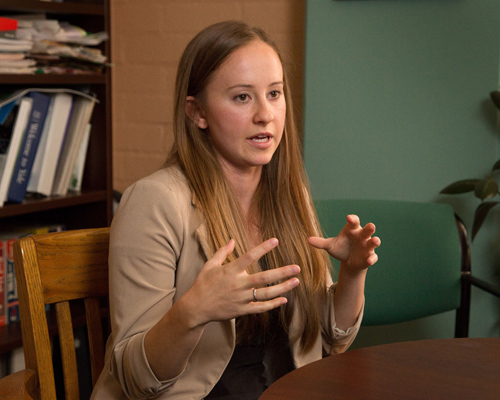 The students, who were considered for their distinguished research and chosen for the honor following a rigorous, intensive screening process, will attend lectures, panel discussions seminars and social events with the laureates from June 30 to July 5.

“I’m excited to meet great scientists from all around the world, and honesty, I’m somewhat intimidated as well,” Valdez said. “I love learning how people came into science, because everyone has such a different story and we all end up in the same place. I want to hear their advice on where they see science going.”

Valdez is doing what she can to push science forward in Alexandrova’s lab, where the research program focuses on the design and description of new materials — particularly artificial enzymes — starting with the electronic structure and building up to the molecular and nano levels.

Alexandrova praised Valdez’s perseverance and determination to succeed, as well as her cheerful personality. “What makes Crystal unique is her will to win, no matter what,” she said. “No matter what I give her, she jumps on it and tears it apart. She keeps plowing. That attitude is 90 percent of success. The rest is talent.”

“Sometimes I get stuck,” said Valdez. “But I try to approach a problem from all different angles and talk with colleagues to find new pathways and reorganize my thoughts. I love research. That’s what I want to do.” 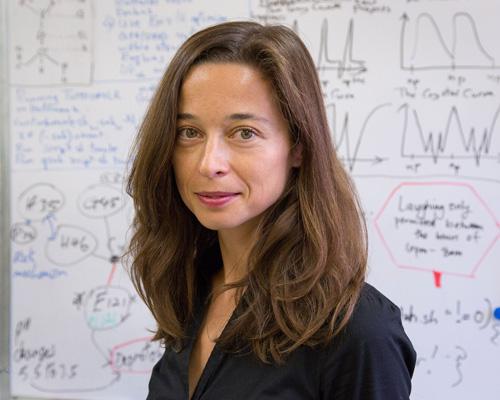 Valdez’s own research focuses on enzymes, complex proteins that catalyze chemical reactions — particularly those which, because they contain a metal atom, are extremely efficient and powerful catalysts. Using computational tools, she and her laboratory colleagues work to design new artificial enzymes or to improve natural ones for catalysis.

“How nature designs clever catalysts fascinates me,” said Valdez, whose research is federally funded by the National Science Foundation through a three-year predoctoral fellowship. “While nature creates enzymes, sometimes it does not create them to be the most catalytically efficient — but Anastassia does.

“My goal in Anastassia’s lab is to design an artificial enzyme that contains non-physiological metals such as palladium or iridium,” she added. “These non-physiological metals are extremely catalytically active and catalyze important reactions found in the production of pharmaceuticals. My hope is that one step in the production of a drug involving highly toxic reagents and dangerous conditions could be replaced by an enzyme that operates at room temperature in a test tube.”

If the chemists are able to replace a synthetic step in the production process with an artificial enzyme, that research could potentially save a pharmaceutical company millions of dollars.

“We don’t alter the final product, but we alter the way it’s obtained,” Alexandrova said. “It becomes greener, cleaner, cheaper and more efficient.”

The chemists in Alexandrova’s lab are interested in both pure chemistry — how, for example, an enzyme that contains a metal atom catalyzes a chemical reaction at the atomic level — and applied chemistry. “We are interested in the choices that nature makes for certain metals to play a catalytic role in different enzymes,” Alexandrova said.

Outside the lab, Valdez, who grew up in the Antelope Valley and has family in East Los Angeles, is active in outreach to other minority students as a member of UCLA’s Organization for Cultural Diversity in Chemistry, a group founded by Miguel Garcia-Garibay, professor and chair of UCLA’s department of chemistry and biochemistry, who serves as the group’s faculty adviser.

Valdez and other graduate students in the organization work with middle school teachers to help them get their students excited about chemistry and to create a close-knit community among graduate students and faculty at UCLA, promoting cultural diversity in the sciences.

Valdez, who is finishing her third year of graduate work at UCLA, said that when she came to UCLA, she quickly felt at home on the Westwood campus.

“It’s been great getting an interdisciplinary science education here,” she said. “The faculty are very receptive and welcoming and not at all intimidating to approach. At other universities I considered, I had a very different experience. Anastassia has been so supportive and encouraging. There are so many opportunities here and the sciences are all connected at UCLA.”

Valdez said she enjoys the hard work of chemistry research and is looking forward to learning more during her week in Germany with some of the luminaries of modern science. But she also makes sure to let her hair down once a week and enjoy time for salsa dancing at UCLA.

“It’s super fun,” she said. “The dancing and chemistry both are.”