New research from North Carolina State University and the University of Colorado shows that households with dogs are home to more types of bacteria – including bacteria that are rarely found in households that do not have dogs. The finding is part of a larger study to improve our understanding of the microscopic life forms that live in our homes.

“We wanted to know what variables influence the microbial ecosystems in our homes, and the biggest difference we’ve found so far is whether you own a dog,” says Dr. Rob Dunn, an associate professor of biology at NC State and co-author of a paper describing the work. “We can tell whether you own a dog based on the bacteria we find on your television screen or pillow case. For example, there are bacteria normally found in soil that are 700 times more common in dog-owning households than in those without dogs.”

And these microbial differences may be important. For example, it’s known that women who have a dog in the home when pregnant are less likely to have children with allergies. This is a correlation – there’s no known causal link between the presence of a dog and the absence of allergies – but it has been hypothesized that the difference is related to the women’s exposure to a wider variety of microbes. However, to this point there were few data on what the differences in microbial populations might be. While this study doesn’t demonstrate a causal link, it sheds more light on the subject, showing that dogs have a major influence on which microbes are found in our homes. 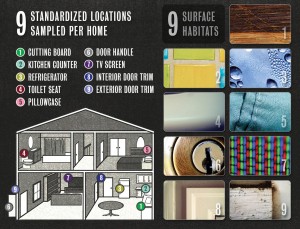 Citizen scientists in 40 homes sampled nine common surfaces to help researchers determine what kinds of bacteria lived there, and in what relative numbers. The nine surfaces were wiped with sterile swabs from which researchers collected DNA to see which organisms were present. The nine surfaces were the television screen, kitchen counter, refrigerator, toilet seat, cutting board, pillow case, exterior door handle, the trim around an interior door and the trim around an exterior door.

The study found 7,726 phylotypes, or kinds, of bacteria in the homes. The study also found that each of the locations sampled harbored its own unique collection of bacteria. Researchers were able to group the sampled surfaces in the homes into one of three general habitats: places we touch, places our food touches and places that collect dust. For example, the types of bacteria found in refrigerators, on kitchen counters and on cutting boards tended to be similar – because they were primarily linked to our food. Meanwhile, the bacteria found on doorknobs, pillow cases and toilet seats were also fairly similar – and came from humans.

“We leave a microbial ‘fingerprint’ on everything we touch,” Dunn says. “Sometimes those microbes come from our skin, sometimes they’re oral bacteria and – as often as not – they’re human fecal bacteria.”

“This makes sense,” Dunn says. “Humans have been living in houses for thousands of years, which is sufficient time for organisms to adapt to living in particular parts of houses. We know, for example, that there is a species that only lives in hot-water heaters. We deposit these bacterial hitchhikers in different ways in different places, and they thrive or fail depending on their adaptations.”

The paper, “Home Life: Factors structuring the bacterial diversity found within and between homes,” was published in PLOS ONE May 22. The paper was co-authored by Dunn; Dr. Holly Menninger, director of public science for the Your Wild Life program at NC State; and Dr. Noah Fierer, Jessica Henley and Jonathan Leff of the University of Colorado. The research was supported by the Sloan Foundation and the Howard Hughes Medical Institute. The dataset used for the paper is also publicly available at figshare: https://dx.doi.org/10.6084/m9.figshare.674588.