UTM Study Raises Questions About When and Where Soybeans Were Domesticated

If you like tofu, tempeh, edamame or miso soup, you’re a fan of soybeans. But the significance of this legume goes far beyond a few culinary treats — soybeans rank seventh among world crops for tonnage harvested.

Now, a new study led by researchers at the University of Toronto Mississauga and the University of Oregon gets at the root of soybean domestication in Asia, and challenges many of the long-held beliefs about when and where humans first began to domesticate this plant — and specifically, increase its seed size.

“Soybeans appeared to be linked to humans almost as soon as villages were established in northern China,” said Professor Gary Crawford of the Department of Anthropology. “Soybean seems to be a plant that does well in human impacted habitats. In turn, humans began to learn how tasty soybean was and how useful it was.” 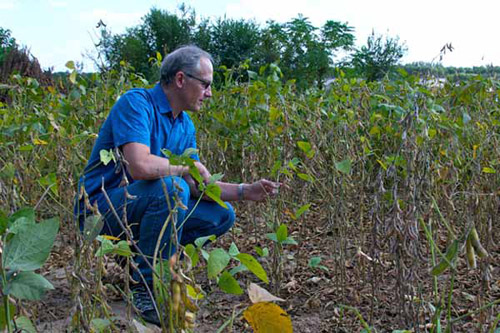 While previous estimates had put the domestication of soybean specifically in northern China between3,000 and 5,000 years ago, no proof actually existed. In a paper published in the Nov. 4, 2011 issue of PLoS ONE, Oregon’s Gyoung-Ah Lee, Crawford and their colleagues report that soybean was probably domesticated at least three separate times.

Soybean’s early use dates from 8,600 to 9,000 years ago in northern China. It’s still a mystery whether it was a crop at that time because the seeds are similar to wild ones. Selection for large seeds, evidencing artificial selection by people, took another 5000 to 4000 years.

In Japan, evidence of domesticated soybeans dates from 5,000 years ago, says Crawford, and these soybean seed specimens are the largest seed specimens found in East Asia at the time.

Soybean samples similarly reveal evidence of selection for larger size soybeans at 3,000-year-old sites in Korea. This indicates that soybean was being domesticated in Korea too. “It means that people were recognizing the characteristics of plants and…recognizing that plants are malleable. These people were the first biotechnologists; they were keen observers.”  For example, wild soybean plants have small seeds and tend to grow as vines, whereas domesticated soybeans were selected to put more energy into growing larger and more seeds (instead of stems and leaves).

“What we did not expect to see was the early record for soybean in Korea, as well as Japan,” said Crawford. “Both of those areas did not launch into agriculture the way China did, or as early. But it looks like wild soybean gravitated to these [villages] as they did in China, and people found them to be an attractive resource.”

Today, soybean is the world’s foremost oilseed source and the major source of protein for domesticated chickens and pigs. But Crawford believes the study does more than shed light on a simple seed.

“Domestication and agriculture marks the passage into a more modern, but pre-industrial human relationship with the environment,” said Crawford. “Agriculture was and is fundamental to who we are as a people. It marks the transition out of the relatively simple hunting-gathering way of life into who we are today.”