The Utica Shale lies beneath the Marcellus Shale, and both are part of the Appalachian Basin, which is the longest-producing petroleum province in the United States. The Marcellus Shale, at 84 TCF of natural gas, is the largest unconventional gas basin USGS has assessed. This is followed closely by the Greater Green River Basin in southwestern Wyoming, which has 84 TCF of undiscovered natural gas, of which 82 TCF is continuous (tight gas).

“Understanding our domestic oil and gas resource potential is important, which is why we assess emerging plays like the Utica, as well as areas that have been in production for some time” said Brenda Pierce, USGS Energy Resources Program Coordinator. “Publicly available information about undiscovered oil and gas resources can aid policy makers and resource managers, and inform the debate about resource development.” 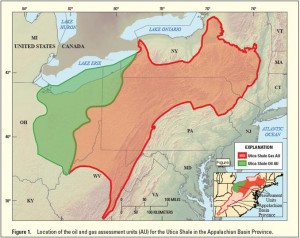 The Utica Shale is a formation in the Appalachian Basin that lies beneath the Marcellus Shale. It was recently assessed for the first time by the USGS, and is estimated to contain 38 TCF of natural gas, 940 MMB of oil, and 9 MMB of natural gas liquids. Image credit: U.S. Geological Survey

Some shale rock formations, like the Utica and Marcellus, can be source rocks – those formations from which hydrocarbons, such as oil and gas, originate. Conventional oil and gas resources gradually migrate away from the source rock into other formations and traps, whereas continuous resources, such as shale oil and shale gas, remain trapped within the original source rock.

These new estimates are for technically recoverable oil and gas resources, which are those quantities of oil and gas producible using currently available technology and industry practices, regardless of economic or accessibility considerations.

USGS is the only provider of publicly available estimates of undiscovered technically recoverable oil and gas resources of onshore lands and offshore state waters. The USGS Utica Shale assessment was undertaken as part of a nationwide project assessing domestic petroleum basins using standardized methodology and protocol.

The new assessment of the Utica Shale may be found online. To find out more about USGS energy assessments and other energy research, please visit the USGS Energy Resources Program website, sign up for our Newsletter, and follow us on Twitter.