Fluid Cathedrals: Gels Under the Microscope

ANN ARBOR— A dollop of hair gel might not look like much, but Michigan Engineering researchers have found that it’s a labyrinth of chambers and domes, constructed by the particles inside. These structures allow the gel to hold its shape and determine how much pressure it can withstand before it starts to flow.

While manufacturers currently use trial and error to develop gels with a particular degree of solidity, this discovery could provide a way to design gels for particular applications.

Hair products and shoe inserts are rather pedestrian, but modern gels do much more. For example, they can help cameras compensate for shaky movements, and they’re used in high-tech bandages that can selectively wick moisture away from a wound or keep it from drying out. Yet even as researchers developed these specialized gels, they hadn’t understood the ground rules for how particles in a gel make the gel more solid, especially when pressure is applied.

“They have an unusual combination of solid- and liquid-like properties, as if they had tiny springs embedded within them, so gels hold their shapes well but can flow when pressure is applied,” she said. 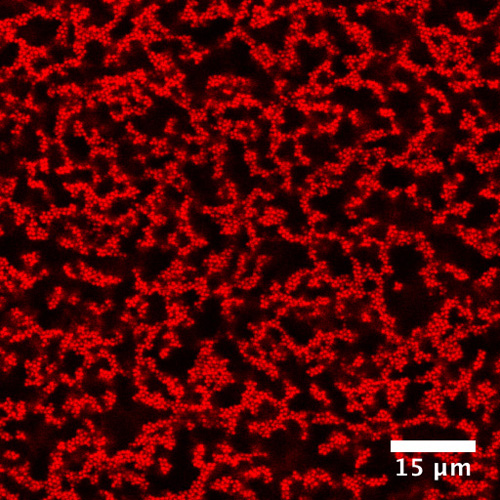 A 3D map of the particles inside a gel. University of Michigan researchers have found that a gel's solid-like properties can be predicted by the amount of rigid structure inside it and these structures are arranged in truss-like patterns not unlike the supports under cathedral roofs. Image courtesy of Lilian Hsiao

Her team, led by Michael Solomon, professor of chemical engineering, used experiments and computer simulations to explore how the structures inside gels might work. They took inspiration from the struts and trusses of architecture, such as railroad bridges, the roof of the Basilica di Santa Croce in Florence, and the cables and rods of “tensegrity” structures like geodesic domes.

“We took something we could see, something that we could stand on. We then applied this structural principle to gels, and found a correlation between how much stress they can support and how the trusses are arranged in the gels,” Hsiao said.

The team stumbled upon the question of how structure relates to solidity because of Hsiao’s experiments measuring the way that gels break up as they flow. She and Richmond Newman, a chemical engineering doctoral student, obtained 3D maps of the gel structures with particle-level detail. Then they started to notice that when the structure was more broken up, the gel was less solid.

They followed this up with experiments measuring the solidity of the gels. Meanwhile, Chemical Engineering Professor Sharon Glotzer’s group ran simulations to show how much of each gel was composed of rigid structures. The simulations revealed truss-like patterns not unlike the supports under cathedral roofs. When the team put the results together, they found that a gel’s solid-like properties could be predicted by the amount of rigid structure inside it.

“Of all the many particles in the gel, it turns out that only a small percentage—the ones in these microscopically rigid structures—end up determining how solid the material is,” Solomon said.

Although the rigid structures might account for just 10 percent of the particles in the gel, they are responsible for shouldering any load on it, he said. 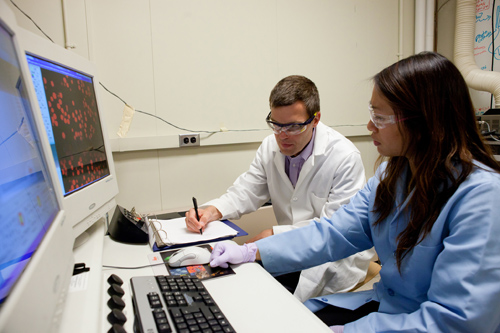 Professor Michael Solomon and doctoral student Lilian Hsiao, both in chemical engineering, discuss the architectural structures revealed by the 3D map of particles inside a gel. Image credit: Laura Rudich

Manufacturers currently change many ingredients in a complex recipe when they are trying to serve up a gel that has specific solid-like properties. For instance, they might add more particles, or choose particles that are more likely to assemble into groups. But the new findings could make the process much simpler. Instead of tweaking the recipe, they can find out what particle structure will give them the right solidity and then choose particles that can create this structure.

Solomon says that gels are important in pharmaceuticals to manufacture liquid medicines that deliver a reliable dose and in agriculture when a crop sprayer must uniformly treat a field with herbicide. The structure keeps the active ingredient evenly distributed in the gel. Specialized gels are also needed in developing fields like 3D printing. Inks containing ceramic or metal particles can print complex structures.

“Direct-write inks need to have tailored flow properties, and our study would help groups that work with these inks to design them,” Solomon said.

The researchers report the results in current print edition of the Proceedings of the National Academy of Sciences.