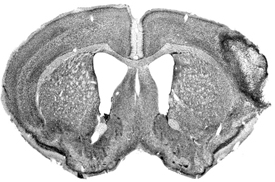 Mouse Stroke. An MRI of a mouse brain after stroke. The mouse section has been stained to show cell bodies. Image credit: University of California

A stroke wreaks havoc in the brain, destroying its cells and the connections between them. Depending on its severity and location, a stroke can impact someone’s life forever, affecting motor activity, speech, memories, and more.

The brain makes an attempt to rally by itself, sprouting a few new connections, called axons, that reconnect some areas of the brain. But the process is weak, and the older the brain, the poorer the repair. Still, understanding the cascade of molecular events that drive even this weak attempt could lead to developing drugs to boost and accelerate this healing process.

Now researchers at UCLA have achieved a promising first step. Reporting in the current online edition of the journal Nature Neuroscience, senior author Dr. S. Thomas Carmichael, a UCLA associate professor of neurology, and colleagues have, for the first time, identified in the mouse the molecular cascade that drives the process of reconnection or sprouting in the adult brain after stroke.

“We set out to learn three things,” said Carmichael, a member of the UCLA Stroke Center and the Brain Research Institute. “We hoped to identify the molecular program that activates brain cells — neurons — to form new connections after stroke; to understand how this molecular program changes in the aged versus the young adult brain, and the role each specific molecule plays in this program to control the sprouting of new connections after stroke.”

Investigators have long tried to identify molecules that control brain recovery after stroke, said Carmichael. The ideal way to do this is to isolate the actual neurons that are recovering, then determine what molecules control this process. However, until now that has not been possible. “Sprouting neurons” are relatively few in number, and they are sitting in brain regions amidst many more cells that are not recovering. “As a result, the unique signals that the recovering neurons are using are lost when all of the tissue in a particular brain region after stroke is sampled,” he said.

So the researchers developed two different fluorescent tracers to label cells that sprout a new connection after stroke. Once the cells were identified, the researchers could then isolate and study them. “This allowed us to identify the ‘sprouting transcriptome,’ ” said Carmichael. “The term means that the results identify all of the genes that a brain cell activates to form new connections after stroke. That was the first step; then we set out to identify several key molecules that play a role in axonal sprouting after stroke that were previously not recognized.”

The researchers were surprised by two things, said Carmichael.

First, they found that the neurons that sprout new connections after stroke activate a set of genes that broadly control the structure and accessibility of DNA. One such gene, termed ATRX, has not been linked before to axonal sprouting or brain recovery after injury. But, said Carmichael, it is important in brain development. “Our results show that brain cells activate this gene to form new connections after stroke.”

Secondly, the molecular program that controls the formation of new connections in the brain after stroke differs considerably between aged and young adults. “Stroke, of course, usually happens to the elderly,” he said. “These differences may explain in part why recovery is diminished in aged individuals; they respond to stroke with a very different genetic program of recovery.” And there was a more intriguing discovery: In the aged brain, neurons that sprout new connections not only activate genes to induce these new connections, they simultaneously activate genes that slow down or collapse these new connections. “It’s as if you are accelerating a car while at the same time hitting the brakes,” he said. “This response of aged brain cells may show why the aged brain does not respond and recover after stroke like the young adult’s.”

Finally, the researchers developed a new method of drug delivery in the brain after stroke to test the role of specific molecules in the sprouting transcriptome. After stroke, the area of damage gets absorbed and becomes a cavity. This cavity sits right next to the “peri-infarct tissue,” the part of the brain that is sprouting new connections and recovering. “We developed a way to fill the cavity with a natural biological material that releases brain repair drugs slowly over time directly to this peri-infarct tissue,” said Carmichael. The researchers added normal brain proteins to a sponge-like biopolymer hydrogel, which slowly released the neural repair agents. This promoted axonal sprouting in the brain after stroke. “This approach takes advantage of now-standard human neurosurgical approaches, in which injections can be targeted precisely to brain structures,” he said.

This research into stroke closely follows other research published by Carmichael last week in the journal Nature. That study showed another factor in the brain that limits recovery after stroke. Carmichael and colleagues found that stroke causes the brain to over-activate inhibitory signaling, causing the brain to be hypo-excitable. The UCLA team determined what molecules led to this increased brain inhibition after stroke, reversed the inhibitory signaling and enhanced recovery of function. The research also identified a promising drug therapy to help reverse the damaging effects of stroke.