This research, published in Scientific Reports, a journal of the Nature Publishing Group, could lead to a deeper understanding of how sperm move on their way to fertilization or other functions and how they react when encountering various toxins or chemicals.

The UCLA researchers, led by Aydogan Ozcan, an associate professor of electrical engineering and bioengineering, used a powerful lens-free holographic microscope that can capture the three-dimensional swimming patterns of more than a thousand sperm moving at the same time. 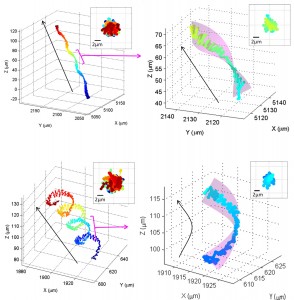 Sperm cells move in “chiral ribbon” patterns, their heads osculating from side to side as their flagella propel them. In some cases, their movements take a helical ribbon path much like the stripes that wrap around a barber’s pole. In other instances, their movements form a more complex twisted ribbon pattern, in which their bodies seem to follow the surface of a corkscrew (see image below). 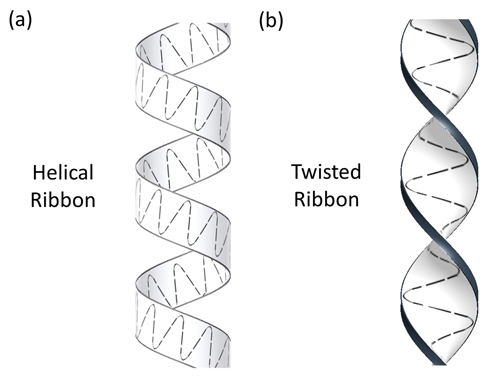 Ozcan-Chiral Ribbon Types. Sperm have been observed swimming in two ribbon patterns, one a helical ribbon like the stripe around a barber’s pole, the other a twisted ribbon pattern like that of a corkscrew. (Image courtesy of UCLA Engineering and Scientific Reports)

The tiny size of sperm head (about 3 to 4 micrometers) and sperm cells’ rapid movement (up to 100 micrometers per second) make it difficult for researchers to fully capture their activity in 3-D. However, computational lens-free imaging has major advantages over lens-based microscopes for imaging and tracking of such rapid and microscale motion.

“This type of movement has not been observed before in sperm of any species or other micro-swimmers,” Ozcan said. “Such high-throughput imaging studies of sperm motion can lead to advances in the understanding of fertilization process and might have use in animal-breeding applications in veterinary science.”

Ozcan said further testing is required to determine the underlying reasons for these patterns but suggested that these kinds of motion may assist cells in detecting the presence of stimuli such as heat or chemo-attractants, chemical substances that influence the migration of cells. They may also stem from an asymmetry in the heads of the sperm cells, which can spur the ribbon-like movement as sperm swim toward their destinations.

Ozcan said his team will advance these studies by observing 3-D sperm movement in the presence of various pharmaceuticals or toxins and will conduct high-throughput tests on sperm motility in 3-D.

Ozcan, a member of the California NanoSystems Institute at UCLA, also holds a faculty appointment in the department of surgery at the David Geffen School of Medicine at UCLA. He has developed several advances in lensless computational imaging, including an award-winning cell phone microscope that has significant potential to improve health care and health monitoring in underdeveloped areas of the world.

For more information on the Ozcan Research Group, visit https://innovate.ee.ucla.edu or https://org.ee.ucla.edu/.

Ozcan is a co-founder of Holomic LLC, a company that seeks to commercialize lens-free microscopy tools.