Listening to the Big Bang – in high fidelity

A decade ago, spurred by a question for a fifth-grade science project, University of Washington physicist John Cramer devised an audio recreation of the Big Bang that started our universe nearly 14 billion years ago.

Now, armed with more sophisticated data from a satellite mission observing the cosmic microwave background – a faint glow in the universe that acts as sort of a fossilized fingerprint of the Big Bang – Cramer has produced new recordings that fill in higher frequencies to create a fuller and richer sound. (The sound files run from 20 seconds to a little longer than 8 minutes.)

The effect is similar to what seismologists describe as a magnitude 9 earthquake causing the entire planet to actually ring. In this case, however, the ringing covered the entire universe – before it grew to such gargantuan proportions.

“Space-time itself is ringing when the universe is sufficiently small,” Cramer said.

In 2001, Cramer wrote a science-based column for Analog Science Fiction & Fact magazine describing the likely sound of the Big Bang based on cosmic microwave background radiation observations taken from balloon experiments and satellites.

A couple of years later that article prompted a question from a mother in Pennsylvania whose 11-year-old son was working on a project about the Big Bang: Is the sound of the Big Bang actually recorded anywhere?

Cramer answered that it wasn’t – but then began thinking that it could be. He used data from the cosmic microwave background on temperature fluctuations in the very early universe. The data on those wavelength changes were fed into a computer program called Mathematica, which converted them to sound. A 100-second recording represents the sound from about 380,000 years after the Big Bang until until about 760,000 years after the Big Bang.

“The original sound waves were not temperature variations, though, but were real sound waves propagating around the universe,” he said. 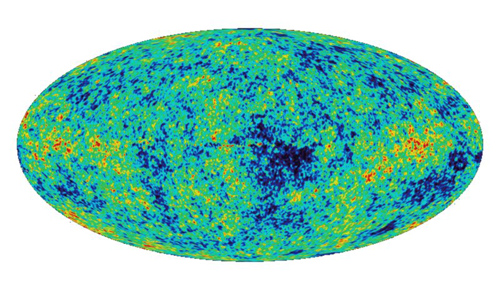 The Planck satellite mission mapped light temperature differences on the oldest surface known — the background sky left billions of years ago when our universe first became transparent to light. Those differences helped to recreate the sound of the Big Bang. Image credit: European Space Agency/Planck Collaboration

Cramer noted, however, that the 2003 data lacked high-frequency structure. More complete data were recently gathered by an international collaboration using the European Space Agency’s Planck satellite mission, which has detectors so sensitive that they can distinguish temperature variations of a few millionths of a degree in the cosmic microwave background. That data were released in late March and led to the new recordings.

As the universe cooled and expanded, it stretched the wavelengths to create “more of a bass instrument,” Cramer said. The sound gets lower as the wavelengths are stretched farther, and at first it gets louder but then gradually fades. The sound was, in fact, so “bass” that he had to boost the frequency 100 septillion times (that’s a 100 followed by 24 more zeroes) just to get the recordings into a range where they can be heard by humans.

Cramer is a UW physics professor who has been part of a large collaboration studying what the universe might have been like moments after the Big Bang by causing collisions between heavy ions such as gold in the Relativistic Heavy Ion Collider at Brookhaven National Laboratory in New York.

Creating a sound profile for the Big Bang was something to do on the side, Cramer said.

“It was an interesting thing to do that I wanted to share. It’s another way to look at the work these people are doing,” he said.