Researchers have discovered four previously unknown viruses that infect the Earth’s most abundant organism, the marine bacterium SAR11. Because of their huge numbers, these tiny players have critical roles in the global cycle of carbon and other nutrients.

The greatest battle in Earth’s history has been going on for hundreds of millions of years, isn’t over yet, and until now no one knew it existed, scientists reported today in the journal Nature.

In one corner is the Earth’s most abundant organism: SAR11, an ocean-living bacterium that survives where most other cells would die and plays a major role in the planet’s carbon cycle. It had been theorized that SAR11 was so small and widespread that it must be invulnerable to attack.

In the other corner, and so strange looking that scientists previously didn’t even recognize what they were, are “Pelagiphages,” viruses now known to infect SAR11 and routinely kill millions of these cells every second. And how this fight turns out is of more than casual interest, because SAR11 has a huge effect on the amount of carbon dioxide that enters the atmosphere, and the overall biology of the oceans.

“There’s a war going on in our oceans, a huge war, and we never even saw it,” said Stephen Giovannoni, a professor of microbiology at Oregon State University. “This is an important piece of the puzzle in how carbon is stored or released in the sea.” 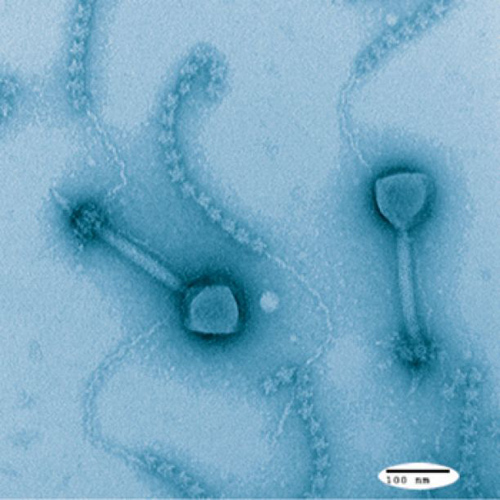 Marine viruses (a different kind) isolated from phytoplankton collected during the Tara Oceans Expedition. Lined up end to end, it would take about 250 of them to reach across a human hair. (Photo by: Jennifer Brum/Tucson Marine Phage Laboratory)

The paper in Nature describes four previously unknown viruses that infect SAR11. To prove the viruses were as abundant as their hosts, OSU teamed up with researchers at the University of Arizona’s Tucson Marine Phage Research Lab, led by Matthew Sullivan, who had developed accurate methods for measuring viral diversity in nature.

The analysis shows that the new viruses – like their hosts – are the most abundant on record.Sullivan is an assistant professor in the UA’s department of ecology and evolutionary biology with a joint appointment in the department of molecular and cellular biology.

“The methods and datasets developed by Matt’s lab at the University of Arizona will make it possible for a generation of marine microbiologists to more accurately determine viral distributions in nature,” Giovannoni said. “It’s a major step forward for the field.”

Giovannoni’s group discovered the Pelagiphage viral families by using “old-fashioned” research methods, growing the cells and viruses in a laboratory, instead of the tools of modern genomics, and found the new type of virus.

“Because they are so new, these viruses were virtually unrecognizable to us based on their DNA,” Giovannoni said.

“The viruses themselves, of course, appear to be just as abundant as SAR11,” he added. “Our colleagues at the UA demonstrated this with new technologies they developed for measuring viral diversity.”

Sullivan explained the method for discovering viruses in the oceans based on their genomes his group developed over four years is at least 1,000 times more accurate than previous methods.

Much of the analyses and datasets enabling the discovery of the viruses were generated by Bonnie Hurwitz, a former graduate student of Sullivan’s who is now program director of health informatics at the Arizona Health Sciences Center, with help from research scientist Bonnie Poulos and other members of the Tucson Marine Phage Laboratory.

Their work, soon to be published in the open-access journal PLoS One, resulted in the Pacific Ocean Virus dataset. This dataset, Sullivan explained, is the viral equivalent of the Global Ocean Sampling Expedition by former human genome researcher J. Craig Venter, who sailed across the world’s oceans sampling, sequencing and analyzing the DNA of the microorganisms living in these waters.

The new findings on SAR11 disprove the theory that the bacteria are immune to viral predation, Giovannoni and his co-authors said.

“In general, every living cell is vulnerable to viral infection,” said Giovannoni, who first discovered SAR11 in 1990. “What has been so puzzling about SAR11 was its sheer abundance, there was simply so much of it that some scientists believed it must not get attacked by viruses.”

What the new research shows, Giovannoni said, is that SAR11 is competitive, good at scavenging organic carbon, and effective at changing quickly to avoid infection. Because of this, it thrives and persists in abundance even though it’s constantly being killed by the new viruses that have been discovered.

SAR11 has several unique characteristics, including the smallest known genetic structure of any independent cell. Through sheer numbers, this microbe has a huge role in consuming organic carbon, which it uses to generate energy while producing carbon dioxide and water in the process. SAR11 recycles organic matter, providing the nutrients needed by algae to produce about half of the oxygen that enters Earth’s atmosphere every day.

This carbon cycle ultimately affects all plant and animal life on Earth.

“Because of their huge numbers, these cells are an important part of models that aim to understand and predict long-term patterns of carbon sequestration in the oceans,” Giovannoni said.

“Microbes fix half of the oxygen in the air we breathe and drive every biogeochemical cycle that fuels Earth,” Sullivan added. “Most of this happens in the oceans, and it turns out the most abundant microbes on the planet are the SAR11 bacteria.”

Other contributors to this research included scientists at the University of California, San Diego’s National Center for Microscopy and Imaging Research and the Monterey Bay Aquarium Research Institute, which provided opportunity to sample viruses from nature.

Funding for the methods development and genomic sequencing was provided by the Gordon and Betty Moore Foundation Marine Microbiology Initiative and the Department of Energy Joint Genome Institute.

– By David Stauth and Daniel Stolte

*Source: The University of Arizona (Published on February 13, 2013)