Researchers have discovered a key player in the molecular process that causes the communication breakdown between nerves in fatal muscle degeneration disease.

Researchers at the University of Arizona have taken an essential step forward in the quest to find the cause of amyotrophic lateral sclerosis, also known as ALS or Lou Gehrig’s disease. In the cells of flies, mice and humans with ALS, scientists at the UA have pinpointed a process that collapses when a critical protein’s blueprint is arrested on its way to protein construction. The study was published recently in the journal Cell Reports. 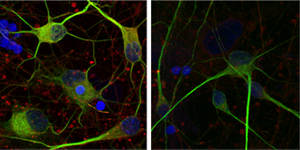 ALS is a neurodegenerative disease affecting more than 20,000 adults in the U.S. Its hallmark symptom is muscle paralysis, which is caused when nerves decay and stop sending messages to muscles. When the breathing muscles lose connection with their controlling neurons, the respiratory system fails and the patient dies; in nearly half of ALS cases, this happens within three years.

The mechanisms behind the neuron’s degeneration remained largely unknown until researchers in the UA Departments of Molecular and Cellular Biology, Neuroscience and Neurology identified a pair of proteins whose interaction causes disruption in neuron-to-muscle communication.

One protein, called TDP-43, previously had been identified as a common denominator in cases of ALS.  The protein shuttles messenger RNA — protein blueprints — from a cell’s nucleus to other cellular locations for further processing.

“We are very interested in identifying the RNA molecules processed by TDP-43.  In cases of ALS, RNA is not processed correctly, and that leads to motor neuron dysfunction,” said Daniela Zarnescu, professor in the Department of Molecular and Cellular Biology.

Researchers in Zarnescu’s lab have been investigating TDP-43’s involvement in neurodegenerative diseases for years. Using fruit flies as a model organism to unravel the molecular pathways inside the cell, Alyssa N. Coyne, a doctoral student in Zarnescu’s lab when the study was conducted, identified the product that results from the genetic blueprint chauffeured by TDP-43: another protein, called Hsc70-4. This protein helps nerves efficiently communicate with muscles.

The genetics of fruit flies are very well understood, and researchers can readily generate a strain of flies that carries mutations in a gene whose role they want to study. A mutation in TDP-43’s gene caused the flies to produce a higher-than-normal amount of the TDP-43 protein. Coyne found that flies producing more TDP-43 produced less of the protein Hsc70-4, suggesting that excess TDP-43 prevents the creation of Hsc70-4.

The mutation that generates too much TDP-43, Coyne found, also predisposes the protein to form aggregates, which are clumps of protein that cling to RNA.

“It’s like getting stuck in a piece of glue. As a result, the RNA molecules are not going anywhere,” Zarnescu said.

If the RNA encoding Hsc70-4 cannot move, then the cell cannot use it to make the Hsc70-4 protein.

Coyne discovered that without enough Hsc70-4, the flies took more time to right themselves after being rolled onto their backs — a sign that the flies’ nerve cells were slow to communicate with their muscles. Her next step was to identify what role Hsc70-4 plays in that communication.

Muscles move when they receive messages from their controlling nerves in the form of neurotransmitters. Vesicles — the shipping containers of the cell — filled with neurotransmitters move to the end of the nerve cell, where they release their contents into the gap between nerve and muscle. Then, the vesicles are pulled back into the nerve cell and refilled. This process is called the synaptic-vesicle cycle, and its efficiency is crucial to the quick communication between nerve and muscle. Coyne found that Hsc70-4 is responsible for ensuring this efficiency, as it works at the cell membrane to release and retrieve vesicles.

“If you don’t make the correct amount of this protein, then the synaptic-vesicle cycle will be less efficient. With time, this process will deteriorate, and that could potentially lead to the pulling away of the motor neuron axon from the muscle and paralysis,” Zarnescu said.

But would this mutation affect organisms other than flies?

“We validated our findings of decreased synaptic Hsc70 in mouse neurons as well as patient derived neurons,” Coyne said.

Researchers at Emory University and the University of Kansas studied mice that overexpressed TDP-43. With abnormally high amounts of TDP-43, the mouse neurons produced less HSPA8, the mammalian version of the fruit flies’ Hsc70-4.

Researchers at the Barrow Neurological Institute in Phoenix studied motor neurons from ALS patients who had the exact same mutation modeled in Coyne’s fruit flies. Just as in the mouse neurons, the mutated TDP-43 caused a significant decrease in the amount of HSPA8 created by the human nerve cells. Without HSPA8, the nerve deteriorates, resulting in the hallmark nerve-to-muscle communication collapse of ALS.

According to Coyne, now a postdoctoral fellow at Johns Hopkins University, the study is valuable because it identifies novel targets and pathways that could be used for development of future ALS treatments.