U.S. Citizenship May Be Determined At Random

EAST LANSING, Mich. — The fate of nearly half a million immigrants hoping for U.S. citizenship may have been determined randomly, at least in part, according to a new study by a Michigan State University researcher who found the high-stakes civics test isn’t a reliable measure of civics knowledge.

Questions are randomly selected by an immigration officer from a pool of 100. But contrary to ethical high-stakes testing standards, U.S. Citizenship and Immigration Services has never released data demonstrating the 100 questions are reliable or valid, she said. More problematic, according to Winke, is that some test forms may be more difficult than others. 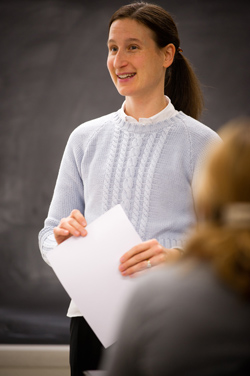 “If your citizenship status hangs upon this one test as it does for many, the award of citizenship or noncitizenship may be arbitrarily made, based on the form that’s pulled out of the drawer from the immigration officer,” Winke said.

Winke’s study, which is published in the winter edition of the journal Language Assessment Quarterly, is the first to measure the reliability of the test. She found that despite immigration services spending six years and $6.5 million to make the test more standardized and fair, it’s not.

USCIS rolled out a new test in 2008, and that’s the last time it was updated. That same year, immigration services received $375 million in fees from naturalization applicants and administered 1.65 million interviews, approving 1.05 million people for citizenship, Winke said.

Applicants spend $675 each to take the test and sometimes wait years to meet with an immigration officer. That’s why it’s baffling that immigration services doesn’t keep or publish data on the reliability of the test, Winke said.

To be reliable, the test should measure what Americans know and what noncitizens who haven’t studied for the test don’t know, Winke said. But in her research, Winke found 77 of the 100 possible questions were equally difficult for both groups.

Winke also found 13 questions were easier for noncitizens to answer. One such question: “Name one war fought by the United States in the 1900s.”

USCIS should collect data to determine which questions are hard and which are easy for Americans and noncitizens alike, Winke said, to ensure that only those questions that reliably assess Americans’ core civics knowledge are on the test.

For most high-stakes tests – such as SAT or ACT – testing companies collect and publish test data demonstrating the test is reliable. But immigration services doesn’t, Winke said.

“There’s a lot about accountability in testing and education these days. I think the same applies to our government,” Winke said. “As educators, we have to prove that every test under No Child Left Behind is reliable and valid, so why isn’t the government doing this for the civics test?”