ANN ARBOR, Mich.— Smaller companies that don’t get much news coverage can bridge the information gap with investors by tweeting, according to a study by Greg Miller, Hal White and Beth Blankespoor of the University of Michigan Ross School of Business.

“Firms have traditionally had to rely on the press to disseminate their information,” White, an assistant professor of accounting. “Unfortunately, small firms tend to get squeezed out of coverage leaving little to no options for these firms to get their information out to interested parties.”

But recent innovations in information technologies, such as Twitter, Really Simple Syndication (RSS) feeds and corporate e-mail alerts, allow managers to directly access investors on a frequent and real-time basis. And for smaller, less-visible companies, this can be a boon. 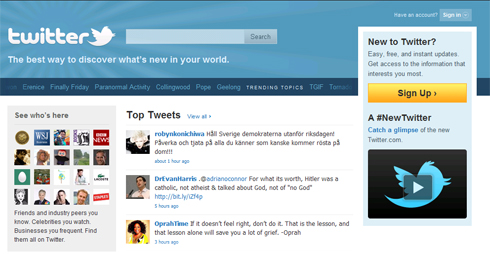 The researchers found that tweeting increased significantly around firm-initiated news events (press releases) and were driven strongly by tweets containing hyperlinks (75 percent included them). This suggests that companies use Twitter as a tool primarily for further dissemination of news, they say.“Dissemination plays a critical role in enhancing the effectiveness of firm disclosures,” said Miller, an associate professor of accounting. “After all, if investors or other intended recipients don’t receive the information, disclosures become meaningless.”

The study shows that tweeting during the time of a news event lowers a company’s bid-ask spread (the difference between the highest price a buyer is willing to pay for shares of stock and the lowest price a seller is willing to sell them). It also increases the number of shares available at each price.This effect is most prevalent for low-visibility firms—those that are smaller, have lower analyst coverage and have fewer shareholders.

“Overall, new technologies, such as Twitter, that allow firms to directly access investors offer several benefits,” said Blankespoor, a Ross School doctoral student. “For example, firms not only have more control over dissemination of their information, but they can also potentially reach a wider audience.”

The researchers are careful to point out that these advantages are not meant to justify Twitter and other information technologies as substitutes for information intermediaries, but rather as a complement to traditional dissemination channels.