The Arctic sea ice cover appears to have reached its minimum extent for the year, the third-lowest recorded since satellites began measuring sea ice extent in 1979, according to the University of Colorado at Boulder’s National Snow and Ice Data Center.

While this year’s September minimum extent was greater than 2007 and 2008, the two record-setting and near-record-setting low years, it is still significantly below the long-term average and well outside the range of natural climate variability, according to CU-Boulder’s NSIDC scientists. Most researchers believe the shrinking Arctic sea ice is tied to warming temperatures caused by an increase in human-produced greenhouse gases being pumped into Earth’s atmosphere.

On Sept. 10 the sea ice extent dropped to 1.84 million square miles, or 4.76 million square kilometers, and is likely the lowest ice extent of the year as sea ice appears to have begun its annual cycle of growth. 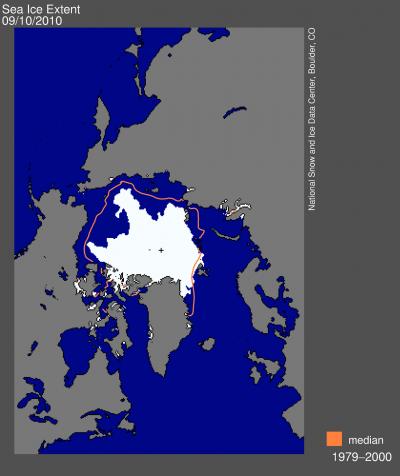 About the image: Arctic sea ice reached what appears to be the lowest 2010 extent, making it the third lowest extent in the satellite record. Image credit: CU-Boulder/National snow and Ice Data Center

“We are still looking at summers with an ice-free Arctic Ocean in perhaps 20 to 30 years,” said Serreze, also a professor in CU-Boulder’s geography department.

Since NSIDC researchers determine the minimum sea ice extent using a five-day running average, there is still a small chance the sea ice extent could fall slightly, said Serreze. CU-Boulder’s NSIDC will provide more detailed information in early October with a full analysis of the 2010 Arctic ice conditions, including aspects of the melt season and conditions heading into the winter ice-growth season.

NSIDC is part of CU-Boulder’s Cooperative Institute for Research in Environmental Sciences — a joint institute of CU-Boulder and the National Oceanic and Atmospheric Administration — and is funded primarily by NASA.