Ocean scientists have long known that juvenile coral reef fishes use coastal seagrass and mangrove habitats as nurseries, later moving as adults onto coral reefs. But the fishes’ movements, and the connections between different tropical habitats, are much more complex than previously realized, according to a study published September 3 in Proceedings of the National Academy of Sciences. The findings have important implications for management and protection of coral reefs and other marine environments.

A number of studies have demonstrated a strong relationship between the presence of coastal wetlands and offshore fish abundance and fisheries yield, but it has proved difficult to develop quantitative assessment of habitat use by fish or their movement among different habitats. “The rationale for this study,”says Simon Thorrold, a biologist at Woods Hole Oceanographic Institution (WHOI), “was to determine the relative importance of different nursery habitats to reef fishes that spend their adult lives on coral reefs but may spend at least part of their juvenile residency elsewhere.”

The study also advances understanding of the functional connectivity of coral reef fish in a tropical seascape, says WHOI biologist and study lead author Kelton McMahon. “Traditional methods of assessing nursery habitats – visual surveys of abundance and size of fish in different locations – provide important but indirect evidence of connectivity among essential habitats. We developed a quantitative method that identifies essential nursery habitat, and allows reconstruction of migration within the seascape.”

The method analyzes isotopic signatures recorded in fish tissue. These signatures, unique to each environment in which a fish lives and feeds, are laid down in its otoliths, or ear bones, creating a record similar to that of tree rings.

“Otoliths are constantly and permanently recording the conditions a fish is experiencing at any time,” explains Thorrold. What a fish eats can be traced back to a particular food web, which makes it possible to track where a fish went throughout its life. 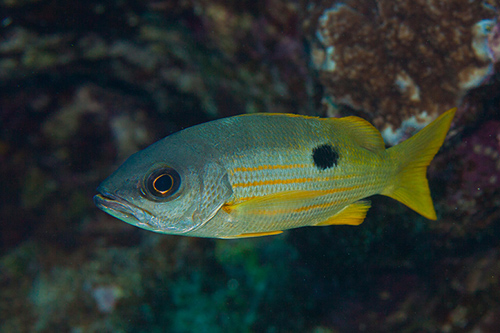 Pictured above is an Ehrenberg’s snapper (Lutjanus ehrenbergii)—a commercially important snapper widespread throughout tropical and subtropical waters. With gas chromatography, the researchers measured compounds in otoliths of individual fish, working their way back to layers created when each was a juvenile. (Image credit: Simon Thorrold, Woods Hole Oceanographic Institution)

Thorrold, McMahon, and Michael Berument of King Abdullah University of Science and Technology in Saudi Arabia first analyzed food webs in five specific habitats in the Red Sea off the northern coast of Saudi Arabia: coastal wetlands, coastal reefs near the shoreline, reefs on the continental shelf less than 60 meters deep, patch reefs around a continental offshore island, and oceanic reefs surrounded by deep open water. They used those data to create an isoscape, or map of the unique isotope signature of each location.

They then collected adult Ehrenberg’s snapper (Lutjanus ehrenbergii), a commercially important snapper widespread throughout tropical and subtropical waters. With gas chromatography, the researchers measured compounds in otoliths of individual fish, working their way back to layers created when each was a juvenile. They matched each fish’s signature to one on the isoscape, identifying with a high degree of accuracy the habitat an individual fish occupied as a juvenile.

This made it possible to look at movement of juvenile fish within the seascape at a level never before possible, revealing a few surprises. “We found that a number of juveniles had settled directly onto reefs, despite the fact that in several years of regular work in this area, we’d never visually observed them there,” says Thorrold. “If you just observed distribution of juveniles, you would say the only important nursery habitat is coastal wetlands. But that’s not true. Some fish settle right on the reefs, and the continental island proved to be very important habitat as well.”

In other words, coastal wetlands are important juvenile nursery habitat for snapper in the Red Sea, but snapper are not obligated to use them, as was previously thought. Instead, the fish showed surprising plasticity, using a wide variety of habitats. “Our results showed remarkable complexity in the use of different habitats and movement patterns among them,” McMahon says. Fish movements, the study makes clear, are more complex than a linear model of coastal fish moving out onto reefs. 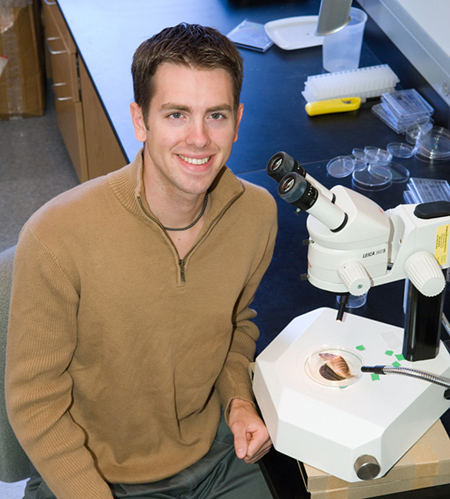 The analysis also showed that seascape configuration plays an important and perhaps underappreciated role in determining the connectivity among essential habitats. “We found that coral reef fish made remarkable long-distance migrations from coastal wetlands across deep open water – long considered a hard migration barrier for coral reef fish – to offshore reefs,” McMahon says. “That was, for me, the most surprising finding. Migration capability was far greater than we originally appreciated. It underscores the potential of significant connectivity within a large and complex tropical seascape.” These results are particularly timely, given the increasing use of spatial management approaches in coral reef ecosystems, including networked marine protected areas.

The implication is that it isn’t enough to protect adult habitat on coral reefs. Habitats that supply those reefs and the migration corridors that connect them also need protection. “As human activity continues to degrade and fragment tropical seascape habitats, quantitative understanding of the connectivity among them becomes increasingly important,” says McMahon.

“Protecting the reef protects the adult fishes, but not an important component of their life history, as juveniles,” says Thorrold. “It won’t work to protect the reef but, for example, allow a hotel to be built on the seagrass beds and mangroves.” 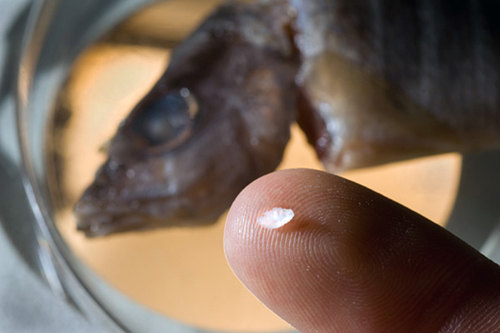 Otoliths, or ear bones, are constantly and permanently recording the conditions a fish is experiencing at any time. What a fish eats can be traced back to a particular food web, which makes it possible to track where a fish went throughout its life. (Image credit: Tom Kleindinst, Woods Hole Oceanographic Institution)

The study’s quantitative method also provides a way to estimate ecosystem services that specific habitats provide to fisheries yields within a seascape, allowing for a more accurate accounting of these services and potentially providing a way to determine suitable value for mitigation and remediation purposes.

“We haven’t known the value of those habitats to the reefs themselves when considering development,” says Thorrold. “This technique allows us to quantify the importance of different habitats, and that makes it possible to come up with reasonable biological valuations for them. It hasn’t been done yet, but is an important implication of the work going forward.”

An important next step, the researchers say, is to analyze other globally important coral reef or tropical seascapes to see how general these patterns are.