Light changes matter in ways that shape our world. Photons trigger changes in proteins in the eye to enable vision; sunlight splits water into hydrogen and oxygen and creates chemicals through photosynthesis; light causes electrons to flow in the semiconductors that make up solar cells; and new devices for consumers, industry, and medicine operate with photons instead of electrons. But directly measuring how light manipulates matter on the atomic scale has never been possible, until now.

An international team of scientists led by Thornton Glover of the U.S. Department of Energy’s Lawrence Berkeley National Laboratory (Berkeley Lab) used the Linac Coherent Light Source (LCLS) at the SLAC National Accelerator Laboratory to mix a pulse of superbright x-rays with a pulse of lower frequency, “optical” light from an ordinary laser. By aiming the combined pulses at a diamond sample, the team was able to measure the optical manipulation of chemical bonds in the crystal directly, on the scale of individual atoms.

The researchers report their work in the August 30, 2012 issue of the journal Nature. 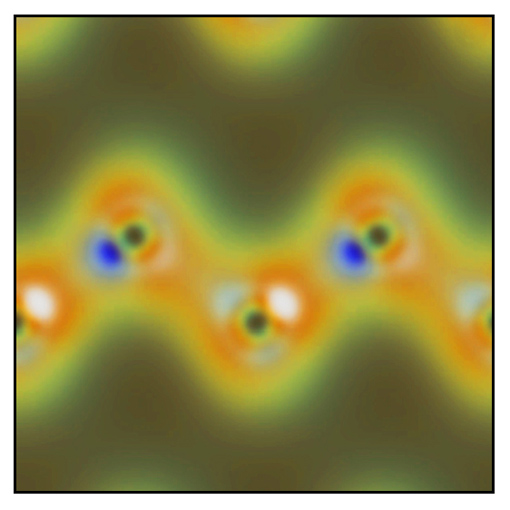 Simulated valence-charge density from x-ray and optical wave mixing shows the nuclei of carbon atoms as dark spots revealed by diffracted x-rays and the peaks of some of the bonds between them as white and blue spots induced by the polarized optical pulse. In diamond, the optical pulse primarily wiggles the charge that makes up chemical bonds. Image credit: Berkeley Lab

X-ray and optical wave-mixing is an x-ray diffraction technique similar to that long used in solving the structures of proteins and other biological molecules in crystalline form. But in contrast to conventional diffraction, wave mixing selectively probes how light reshapes the distribution of charge in a material. It does this by imposing a distinction between x‑rays scattered from optically perturbed charge and x‑rays scattered from unperturbed charge.

“You can think of the electrons orbiting atoms in a material as belonging to one of two groups,” says Glover. “The ‘active’ electrons are the outer, loosely bound valence electrons that participate in chemical reactions and form chemical bonds. The ‘spectator’ electrons are the ones tightly wrapped around the nucleus at the atom’s core.” 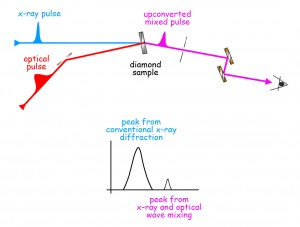 Pulses of 8,000-electron-volt x-rays from the LCLS are synchronized with 1.55 electron-volt pulses from an optical laser, so that both strike the diamond sample at the same time and mix to form upconverted pulses of 8,001.55 electron volts. The detector first sees the diffracted x ray pulse, and then, after the sample is gently “rocked,” the slightly more energetic mixed pulse. The optical pulse exerts localized force on the chemical bonds among the carbon atoms. Image credit: Berkeley Lab

Glover explains that “because the x-ray photon energy is large compared to the electron binding energy, in a typical scattering experiment all electrons scatter with comparable strength and are therefore more or less indistinguishable.” The core-electron signal usually swamps the weaker valence-charge signal because there are many more core electrons than valence electrons.

“So x-rays can tell you where atoms are, but they usually can’t reveal how the chemically important valence charge is distributed,” Glover says. “However, when light is also present with the x-rays, it wiggles some portion of the chemically relevant valence charge. X-rays scatter from this optically driven charge, and in doing so the x-ray photon energy is changed.”

The modified x-rays have a frequency (or energy) equal to the sum of the frequencies of both the original x‑ray pulse and the overlapping optical pulse. The change to a slightly higher energy provides a distinct signature, which distinguishes wave-mixing from conventional x‑ray diffraction.

“Conventional diffraction does not provide direct information on how the valence electrons respond to light, nor on the electric fields that arise in a material because of this response,” says Glover. “But with x-ray and optical wave mixing, the energy-modified x-rays selectively probe a material’s optically responsive valence charge.”

Beyond the ability to directly probe atomic-scale details of how light initiates such changes as chemical reactions or phase transitions, sensitivity to valence charge creates new opportunities to track the evolution of chemical bonds or conduction electrons in a material – something traditional x-ray diffraction does poorly. Different components of the valence charge can be probed by tuning the so-called optical pulse; higher-frequency pulses of extreme ultraviolet light, for example, probe a larger portion of valence charge.

Because mixing x-ray and optical light waves creates a new beam, which shows up as a slightly higher-energy peak on a graph of x‑ray diffraction, the process is called “sum frequency generation.” It was proposed almost half a century ago by Isaac Freund and Barry Levine of Bell Labs as a technique for probing the microscopic details of light’s interactions with matter, by separating information about the position of atoms from the response of valence charge exposed to light.

“The breadth of the science impact of LCLS is still before us,” says Jerome Hastings, a professor of photon science at the LCLS and an author of the Nature article. “What is clear is that it has the potential to extend nonlinear optics into the x-ray range as a useful tool. Wave mixing is an obvious choice, and this first experiment opens the door.”

Diamonds are just the beginning

Glover’s team chose diamond to demonstrate x-ray and optical wave mixing because diamond’s structure and electronic properties are already well known. With this test bed, wave mixing has proved its ability to study light-matter interactions on the atomic scale and has opened new opportunities for research.

“The easiest kinds of diffraction experiments are with crystals, and there’s lots to learn,” Glover says. “For example, light can be used to alter the magnetic order in advanced materials, yet it’s often unclear just what the light does, on the microscopic scale, to initiate these changes.”

Looking farther ahead, Glover imagines experiments that observe the dynamic evolution of a complex system as it evolves from the moment of initial excitation by light. Photosynthesis is a prime example, in which the energy of sunlight is transferred through a network of light-harvesting proteins into chemical reaction centers with almost no loss.

“Berkeley Lab’s Graham Fleming has shown that this virtually instantaneous energy transfer is intrinsically quantum mechanical,” Glover says. “Quantum entanglement plays an important role, as an excited electron simultaneously samples many spatially separated sites, probing to find the most efficient energy-transfer pathway. It would be great if we could use x-ray and optical wave mixing to make real-space images of this process as it’s happening, to learn more about the quantum aspects of the energy transfer.”

Such experiments will require high pulse-repetition rates that free electron lasers have not yet achieved. Synchrotron light sources like Berkeley Lab’s Advanced Light Source, although not as bright as FELs, have inherently high repetition rates and, says Glover, “may play a role in helping us assess the technical adjustments needed for high repetition-rate experiments.”

Light sources with repetition rates up to a million pulses per second may someday be able to do the job. Glover says, “FELs of the future will combine high-peak brightness with high repetition rate, and this combination will open new opportunities for examining the interactions of light and matter on the atomic scale.”