The Weird World of “Remote Heating”

College Park, Md.– A team of University of Maryland scientists have discovered that when electric current is run through carbon nanotubes, objects nearby heat up while the nanotubes themselves stay cool, like a toaster that burns bread without getting hot. Understanding this completely unexpected new phenomenon could lead to new ways of building computer processors that can run at higher speeds without overheating.

“This is a new phenomenon we’re observing, exclusively at the nanoscale, and it is completely contrary to our intuition and knowledge of Joule heating at larger scales-for example, in things like your toaster,” says first author Kamal Baloch, who conducted the research while a graduate student at the University of Maryland. “The nanotube’s electrons are bouncing off of something, but not its atoms. Somehow, the atoms of the neighboring materials-the silicon nitride substrate-are vibrating and getting hot instead.”

“The effect is a little bit weird,” admits John Cumings, an assistant professor in the Department of Materials Science and Engineering who oversaw the research project. He and Baloch have dubbed the phenomenon “remote Joule heating.”

For the UMD researchers, the experience of the discovery was like what you or I might have felt, if, on a seemingly ordinary morning, we began to make breakfast, only to find certain things happening that seem to violate normal reality. The toast is burned, but the toaster is cold. The switch on the stove is set to “HI” and the teapot is whistling, but the burner isn’t hot.

Of course, Baloch, Cumings and their colleagus weren’t making breakfast in a kitchen, but running experiments in an electron microscopy facility at the A. James Clark School of Engineering at the University of Maryland. They ran their experiments over and over, and the result was always the same: when they passed an electrical current through a carbon nanotube, the substrate below it grew hot enough to melt metal nanoparticles on its surface, but the nanotube itself seemed to stay cool, and so did the metal contacts attached to it. 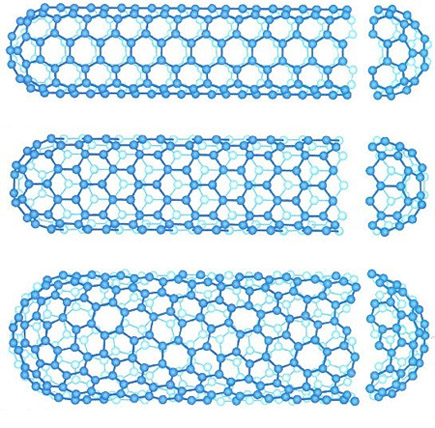 For us non-scientists, their experience might not seem so strange at first glance-after all, food cooked in a microwave oven gets hot while the oven itself stays close to room temperature. The problem is that Baloch and Cumings weren’t intentionally generating a microwave field. They were only passing a direct electrical current through the nanotube, which should have caused it to heat up. The data were telling them a story that didn’t seem to make any sense-one about a plugged-in toaster that could burn bread without getting hot.

A phenomenon known as “Joule heating” dictates that an electrical current will cause travelling electrons to bounce off the atoms of a metal wire, making them vibrate in place. These vibrations create heat, and any conducting wire should show the effect, including the heating elements of toasters, hair dryers, and electric stovetops. Carbon nanotubes are known to conduct electricity like nanoscale metallic wires, so Baloch and Cumings expected to see the same effect when they passed current through a carbon nanotube.

They used a technique developed in Cumings’s lab called electron thermal microscopy, which maps where heat is generated in nanoscale electrical devices, to observe the effect of the current on a nanotube. They expected to see heat traveling along the length of the nanotube to metal contacts attached to it. Instead, the heat seemed to jump directly to the silicon nitride substrate beneath, heating it up while leaving the nanotube relatively cold.

But how is it even possible for the nanotube’s electrons to vibrate the substrate’s atoms if they’re separated by distance, even one measuring in nanometers? Baloch and Cumings speculate a “third party” is involved: electrical fields.

“We believe that the nanotube’s electrons are creating electrical fields due to the current, and the substrate’s atoms are directly responding to those fields,” Cumings explains. “The transfer of energy is taking place through these intermediaries, and not because the nanotube’s electrons are bouncing off of the substrate’s atoms. While there is some analogy to a microwave oven, the physics behind the two phenomena is actually very different.”

Baloch adds that the remote Joule heating effect could have far reaching implications for computing technology. “What currently limits the performance of a computer’s processor is the speed at which it can run, and what limits the speed is the fact that it gets too hot,” he explains. “If you could find some way of getting rid of the waste heat more effectively, then it could run faster. A transistor that doesn’t dissipate energy within itself as heat, like the nanotubes in our experiment, could be a game-changer. This new mechanism of thermal transport would allow you to engineer your thermal conductor and electrical conductor separately, choosing the best properties for each without requiring the two to be the same material occupying the same region of space.”

For the moment, an air of mystery still surrounds the phenomenon, which has been observed only at the nanoscale, and only in carbon materials. The next steps are to determine if other materials can produce the effect, and if so, what properties they must have. “We now know that silicon nitride can absorb energy from a current-carrying nanotube in this way, but we would like to test other materials, such as semiconductors and other insulators,” Cumings explains. “If we can really understand how this phenomenon works, we could start engineering a new generation of nanoelectronics with integrated thermal management.”

This discovery was published in the April 8th advance online issue of Nature Nanotechnology. The research was supported by a grant from the U.S. Department of Energy Office of Basic Energy Sciences.