The origins of laughter

We know the benefits of laughter on health. But why do we laugh? What are the evolutionary origins of laughter and humour? Steven Légaré has asked these questions and has made them the subject of his master’s thesis, which he recently submitted to the Université de Montréal’s Department of Anthropology.

“Science provides few answers to these questions other than in psychology and neuroscience. From the perspective of anthropology, laughter and humour are often overlooked. However, it is a serious subject,” says the recent graduate. 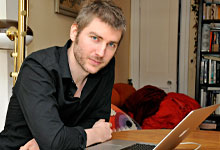 According to his research, laughter and humour exist in all cultures and times. Laughter is associated with an alteration of muscle tone and changes in brain activation. Studies speak of a state of stimulation followed by a state of relaxation, according to Légaré. In psychology, laughter is also defined as “a subjective state of well-being.” But we can also laugh out of discomfort, what we call “nervous” laughter. A person can also be happy but almost never laugh. And sense of humour varies considerably from one individual to another.

What then is the primary function of laughter and humour? “Communication principally,” says Légaré. “But it was not until the evolution of language that verbal humour could be involved in the process of socialization. Such humour is impossible if we have little mastery of language.”

The results of his analysis, which he compared with the empirical data found in the literature, seem to support his hypothesis: laughter is a universal behaviour. As in case of the vocalizations of apes in response to tickling, the primary function of laughter was to communicate an intention to play or indicate a desire to continue play in progress. The evolution of laughter and humour was marked by three distinct adaptations: acquisition of a theory of mind; language evolution; and recognition of incongruities in symbolic representations.

Social phenomenon
To reach this conclusion, the researcher analyzed five evolutionary theories about laughter and humour: social manipulation, socialization, sexual selection, honest signalling, and emotional contagion. The researcher extracted predictions he then compared to empirical work from various disciplines, including ethnology, psychology, and neurobiology. In conclusion, he proposed an evolutionary scenario that reconciles the various theories discussed.

“In the 3,000 publications listed in a recent bibliographic guide on the psychology of laughter and humour, the words “Darwin” and “evolution” appear only four and two times, respectively, while the concept of natural selection is completely absent,” says Légaré. “The transcultural recurrence of laughter and humour and the facial expressions with which they are associated nevertheless suggest a certain genetic determination.”

Universally recognized as a signal of positive emotions, laughter does not seem to be influenced by imitation or cultural transmission. “Children born deaf and blind reproduce this behaviour in appropriate contexts, even without being able to perceive laughter in others or to learn from it,” says Légaré. The researcher also notes that recent studies in neurobiology suggest that there are two types of laughter—Duchenne and non-Duchenne—each involving separate neural circuits. In his view, recognition of this distinction is crucial in understanding the evolution of laughter as a signal. “The functional and behavioural differences that characterize these types of laughter imply that they have independent evolutionary histories,” he says.

From laughter to verbal humour
Laughter and humour, which have been mysteries since time immemorial, were a source of fascination for Plato, Aristotle, Descartes, Kant, and Freud, who all wrote about this faculty apparently unique to humans. This does not mean, however, that laughter is totally absent from animal life. An archaic form is also observed in primates. Common in young apes, “mimic play” consists of exaggerated spreading of the lips and pushing the corners of the mouth forward while approaching an individual. It roughly means “Will you play with me?” or “I come as a friend.”

Several evolutionary mechanisms, including sexual selection, socialization, and emotional contagion, are evoked by various authors to explain the origin and role of laughter and humour, says Légaré. “Initially restricted to physical or social play, the behavioural program of Duchenne laughter was extended to the area of ideas, opening the way to the development of verbal humour.”

In his opinion, it is likely that the capacity for humour was influenced by the effect of sexual selection. As such, the expression of humour functioned during human evolution as an indicator of fitness. Once developed, verbal humour gradually gained in sophistication and complexity, which illustrates its remarkable cultural variability today. “In this regard,” says the researcher, “ethnology informs us that mockery, exaggeration, and irony are probably the oldest forms of humour, because they are universal. On the other hand, humour based on phonological, lexical, and syntactic ambiguities, practiced only in societies with writing, is necessarily more recent. The same goes for dark or absurd humour, as evidenced by their cultural contingency.”

The study by Steven Légaré was carried out under the supervision of Bernard Chapais, professor in the Department of Anthropology.