All living organisms rely on iron as an essential nutrient. In the ocean, iron’s abundance or scarcity means all the difference as it fuels the growth of plankton, the base of the ocean’s food web.

A new study by biogeochemists and glaciologists at Woods Hole Oceanographic Institution (WHOI) identifies a unexpectedly large source of iron to the North Atlantic – meltwater from glaciers and ice sheets, which may stimulate plankton growth during spring and summer. This source is likely to increase as melting of the Greenland ice sheet escalates under a warming climate. 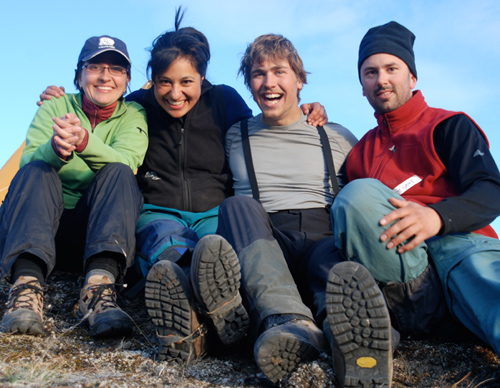 The study was published online in Nature Geoscience on March 10, 2013.

“There’s only been one other study looking at the amount of iron that’s being released in meltwater runoff itself,” says Maya Bhatia, a graduate of the MIT/WHOI Joint Program in Oceanography and Applied Ocean Sciences and Engineering, and the study’s lead author, “and that had reported high nanomolar concentrations. So to find iron in concentrations several orders of magnitude higher – in the micromolar range – was very surprising.”

Iron from wind-blown dust and river runoff fuels annual plankton blooms in the world’s ocean. Ice sheets and glaciers are now also thought to contribute iron from sediments on the bottom of calved icebergs and glacially-derived dust. Until now, meltwater runoff from glaciers and ice sheets was considered too dilute to carry much iron, although previous research has shown a strong correlation between the plankton blooms and the runoff from Greenland ice sheet.

“Glacial runoff has only recently been considered a potentially important source of nutrients that are useable, or bioavailable, to downstream ecosystems,” says Bhatia. “We believe our study now adds iron to that list of nutrients, and underscores the potential for a unique but as-yet-undetermined chemical impact from increasing ice sheet meltwater runoff.” 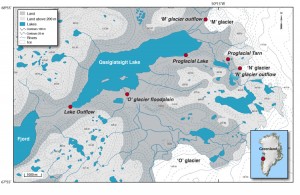 Research area: During the course of two expeditions to the Greenland ice sheet in May and July 2008, Bhatia and her colleagues collected samples from sites at three land-terminating glaciers. The meltwater from these glaciers travels through a flood plain and eventually drains into Qasigiatsigit Lake, before finally emptying into the fjord. (courtesy Maya Bhatia, Woods Hole Oceanographic Institution) (Click image to enlarge)

During the course of two expeditions to the Greenland ice sheet in May and July 2008, Bhatia and her colleagues collected samples from sites at several land-terminating glaciers on the western side of the Greenland ice sheet. The glaciers’ meltwater empties into a large lake, which eventually drains into an estuary system before reaching the open ocean. Their study reports levels of dissolved iron orders of magnitude higher than previously found for Greenland glacial runoff rivers.  When the WHOI team extrapolated their findings to calculate the contribution of iron from the entire ice sheet, they estimated its value to be within the range of that from dust deposition in the North Atlantic, which is believed to be the primary source of bioavailable iron to this ocean. This value is only an order of magnitude lower than the estimated annual contribution of iron from rivers worldwide.

When an ice sheet or glacier melts, most of the water doesn’t simply run off the surface of the ice sheet. Instead it first drains to the bedrock below the ice sheet through cracks and conduits called moulins and then exits in large runoff rivers.

“A lot of people think of a glacier and an ice sheet as a big block of ice,” says Bhatia, “but it’s actually quite a porous, complicated system underneath a glacier, with lots of moulins and crevasses leading to the bottom. Once you get into the bottom, there are large tunnels that these waters are passing through.” The more time the water spends in contact with the bedrock and sediments beneath the glacier, the more nutrients it picks up, including iron. 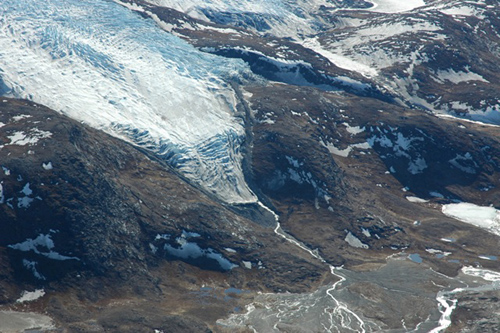 The research team collected samples from sites at three land-terminating glaciers on the western margin of the Greenland ice sheet. The primary glacial outflow sampled in this study was ‘N’ glacier, above. (Photo by Sarah Das, Woods Hole Oceanographic Institution)

The WHOI team says further research is needed to determine how much of this iron actually reaches the open ocean, as their study followed the meltwater from the edge of the glaciers to the large lake they empty into. For this study, the team assumed that the amount of iron filtered out as the water moves through estuaries before reaching the marine environment would be roughly the same for glacial systems as it is for river systems.

The researchers hope to do more work to confirm the study’s numbers by sampling over a larger geographical area. Additional research could also confirm whether this influx of iron is in a form that can be easily utilized by phytoplankton and therefore stimulates primary production in the ocean. 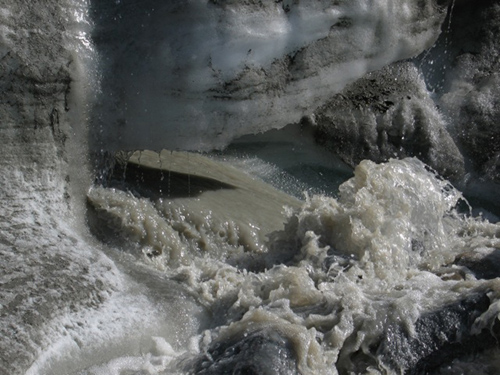 Close-up of the outlet of the ‘N’ glacier outflow. The meltwater exiting the base of the glacier is extremely turbid, with high suspended sediment loads from interaction with the bedrock and sediments beneath the glacier. (Photo by Ben Gready, University of Alberta)

“We don’t have enough historical measurements to say that this iron contribution is an increase over past conditions, but if it is working the way we think it is, the contribution would be greater as meltwater discharge increases,” Bhatia says. “It is interesting to think that, as ice sheets melt, there are biogeochemical considerations beyond changing sea level.” 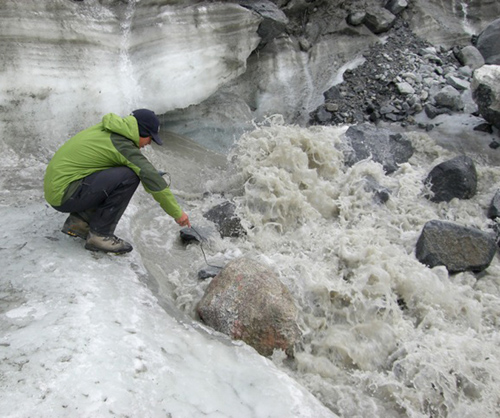 Field assistant Ben Gready measures the electrical conductivity of the ‘N’ glacier outflow. By making this measurement at different times of the season, scientists can compare concentrations of dissolved nutrients in meltwater passing through the subglacial environment. Early in the melt season, the network of tunnels and chasms under the glacier is less efficient at draining meltwater, extending the meltwater’s contact with sediments and bedrock, thus picking up more dissolved nutrients. (Photo by Matt Charette, Woods Hole Oceanographic Institution)

This research was supported by the WHOI Clark Arctic Research Initiative, the National Science Foundation, the WHOI Ocean and Climate Change Institute, and an AGU Horton Hydrology Grant.