Life as we know it is based upon the elements of carbon and oxygen. Now a team of physicists, including one from North Carolina State University, is looking at the conditions necessary to the formation of those two elements in the universe. They’ve found that when it comes to supporting life, the universe leaves very little margin for error.

Both carbon and oxygen are produced when helium burns inside of giant red stars. Carbon-12, an essential element we’re all made of, can only form when three alpha particles, or helium-4 nuclei, combine in a very specific way.  The key to formation is an excited state of carbon-12 known as the Hoyle state, and it has a very specific energy – measured at 379 keV (or 379,000 electron volts) above the energy of three alpha particles. Oxygen is produced by the combination of another alpha particle and carbon.

NC State physicist Dean Lee and German colleagues Evgeny Epelbaum, Hermann Krebs, Timo Laehde and Ulf-G. Meissner had previously confirmed the existence and structure of the Hoyle state with a numerical lattice that allowed the researchers to simulate how protons and neutrons interact. These protons and neutrons are made up of elementary particles called quarks. The light quark mass is one of the fundamental parameters of nature, and this mass affects particles’ energies.

In new lattice calculations done at the Juelich Supercomputer Centre the physicists found that just a slight variation in the light quark mass will change the energy of the Hoyle state, and this in turn would affect the production of carbon and oxygen in such a way that life as we know it wouldn’t exist. 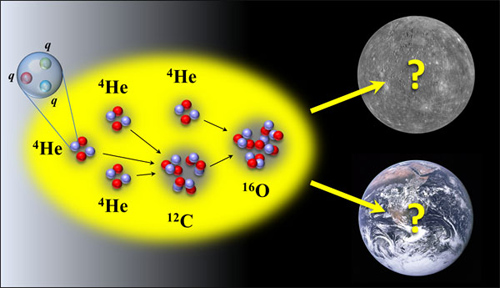 “The Hoyle state of carbon is key,” Lee says. “If the Hoyle state energy was at 479 keV or more above the three alpha particles, then the amount of carbon produced would be too low for carbon-based life.

“The same holds true for oxygen,” he adds. “If the Hoyle state energy were instead within 279 keV of the three alphas, then there would be plenty of carbon. But the stars would burn their helium into carbon much earlier in their life cycle. As a consequence, the stars would not be hot enough to produce sufficient oxygen for life. In our lattice simulations, we find that more than a 2 or 3 percent change in the light quark mass would lead to problems with the abundance of either carbon or oxygen in the universe.”

The work was funded by the U.S. Department of Energy; the Deutsche Forschungsgemeinschaft, Helmholtz-Gemeinschaft Deutscher Forschungszentren and Bundesministerium fuer Bildung und Forschung in Germany; European Union HadronPhysics3 Project and the European Research Council.