Google’s share went up 300 again. How this could happen? What’s the secret behind it??

Google’s CEO Eric Schmidt certainly has good connections with and there he got to know some powerful ‘Guru’s, who taught him some super-powerful Mantras. Now Mr. Schmidt repeats these mantras several times a day, and the whole business runs with super speed. 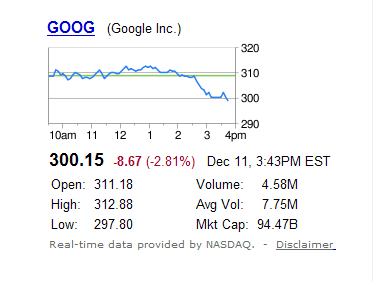 What’s a Mantra? – A Mantra is a holy word, not necessarily need to be a secret one, that the devotee takes seriously in his or her heart and repeats many times a day. After some time, the powerful positive vibrations that emanates from every repetition, can change the world around you 180°.

Only 180°, what about other degrees? Well that should be possible as well. Just Tryy. 🙂

So now you know ‘behind the curtain’ mechanisms and the mechanics. Microsoft and Yahoo! are missing the power of such specific business-oriented mantras. They should now seriously look for a Guru.

Are you still interested to know more about ‘Mantra’? Then you are highly recommended to navigate the digital library of 21st Century, widely, wildly and popularly know as – Wikipedia.