Question is, what the ‘political donors’, or contributors who are very active during election time, get in retun (to their investment)?

The answer is: favour.

They get ‘favour’ if their ‘recipient’ politician wins.

In 2010 when Google claimed, China hacked the Gmail accounts of human rights activists and trying to force the search giant to filter specific search results, the then Secretary of State Hillary Clinton immediatly intervened in the affair criticising the Chinese Government on behalf of Google. As far as I remember, later a Chinese government’s statement asking Mrs. Clinton to refrain from lobbying for a private company could stop the Secretary of State (officially). 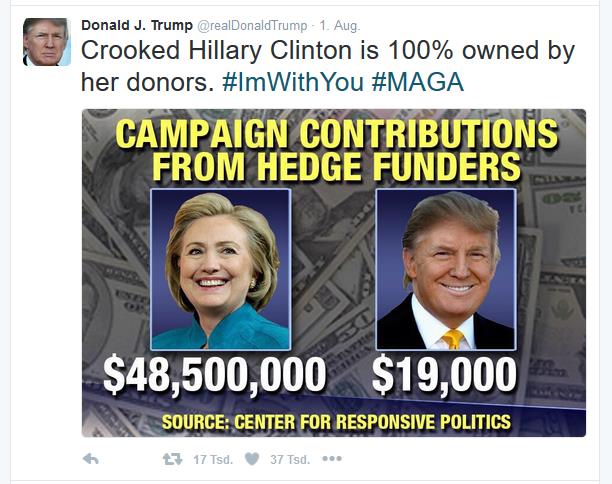 So Mrs. Clinton, who enjoys huge and generous ‘contributions’ for her election campaign, once elected, has to pay the ‘debt’ back. Billionaires don’t invest a single cent without any chances of getting the returns. If you have watched the reality TV show Shark Tank, you might have realized how investors like Mark Cuban count every cent before any investment. And now these ‘business magnets’ will donate or contribute (or otherway to say, invest) to your campaign without any hope to getting the return? – Of course not. Once elected, you will ‘favour’ them. That’s an unofficial aggrement. They will certainly shape the course of future ‘policy making’ to their favours.

The biggest problem is, these ‘business magnets’ business will grow exponentially both in ‘political’ and ‘market’ powers. So will begin a ‘monopoly’ and consumers will have no choice left rather than being trapped inside a manipulated highly developed and sophisticated ‘globalised market’ system.

Is there any way to keep the politics free from ‘corporate contributioins’?